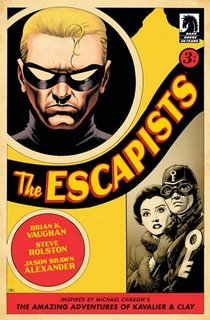 52 #19 (DC Comics) Well, now I’m even more skeptical about the wisdom of Booster Gold’s death (in the unlikely event that it’s even semi-permanent), as well as the rationale for it DC’s top man Dan DiDio gave in his post-mortem interview with Newsarama.com. If the character is truly no longer relevant to today’s readers, what’s the point of killing him off simply to replace him with someone who looks and acts the exact same? (And if ever there’s a superhero name that doesn’t deserve to be carried on, it’ s “Booster Gold”—what does that even mean?). Aside from my issues with this particular issue, it remains a thrilling read, with one hell of a major twist at the end. No idea what’s up with Supernova, or Bishop Lobo yet, though. The back up is the origin of Animal Man, featuring gorgeous sequential art by the old Animal Man cover artist Brian Bolland. Bolland interiors are just way too rare, and are always a welcome sight. Nitpicks: Colorist Alex Sinclair colors Booster II’s eyes and teeth a weird, solid blue in some panels.

A Man Called Kev #3(DC/WildStorm) Probably the strongest single issue of the five-part miniseries so far, Garth Ennis and Carlos Ezquerra’s “Thin Red Line of ‘Eroes When the Drums Begin To Roll” reveals the real reason the ground invasion of the first Iraq War (the one masterminded by the first Bush Administration) took so long to get started once hostilities commenced. It’s also the reason why someone wants Kev dead so bad. You’ll have to read the issue to find out for yourself, but I will say this is a perfect example of Ennis at his best—a thrilling little war-time adventure story, with some dark bloody humor at its center.

Aquaman: Sword of Atlantis #44 (DC) It’s been a long time coming—so long, in fact, that I’ve forgotten the last time I read an issue of this “monthly” book—but now that it’s finally out, we get to see the first meeting between the new Aquaman and the old Aquaman’s evil brother, Ocean Master. More interestingly, particularly to us Orin fans, is that the Dweller in the Depths seems to be starting to put together the fact that what he thought was a prophecy might actually be memories. Random New Earth Continuity Change: Is Ocean Master’s deal with Neron is null and void, or did the devil simply have mercy on Orm and decide he doesn’t have to hold onto his staff at all times to avoid excruciating pain after all? Nice little speech by the bad guy about why he prefers trying to master the ocean to living on the land anyway.

Civil War Files (Marvel) In a way this is the best Iron Man story in recent memory, as reading his writing about the rest of the world’s heroes and major political powers reveals more about him than you could imagine. He’s cold-hearted and arrogant, he thinks of his peers in terms of their powers and their ability to affect his plans. Everything is ultimately all about him: Could they help him? Hurt him? Could he take them in a fight? Should he have done something differently in the past to guide the path they ultimately ended up taking? Could he ever get around to banging Susan Richards? The seven credited writers do a consistently great job of creating a unified work with a unified voice, essentially 40 mini-essays boiling Marvel history ancient and recent down for readers, making for a great continuity catch up. As a reading experience, I think it’s well worth the $4, though I tend to be resistant to such books. This isn’t a comic book, but prose pretending to be a comic book—When I want to read a floppy, 40-page seven-by-ten inch works of fiction on Wednesday afternoons, I want them to be comics, not prose about comics, damn it! Even worse than the DC Secret Files and Origins Specials, which I almost always regret shelling out the dough for after reading, Civil War Files contains no actual comics/”sequential art” stories within, and no original art at all, save for that kick ass Steve McNiven, Dexter Vines and Morry Hollowell cover. Still, an awful lot of stuff gets covered within, and Marvel editorial apparently takes the opportunity to smooth over some of the inconsistencies that fans are wont to bitch about online. Reading this, it’s clear that Tony Stark realizes he is a changed man, and holds himself responsible for the New Warriors’ irresponsibility. Also acknowledged and addressed are Reed Richards’ seeming change of heart on superhuman registration over the last few years, the fact that the SRA is just a re-named and expanded version of the old Mutant Registration Act and even how Flag-Smasher seemed to appear in Civil War: Young Avengers & Runaways.

The Escapists #3 (Dark Horse Comics) Any comic book that prominently features a break-in of the Plain Dealer’s offices and a discussion of my favorite Ohio newspaper is a must-read in my book (Quick Caleb fact: My first professional writing gig was with the PD, contributing to their old teenage-written “N.E.X.T.” section). Brian K. Vaughan’s cheeky meta-metafictional script, Steve Rolston and Jason Shawn Alexannder’s amazing art, and a sweet cover from John Cassaday should make it a must-read in just about everybody else’s book too, I imagine.

Green Lantern #13 (DC) In this month’s (late) issue, the Cyborg Superman just wants to deliver exposition, but no one seems to want to listen. At one point, he even cuts in with, “All these years and you’ve never once asked me why I chose Coast City for destruction.” Hal Jordan doesn’t really seem to care, but the Cyborg goes ahead and tells him anyway, as well as explaining why Arisia’s not dead after all. (Hal Jordan, meanwhile, spends some time explaining things to readers too, like why it was actually okay that he was sleeping with a 13-year-old alien girl—turns out that on her planet, 13 years is the equivalent of 241 years on Earth. See, he wasn’t robbing the cradle, but the grave). It’s sort of unfortunate that Johns seems to be un-writing the last 20 years worth of Green Lantern history rather than moving it forward, but it’s at least as fun to see it occurring sped up in reverse as it was to watch it originally unfold. The part people will be talking about all month, however, is the second-to-last-panel, with its surprising relevance to one of DC’s best ongoing titles (Reviewed above).

JLA: Classified #27 (DC) The JLA teams up with the president of the United States, and engages in some dog wagging, while their secret identities infiltrate two fictional South American countries on the verge of all-out war using illegal WMDs (That’s Weapons of Meta-Human Destruction). With Wally West and Orin MIA and young upstarts filling in for them, with Kyle Rayner having retired from Green Lantern-ing to do his Ion thing and with J’onn J’onnz dressing like a Skrull and acting like a total dick, it’s a pleasure to see the Big Seven version of the JLA here, particularly as drawn by Plunkett and Nguyen.

Sam Noir: Samurai Detective #1 (Image Comics) I admit I initially wrote this book off based simply on it's title--It's a godawful title, way too obvious by half, and sounds like a limp parody of two genres. Well, if you didn't pick it up on the shops on Wednesday, do yourself a favor, go back to your comic shop, and plunk down your $2.99. It's an incredible read. Manny Trembley and Eric A. Anderson have the sound and look of crime fiction and samurai films and comics down so perfectly that it's more a genre mash-up than parody. And there are lines of half-serious dialogue I can read over and over, and they never seem any less funny. Like, "Nobody ever expects a fella to jump out of his third story window. People should expect those types of things. I do. That's why I jump out of windows. Cuz' nobody thinks of it." And that's just one panel. Easily the book of the week.
Posted by Caleb at 7:40 PM