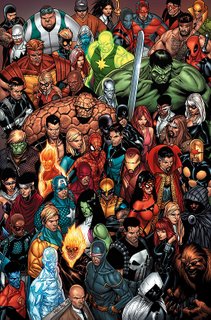 --Tony Stark is an arrogant dick. He’s offered dozens of example of his arrogance and dickishness throughout his appearances in the Marvel Universe lately, but man, he even comes across like an arrogant dick in his writing.

--Atlantean history makes for inadvertently hilarious reading. Particularly any and all off-handed references to the Seal People.

--The Marvel character whose physique mine most closely resembles is Speedball. We’re the exact same height, and he only outweighs me by five pounds. The next closest is reporter Sally Floyd. So I guess I either need to start working out more, or get myself some kinetic energy-based powers.

--Just because you’re an arrogant dick doesn’t mean you can’t also be funny sometimes. For example, “In retrospect, I'd have to say that was pretty much the most humbling alien robot fight I’ve ever had.”

--No Marvel artist ever draws Wolverine correctly to scale, if this 5’3 height statistic is accurate.

--Susan “Invisible Woman” Storm is the curviest 120-pound woman in the world. Does she have hollow bones , or what?

--Robbie “Speedball” Baldwin’s powers are really fucking confusing. Even when simply written about in straightforward prose, I still can’t understand them: “The energy permeated Robert’s body, creating a kinetic energy field that enabled him to absorb any impact without harm, but with the disadvantage that sufficient force would activate the field, bubbles of pure and weightless kinetic force surrounding his person, with or without intent. The energy also saturated his clothing, possibly setting up the same atomic-level transfiguration phenomenon integral to unstable molecutles but shaped on the subconscious psionic level, with the result that the field’s activation also transformed his clothing into, for all intent and purposes, a super-hero costume and mask.”

Um, what? And this is part of a daily intelligence briefing for President George W. Bush? Good luck getting him to understand all of that.
Posted by Caleb at 6:22 PM