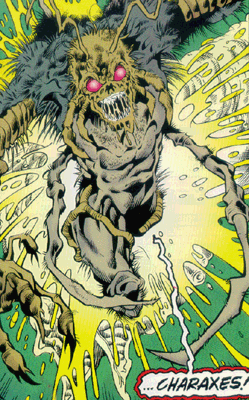 The very first writing about comic books I’d ever done--way back before I’d ever earned my first byline writing about anything, way back in the olden days before the Internet was ubiquitous, when comic books still had letter pages--was as a way too frequent letter hack in the back pages of Batman comics.

As a teenager, it was still a huge thrill to see my name in print, and an even bigger thrill when the editors would respond to my letters in print (Peter Tomasi and Jordan B. Gorfinkel probably being the two that printed my letters most often). One of the more curt responses I’d ever gotten from Gorfinkel was regarding Robin #23-#24, the “Underworld Unleashed” tie-in issues in which Drury Walker sells his soul to Neron, transforming from Killer Moth into “Charaxes,” a killer moth man monster thing.

Rereading these issues, writer Chuck Dixon did do an incredibly solid job. I didn’t always like the directions he went with Tim Drake, but Dixon was really good at characterization and action plots. But changing Killer Moth into Charaxes seemed like a terrible mistake to me at the time. The essential lameness of a guy dressed like a moth, the incredible idiocy of his very oxymoron of a name, seemed to be what distinguished Killer Moth from so many other villains.

In short, his lameness made him unique, so why take that lameness away (That lameness, by the way, could be exploited to tell good stories—at the time, I was thinking of Alan Grant and Tim Sale’s Shadow of the Bat arc “The Misfits,” in which Killer Moth joined with similar loser villains Catman and Calendar Man to get some respect, but Killer Moth’s lameness has since been key in other cool stories, notably his appearances on Cartoon Network’s animated Teen Titans and in Batgirl: Year One.

Charaxes, on the other hand, was just one more half-man, half-animal monster for Batman and Robin to fight, no different from Killer Croc or the then feral Man-Bat. I wrote a letter saying all of this (and bitching about Tim Drake’s romance—I had a hard time buying a 14-year-old going to high school, serving as a vigilante crimefighter and having time for girls), and Gorfinkel printed it, and disagreed. Rather strongly. I recently revisited my longbox to find the issue it was printed in--Robin #11--to re-read Gorfinkel's thoughts about Charaxes vs. Killer Moth: “I doubt that anything I am going to say now wil change your mind about anything, so I’ll be brief. With Charaxes, we now have a real Player for the Batman, and Robin, to contend with. And what Super-hero comic couldn’t use another true threat to spice up his/her adventures?”

Well, that was about ten years ago. In that time, I don’t think I’ve seen a single Charaxes story told, though the character has appeared in the background of some panels and had some cameos here and there.

Earlier this year in the pages of Infinite Crisis, DC completely rejiggered their shared fictional setting, the DCU, with a new continuity, bringing a lot of dead characters back to life, and changing things big or small within their fictional history.

If you read the eight-part “Face the Face” story that ran through Batman and Detective and was released in a trade paperback collection this week, you’ll notice on page 90 Batman and Robin start flying their Batplane toward a robbery, which Robin descends to solo to bust up. A robbery being committed by Killer Moth. Not Charaxes, who was apparently one of the things changed during the continuity rejiggering, but Killer Moth, in his old, lame suit.