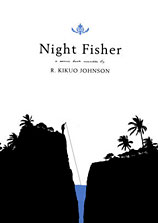 Why’d I Wait?: The debut work of a newcomer, the book had little to recommend it other than the fact that it had a nice cover and that its publisher, Fantagraphics, tends not to publish much in the way of crap. Still, I never trust writers whose names start with an initial and go by their middle names instead, and I’m always skeptical of graphic novels that are so insecure that need to define what exactly they are on the cover (Night Fisher, for example, insists on being called “a comic book novella” on its cover, instead of a graphic novel).

Why Now?: Facing the prospect of eating dinner alone in a restaurant, I needed to read something, and didn’t have anything on me, so I needed to grab something on the way out of the library, preferably something that was a graphic novel, and that I haven’t read before.

Well?: Coming of age stories are like opinions—everyone’s got one, but not every one is worth listening to. Johnson’s is. While it’s not billed as an autobiography, it certainly feels true, with a lot of details that seem too specific and random to come entirely from the imagination. The book’s title comes form a hobby formerly enjoyed by our protagonist Loren Foster and his friend Shane. As they near the end of their high school careers in Hawaii, and start to grow estranged from one another, however, night fishing becomes a convenient excuse for being out all night. The pair are both ace students at an expensive and prestigious college prep private school, but Shane has begun experimenting with drugs, and has thus grown distant from Loren…at least until he finally invites him into the new world with him.

Johnson’s black and white art also calls to mind Clowes’ work, though Johnson’s is at once more vague and more realistic; almost impressionistic in its ability to get so much representation out of such minimal line work, particularly when it comes to faces and expressions (Loren, who wears glasses, doesn’t even seem to have any eyes for passages of the book).

Johnson fills in the story with some pretty effective, symbolic imagery and fantasy sequences, including a particularly brilliant visual description of what getting high on “batu” feels like (Sorry, I have no idea exactaly what kind of drug that's slang for, orther than the fact that it's something you smoke).

The exotic setting and details for such a universal tale give Johnson’s coming of age story an instant leg up on so many others, and the minimal nature of the story itself, and the way so many of its conflicts rear their heads and trail off, give this “comic book novella” a powerful emotional impact. Of course, it’s possible Johnson just didn’t know how to end it, but that’s the beauty of the open-ended ending—if the rest of the story is good enough, you can get away with it. Johnson does. It will be interesting to see where he goes next.

Would I Travel Back in Time to Buy it Off the Shelf?: Eh, no, and I probably won’t be adding it to my personal library in the near future. It was certainly a rewarding read, but not exactly a must own book that I could see myself returning to again and again, nor the sort of book I could imagine forcing into the hands of others.
Posted by Caleb at 3:37 PM