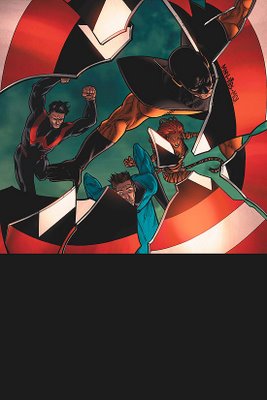 This is it folks, the big one, the halfway point, the issue where someone dies. I’ve been racking my brain (and scouring my copy of Civil War Files for clues) to try and figure out who, and this is the list of suspects I’ve come up with, in order of likelihood:

1.) Hercules—He seems a little out of place being featured so prominently alongside Cap, Daredevil, Falcon and the other street-level, anti-registration heroes. Plus, he’s a longtime Avenger, whose death would have a serious impact on both sides of the conflict, and since is presumably Thor who does the accidental killing, then there’s no better demonstration of the thunder god’s power than to have him kill off another divine hero.

2.) Goliath—Even more so than Hercules, I have no idea what the hell Goliath is doing in this story. He’s been on so many covers, and been given a disproportianate amount of panel-time, given his staus in the Marvel Universe. As a guy who’s power is to grow giant, he’s a redundant hero so wouldn’t be missed all that much, but, more importantly, Mark Millar hates giant superheroes, and is always looking for excuses to slot them. Stature's the only other anti-reg giant, and she’s a teenage girl in a popular series, so Goliath it is.

3.) The Falcon—Nothing would make Cap go apeshit faster than the Falcon getting accidentally killed by Iron Man’s pro-registration side, would it? If there’s one death that would escalate the conflict like crazy, it’s Falcon’s.

*I had originally mistook Songbird for Mockingbird, mixing the Thunderbolt up with an old Batman villainess. I corrected it above. The other two villains are Taskmaster and the Jester, as is pointed out in the comments section below.
Posted by Caleb at 7:22 PM

The other Lady is Songbird instead of Mockingbird and the white hooded guy is Taskmaster. :) Who that guy in the back is, no idea.

It's the old Daredevil villian, the Jester.

Thanks for catching me and correcting me. Yeah, Ihad the wrong 'bird; that was indeed Songbird, the current Thunderbolt and future Avenger (at least according to Avengers Forever), but I guess I had the Batman villainess on my brain.

Good call on Takmaster, and the other guy is indeed the Jester, according to all the Civil War blather going down online this past week.