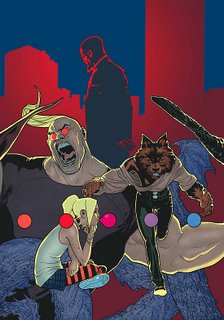 52 #20 (DC Comics) The secret origin of the Emerald Eye of Ekron is revealed, and it’s as satisfactorily inspired and obvious. Most of the action is superheroic, as the space set battle some sort of space locusts, but we also check in with Steel, who’s been keeping busy as a volunteer fireman, and Supernova, who floats into the Batcave and has a looksee around, until his eyes fall on the Infinity Gauntlet (or at least Jeph Loeb’s version of it). The back-up is the origin of Adam Strange by Kevin Nowlan. The Kuberts (who drew the Man of Two Worlds storyline suggested at the end of the story) or Pascal Ferry (who drew Planet Heist) would have been better choices; sure, the latter’s exclusive to Marvel now, but surely the Kuberts could have found the time to draw nine stinking panels.

Astonishing X-Men #17 (Marvel Comics) It’s cool that Joss Whedon is playing with some Grant Morrison additions to the X-iverse, particularly considering Marvel’s company-wide efforts to undo all of Morrison’s innovations, but I sort of wish he would have left Cassandra Nova out of it—I’m completely lost as to what the Hellfire Club’s motivation is, if the characters that make it up are real or not, and what that thing they want Kitty to retrieve for them is exactly (Having no idea what’s going on is a common problem when reading X-Men comics). Otherwise, Whedon continues to do a nice job with the characters, particularly Kitty, and there’s a cool twist when a mole on the X-Men team is revealed. The last page has what should be a bigger twist, but it’s similarity to the way Morrison ended a previous invasion of the mansion by Cassandra Nova takes away a lot of the punch. The scene in which Wolverine regains his personality, thanks to the timely intervention of his own personal version of spinach, ranks among the coolest Wolverine moments of them all. A special note to those without Japanese friends to ask to help translate: She says something along the lines of “Why can’t you be asleep like everyone else.”

Blade #1 (Marvel) He was the first Marvel character to make it to the big screen—not counting Howard the Duck, whose film I’m still trying to forget—and yet for some reason Marvel’s had trouble making a comic starring their vampire-slaying Daywalker work in the years since Wesley Snipes brought him to life. Er, death. Un-death? Regardless, the latest try seems poised to succeed. Writer Marc Guggenheim pits Blade against a vampire Spider-Man who was turned by none other than Dracula himself, but that’s just a warm-up (and a convenient excuse to put Spidey on the cover to boost sales). The real action is divided between Blade’s discovery of a vampire conspiracy that has infiltrated SHIELD and a re-telling of his origin. It’s a deftly handled first issue, one that packs in quite a bit of story and gives us a good glimpse of what’s on the horizon. The art, by Howard Chaykin, is pretty great stuff, much stronger than his first issue of Hawkgirl. Good to see the man getting so much mainstream work these days.

Civil War #4 (Marvel Comics) With this issue, we pass the halfway point of the monumental Marvel series, and, appropriately, things escalate like crazy, with Thor’s return revealed and explained, a very big death occurring, Marvel’s first family splintering, new characters joining the fight, some leaving the fight, and some switching sides. Mark Millar is certainly telling a gigantic, pulse-pounding, can’t-wait-until-the-next-issue series, but as soon as I put the issue down, I couldn’t stop wondering about where Marvel Comics could go from here. At the very least, it will be hard to ever look past Tony Stark and Reed Richards’ actions here—hell, even Hank Pym, the Wasp and the other Pro-Reg heroes seem like total shitheels for going along with them. It’s been a couple years now, and I still haven’t been able to think of the “Power Pact” in a heroic light, ever since what they did to Dr. Light and Batman was revealed in Identity Crisis. And what they did is nothing compared to what Stark, Richards and their allies do to one former friend here.

Birds of Prey #98 (DC) This issue we get yet another Bat-female. As a Cassandra Cain fan, I’m still smarting from DC’s nonsensical character assassination of Batgirl II, and am not quite ready to deal with Batgirl III just yet, although writer Gail Simone sure does present her appearance as a puzzler, seeing as how she has some sort of superspeed or teleportation powers, plus seems to know the secret IDs of the main three Birds. Simone almost makes what would have been a sweet reference to All-Star Batman and Robin, the Boy, I Wonder When the Next Issue of This Book Will Come Out? when Batgirl III introduces herself, if Simone didn’t censor it for religious content. The line is actually, “I’m the goddamn Batman,” not, “I’m the damn Batman.” And because I just can’t let what DC’s done to Cassandra Cain go, it’s worth noting that Oracle decides to look into the whereabouts of Batgirl III here, but has yet to search for Batgirl II. What the hell is that all about?

Conan #32 (Dark Horse Comics) Kurt Busiek returns from the DC Universe to continue the origin story of Conan, the occasionally running “Born on the Battlefield,” lushly illustrated by Greg Ruth. In this installment, Conan has hit puberty and already started bedding frails like the B.C. version of James Bond. He also proves that if he didn’t grow up to become a thief, barbarian and king, he would have made a hell of a professional bull rider.

Conan and the Songs of the Dead #3 (Dark Horse) Dear Joe R. Lansdale: Please write every Conan comic books from now on.

Marvel Adventures Avengers #5 (Marvel) Note to self: Be sure to read the credits more carefully before snapping up books. I would have passed on this ish if I had noticed in time that it was Tony Bedard rather than Jeff Parker who was scripting it, since it’s Parker’s writing that’s kept me interested in the title. Still, Bedard does a decent enough job. I can’t say I enjoyed the book, but it certainly wasn’t poorly done. And given the developments of Civil War this week, this title just got all the more important—It may be the only place you can expect to see Captain America and Iron Man getting along from now on.

Runaways #20 (Marvel) Given that writer Brian K. Vaughan and artist Adrian Alphona (who sits this ish out, with Mike Norton and Craig Yeung filling in) have announced their departure from the book, and that Joss Whedon will be coming on next, the book suddenly has an unfortunate, lame-duck vibe about it. The Runaways continue to do battle with the giant monster wrecking L.A., while Chase and Old Lace seek out the Gibborim to do a deal that will bring Gert back from the dead.

Superman #656 (DC) Alien spaceship crashes down in Russian wilderness, Soviets recover it and perform tests on the alien found within, alien escapes bent on revenge, hero fights alien. It’s hard to imagine a more played out plot for a superhero comic, but somehow writer Kurt Busiek and his top-notch art team make it seem like this is the first time anyone’s ever written that story. Plus, I’m loving what they’ve done with Arion, and can’t wait to see where that plotline’s going.

Testament #10 (DC/Vertigo) The sad thing is, “Get tagged and you’re it” probably would sell RFID tags to today’s youth. I’d be a hell of a lot more comfortable with Douglas Rushkoff’s near-future sci-fi/political thriller if the future it presented didn’t feel so damn much like our present.

Union Jack #1 (Marvel) Britain’s working class hero, an Old World answer to Captain America, is enlisted by his government to lead a team of international hero on a desperate hunt to find and stop eight super-powered terrorists before they destroy large chunks of London, and the people living on them. Writer Christos N. Gage’s premise is solid, although the bickering between Jewish mutant Sabra and Saudi Arabian hero Arabian Knight is predictable and tiresome, and this story seems to be in poor taste, considering the actual terror attacks on London. Union Jack’s an interesting character though, with a cool look, and penciller Mike Perkins turns out some sweet action-packed art to go along with Gage’s story.

X-Factor #11 (Marvel) Writer Peter David has just added a fascinating new twist on to mutant evolution, tying it into European folklore in a novel and interesting way. The characters and their interaction has always been this titles strongest selling point, but now the plot is finally starting to catch up. Quicksilver seems terribly out of place, however, especially given the way he just pops in for a few panels before prancing off.
Posted by Caleb at 7:43 PM