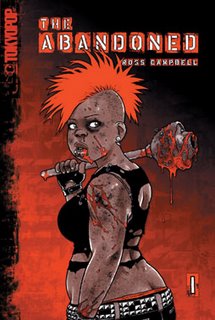 The Abandoned (Tokyopop), by Ross Campbell

Why’d I Wait?: All I knew of the book from seeing it on the shelf was what I saw on the cover. The image was that of a full-figured black woman with a red mohawk, holding a bloody plunger and splattered with blood. The author credit revealed that the book was created by someone who wasn’t Japanese, meaning it wasn’t really manga, despite the fact that it was published in Tokyopop’s typical manga format. Finally, the back cover included a picture of zombies. As a comic book reader, fan and critic, and as a film critic, I am soooo goddam sick of zombies.

Why Now?:Well, had I flipped through the book in the comic shop the first time I saw it, I probably wouldn’t have waited at all. All it took to sell me on it off the library’s shelf was a quick flip through, which revealed creator Ross Campbell’s awesome, sexy punk character designs, squirmy gore and violence scenes and a gray, white and red palette that was hard to resist.

Well?: The post-millennial resurrection of zombies on the big screen is nothing compared to the revival the undead cannibals have seen in comics—hardly a week ever goes without at least one book featuring the slowly walking undead seeing release. At times, it seems like zombies are getting to be the new superheroes, they’ve become so ubiquitous. So if creators are even going to bother with zombie stories these days, they need to have an incredible hook just to be interesting, let alone to stand out from the rest of the crowded field (Walking Dead’s endless nature, The Savage Brothers’ lived-in vibe and The Last Christmas’ use of Santa and his elves as zombie fighters are some pretty good examples of decent hooks).

Campbell’s fantastic art and the hand-crafted feel of the book (his is the only credit, and the letters feel like the intimate, hand-scribed ones of a little indy comic, despite the professional glossiness of the art) are probably enough to push this zombie apocalypse to the top of the heap, but that’s hardly the only selling point to this 200-page epic.

Campbell also has a point to his zombie apocalypse, in the form of a Big Idea like those in the first few George Romero Living Dead movies, and his cast is an incredibly colorful one, filled with the types of characters one sees too rarely in any kind of comics or pop stories, and certainly not in any from this particular genre.

After Hurricane Riley strikes the southwestern United States, turning out the lights in our heroes’ hometown of Savannah, something strange happens. Just about everyone except our heroes suddenly drops dead. But they don’t stay that way long. Moments later, they rise and start seeking out human flesh, which they bite right off whoever is in their way in gory, red chomps (Campbell eschews ultraviolence and over-theatricality in his gore. When someone bleeds from a bite or wound, or, worse yet, has pieces of their flesh removed by the handful, the red stuff looks like it would in real life, I imagine, rather than coming out in gushers and sprays. When someone is eaten here, they seem like terrified meat, rather than a cinematic punchline).

Just why is it that everyone except our heroes have been turned into zombies? The unhappy birthdays some of them suffer spell it out—everyone over the age of 23 dies and comes back. Which brings us to Campbell’s Big Idea: In The Abandoned, we see a modern society which literally eats it’s young; where you die as soon as you enter adulthood, and then sustain yourself off devouring youth. As a metaphor, it isn’t subtle, but there’s little subtlety in The Abandoned, nor should there be, really. As a plot point, it cranks the suspense and drama up from 11 to 1100. Even in the unlikely chance our teenage heroes can somehow survive the constant zombie attacks, it is quite literally only a matter of time before they themselves become zombies.

As for those heroes, the main one is the punk chick from the cover, Rylie. A seventeen-year-old who works at I Scream, a zombie-themed ice cream parlor owned and operated by white sisters Nikki and Cam and who volunteers at an old folks home. She’s ecstatic that her “true-love-to-be” Naomi is moving to town, and arrives the day before the night where everything goes to hell.

Those four, plus fat, mean girl Mae, big, black Ben and his little white ex-boyfriend John comprise the cast. The only ones who’s sexual identity is revealed at all are gay, itself something of a rarity, but they’re also all punk rock Southern teens with accents, something else you rarely see, and though they’re all fairly pop culture savvy (Rylie used to wish for a zombie invasion, and I Scream has flavors like Nut of the Living Dead), they’re not smart-ass know-it-alls like the kids from the Scream movies.

The women are also refreshingly realistic in their proportions and variety. Naomi and Cam are skinny and boyish; Nikki buxom and hippy; Rylie full-figured; Mae zaftig to the point of obesity. Yet Campbell makes them all seem sexy, even the huge, bull dog-faced Mae, in some scenes. Part of it is their sense of style and the tiny clothes Campbell dresses them in, but it’s also the realism and care with which he renders them. When we first meet Rylie, she’s simply wearing her panties and drooling in her bed; when she moves to get up, Campbell draws all of her curves, concentrating and eroticizing the bulge of her belly as she bends just as much as her breasts or butt.

The Abandonded thus ignores the MPAA’s weird double standard where extreme violence is more acceptable than sexuality, homosexuality and nudity. And while the book is definitely sexy in a Suicide Girls kind of way and does contain some romance, it’s a definitely of the zombie apocalypse genre, rather than the romance genre. There are passages of gory panels that are truly horrifying, in part because we got to know the characters getting eaten so well before Campbell killed them off, and in part because he has such a wildly cruel imagination when it comes to hurting them (a bit involving Rylie and a shard of broken glass that I found myself inadvertently shielding my eyes while reading leaps back to mind).

Despite the invasion of zombie invasion books in comic shops today, The Abandoned is the only serious competition The Walking Dead has to its thus far undisputed title as King of All Zombie Comics. Tokyopop’s website says two more volumes are forthcoming, and I eagerly await both, though I’m a little surprised to hear it—the story told in the first volume is so complete, I assumed it was the entire story.

Would I Travel Back In Time to Buy it Off the Shelf?: Hell yeah. But luckily, I don’t have to, as it’s still on sale.
Posted by Caleb at 1:45 PM