Thursday night we checked out the Namor portion of the 1965 edition of Jules Feiffer's The Great Comic Book Heroes, so now let's turn our attention to another Golden Age great who's been active superheroing for decades, despite his inability to make purchases from most convenience stores (on account of those blasted no shirt...no service store policies). 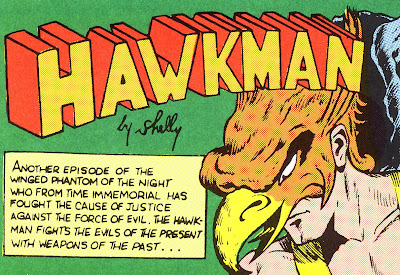 That's right, Hawkman! This is, of course, the original, Golden Age version of Hawkman, not the alien policeman Silver Age version or the amalgated Confusing Version I Don't Understand which is currently part of Justice Society of America's sprawling ensemble cast. Despite the seeming simplicity of his schtick—Hey, what if we took one of the hawkmen from Flash Gordon and made him a hero named, uh, Hawkman!—he actually has a double gimick, laid out in the two sentences in that little box. In addition to dressing up and flying like a hawk, he also "fights the evils of the present with the weapons of the past."

But what he really had going for him was how fucking weird he was. Look at that mask. Look at it. Does it make any sense? There's a bird mouth, right above his person mouth...he's like a two-mouthed bird man. I love this helmet. There's something to be said for the Silver Age Hawkman, with his creepy giant hawk eyes, but the eccentricity of this particular costume really can't be beat.

But enough about costuming; let's see what Sheldon Moldoff has in store for the Winged Wonder...

The adventure begins with Carter Hall—The Hawkman—wearing a robe and reading the newspaper. "Strange, this attack" he thinks. "One was made last month on the king of Emporia. And before that an attack on the premier of Frappe! I wonder what's behind them..."

I wonder if we'll find out in the course of this story...

Soon—as in, the very next panel—Hall is at the opera: 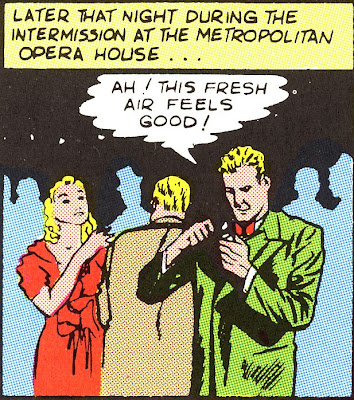 Yes, this fresh air feels so good, why not foul it with some pipe smoke? If only you'd brought your cigars! Please note that Golden Age Hawkman is blonde and wears a green suit with a bow tie. He looks an awful lot like his contemporary, the much-maligned JSA member Johnny Thunder, doesn't he?

In the next panel, he engages in some Golden Age racial profiling: 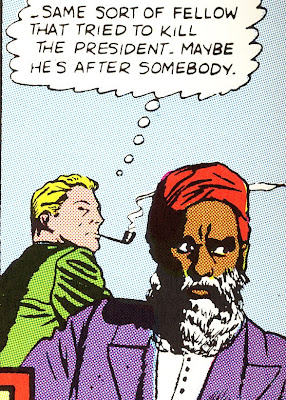 According to the newspaper he was perusing, the attacker was merely described as "a fanatical Easterner": 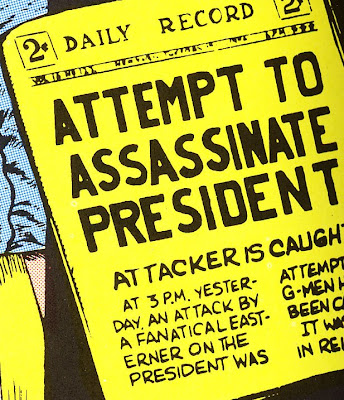 Of course, perhaps there's somethign to be said for racial profiling, as before Hall can even exhale his first lungful of pipe-smoke, the bearded, be-turbaned fellow pulls a huge blade from somewhere, shouting, 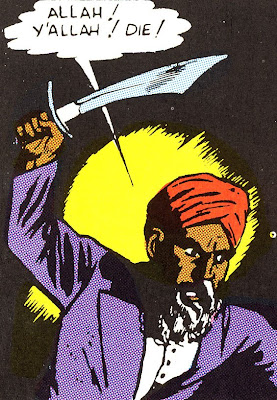 "The crazed Easterner leaps for a young blonde..." the caption reads, as we get a tight close-up of a screaming blonde girl, but "Carter Hall interferes!" by elbowing the crazed Easterner in the beard and saying "This'll hold you!"

And that was all on the very first page of the story. Man, comics sure didn't mess around back then.

On the next page, Hall identifies the dagger as a "Khanjur," and talks with a policeman who has arrived to take "the Easterner" away. When he turns to find the girl, she's completely disappeared, but hold on, what's this in his pocket?

Why, that's rather forward of her... I like the last panel of this sequence. Hall looks like he's about to strike her with his wave, and she flinches.

She immediately starts telling our handsome, bow-tied hero that she's going to "Araby to-night," and that the sect of assassins formed by Hassan Ibn Sadah in 1070 has been revived. They plan on murdering those in authority and all countries and seting up their own rulers. So, a pretty ambitious plot. But how does Ione Craig know all this? 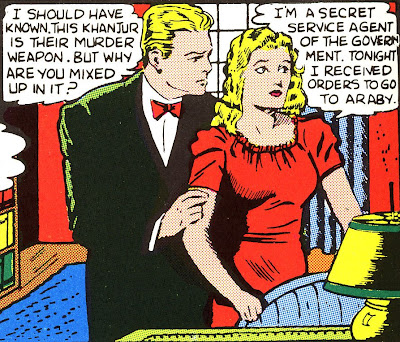 Well, she's oviously not that secret an agent, if she blabs about her status to a complete stranger she just met. Hall stalks off, smoking another pipe, and decides on a plan of action. Once home, he straps on his fannypack and prepares to shadow the pretty agent: 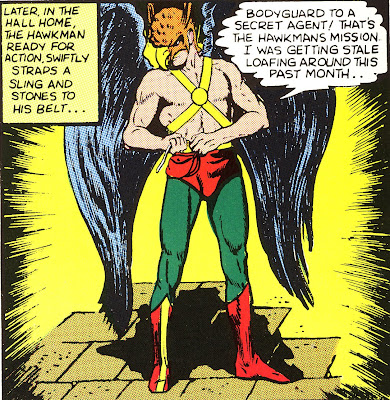 This leads to a pretty comical page of The Hawkman flying behind Craig's ship, day and night. At night, he holds on to two ropes attached to the back of the ship and apparently sleeps in the air while being pulled behind it.

Once in Cairo, he presents himself to Craig and offers her his assistance. Showing the shrewd, suspicious mind of an international spy, she decides to trust this second, masked, shirtless stranger, giving him a map of the area and the assignment of finding Alamut, the city of assassins.

It proves an easy enough task for a man with wings. Craig finds her own way there, when she is accosted by two assassins in a dark street. Hawkman is sneaking around the grounds of the palace when he spies Hassan Ibn Sadah, the descendant of the original Sadah, who plans to be "the first ruler of all the world!"

Hawkman thinks to himself, "If I can lay low that Hassan nut! I can end all this nonsense!" 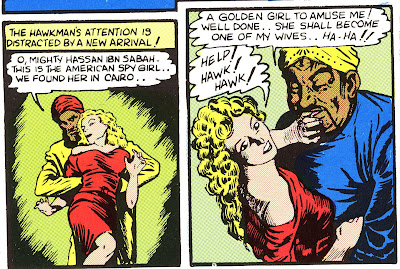 Hawkman's unable to hit Hassan without endangering Craig, so he uses his sling to kill the guy next to Hassan, and then retreats until nightfall. Then he creeps through the palace, beaning guards with his sling, until he enters the "lavish feasting room" of Hassan, puts his hands on his hips, and announes, "Good evening gentlemen...sorry to disturb your party!" 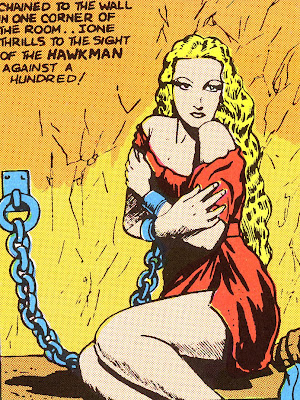 Sure, she thrills to the sight of the Hawkman against a hundred, but Moldoff doesn't show us this thrilling scene, simply an image of Craig thrilling to it. Hmm...perhaps he chose wisely; that is a pretty sexy panel. For a panel in a Hawkman strip, anyway.

Only eleven panels left! Better wrap this story up! Hassan screams, "Kill him! Kill him!", Hawkman grabs a scimitar from the wall, he fights with the power of ten men, slashes the chains that hold Craig, and take us home, Shelly: 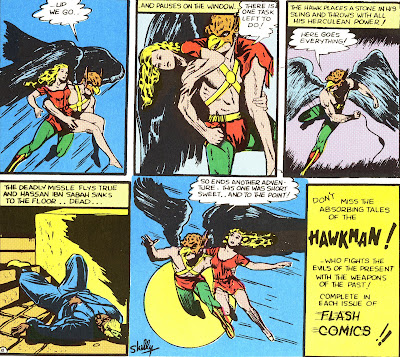 What sort of half-assed intelligence agency sends a blond white woman undercover in a nation of swarthy types not known for their progressive attitudes to women's lib? What sort of half-assed secret agent wears a red cocktail dress to infiltrate a secret hideout? See, this is how we wound up backing the Shah and losing Iran in the first place.

First off, isn't Hawkman married to his eternally reincarnated lady-love?

fourth, the only Golden Age Hawkman strips I've seen before had seriously primitive artwork. This is some pretty sophisticated artwork that looks like it's flown in from a different genre. That picture of Carter holding Craig ("go to Araby") is unusually god by Golden Age standards, isn't it? But look at the look on her face-- she belongs somewhere else, not in a superhero book...

If she starts babbleing to the first handsome blond pipesmoker that she sees, can you imagine what she'll start spilling when they start to actually...question her?

Exactly how can he fly, when he's got her slung over his shoulders? Wouldn't that interfere with his wings?

I get the feeling that the writer had just finished watching Rudolf Valentino in "the Sheik" and decided that it would make a GREAT comic book. And...of course, it does.

...and this is why adore Hawkman.

At first I read that balloon as saying "Allah, y'all!" That would have been great.