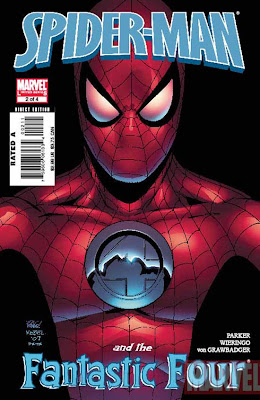 My sole disappointment with last year's Jeff Parker and Mike Wieringo collaboration Spider-Man and The Fantastic Four was that when Reed Richards went off to space and asked Spidey to fill-in as a member of the Four for him, he handed him a little press-on FF badge (seen above).

In my head, I was imagining how cool it would have been if Spidey got a special Fantastic Four-ized version of his costume to wear with the team, in their blue-colors and with a "4" instead of a Spider icon.

So I was downright giddy when I saw the "What If?" FF of Spider-Man, Wolverine, The Hulk and Ghost Rider don their own versions of FF uniforms in Wednesday's What If This Was the Fantastic Four?: A Tribute to Mike Wieringo.

The premise of the story, also written by Parker with art begun but sadly never finished by the late Wieringo, is that Reed, Johnny and Sue died and Ben gave up super-heroing to raise Franklin Richards, leaving Spidey, Wolvie, Ghostie and ol' Jade Jaws...er, ol' Gray Gams to fill set up shop in The Baxter Building and slap down the likes of Blastaar and Dr. Doom on the behalf of their predecessors.

Here's a wonderful little sequence in which they go into action in their new uniforms for the first time. Peter Parker and Johnny Blaze/Danny Ketch (it was supposed to be the latter, but is drawn like the former; it's explained in the book) are at an oudoor cafe when The Sandman appears, and Ghost Rider vomits out a signal flare for his commrades: 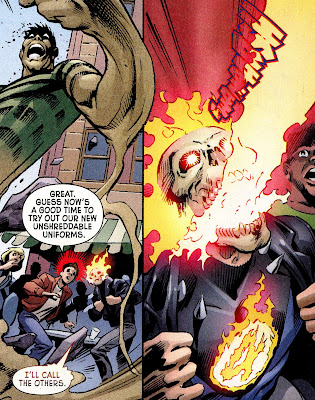 (The first two panels were penciled by Alan Davis; the third one is by Casey Jones)

Here's the best look at all four of the costumes at the same time, from the original cover by David Williams and Arthur Adams (They ended up re-purposing a splash page Wieringo drew as the cover for the project, once it transtitioned from just another Marvel What If? special into a tribute book): 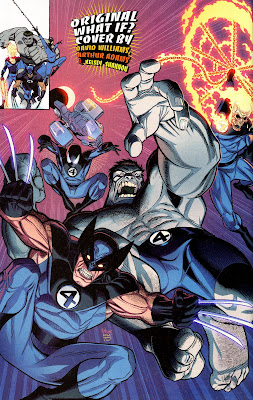 In the upper lefthand corner is another group shot of the team in their uniforms. He's not credited with it on the page, but that sure looks like Wieringo's work, doesn't it? 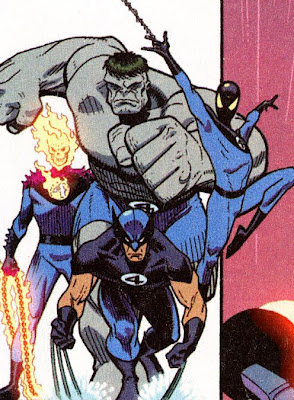 Finally, Chris Giarrusso contribued a one-page Mini Marvels strip to the book, featuring the "random group of four heroes" filling in for the official Four. In the last panel, they also adopt Fantastic Four-ized versions of their costumes:

I like the way the other costumes match one another better, but these are kinda fun too, particularly Hulk's and Ghost Rider's.

Hey, check it out: 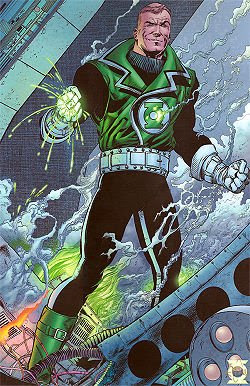 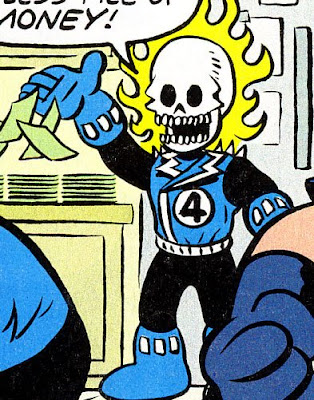 Looks like Ghostie is a Guy Gardner fan. It works for him.
Posted by Caleb at 11:10 AM

Man, have they ever collected all the great Chris Giarrusso little comics they occassionally throw into the back of a book? Because those things always kill me, but they're never in the trades.

Thanks for pointing out the costume similarity--I'd never have noticed it otherwise. Of course, now I'm thinking how much I would enjoy a Guy Gardner/Ghost Rider team-up written and drawn by Chris Giarrusso. In fact, the next big Avengers/JLA crossover should be drawn by Chris G. But that's probably one of my dreams that will never come true.