Batman's dad was a mad scientist and now he's in hell

If you're reading Grant Morrison's current Batman story arc, "Batman R.I.P.," then you know that the mad Scottish writer has had an unseen villain taking apart the pieces of the Batman mythos as a way of striking against our hero. In the latest issue, #677, we learn that his parents weren't the saints he and we always thought they were. In a meeting with some guy whos never identified but is probably supposed to be the mayor, Commissioner Gordon learns "the sordid secret history of Thomas and Martha Wayne."

The Wayne patriarch "evidently transformed into a brutal, foul-mouthed degenerate on booze and hard drugs," may not have actually been Bruce's dad (implying that Alfred Pennyworth was sleeping with Martha Wayne as well), and might have had her killed and faked his own death. Gordon is also shown a picture of the Waynes, and is told "The girl with the brain-dead expression and the needle tracks in the middle is Martha."

If you're not reading it (and given how poor pencil artist Tony Daniel's work is, I can't say I blame you), you may have read about this plot point over at Blog@Newsarama, which linked to a few sentences in the Glasgow Sunday Mail about it.

Morrison is quoted as saying: "People have killed off characters in the past. What I'm doing is worse than death." It's certainly a clever way to get at Batman, right up there with Mark Waid's idea to have a villain kidnap the Dark Knight's parents' corpses.

I'm going to assume the former. Mostly because I already know what Thomas Wayne was really all about before his murder: He was a mad scientist who tried to play God and sunder the veil between life and death, and he's been languishing in pirate hell ever since because of it.

And I know this because Bob Haney told me, and Bob Haney wouldn't lie. 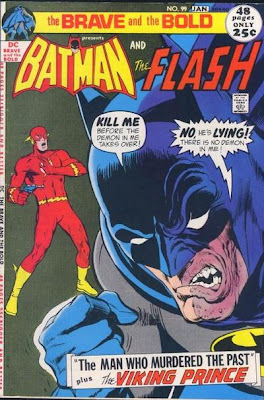 The story begins with a pretty bizarre premise. Batman has a strong desire to suddenly visit a New England island where he and his parents used to summer, so he drives right up from Gotham City..."Didn't even change the old Bat-suit!"

After a ferry ride there, he visits the cobweb-filled home, remembering fishing and playing tennis with his dad. As a storm brews outside, he pushes asid the portrait of his father, opens the safe hidden behind it and then finds...his parents' ashes?! 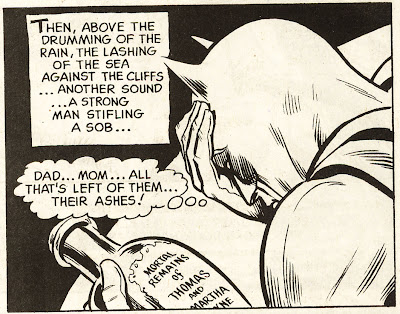 The Waynes were cremated? But then, who's buried in their coffins? And why are their ashes kept at their abandoned summer home, instead of at Wayne Manor?

The wind throws open the door, and when Batman goes to close it, something strange happens: "a shudder shakes his every inch, and with a strange stiff-legged gait...he suddenly lurches out into the storm!" He stomps and klumps his way to a little building, and says: 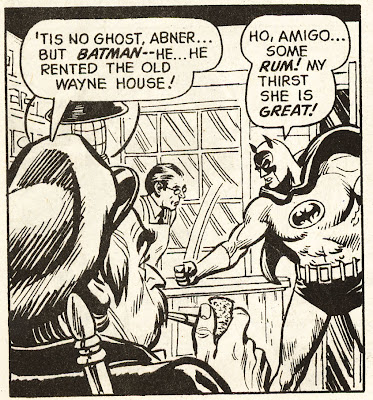 This being the Haney Batman, that's not even that weird a thing for Batman to say, but the men notice the accent and funny walk remind them of "Old Manuel the Port-a-gee," a pirate who died in a storm just like this one...50 years ago!

Batman snaps out of it, and the men ask if he was imitating Manuel as a joke. He responds with characteristic smoothness, "Ha! Ha! My friend, Bruce Wayne, told me about him!"

Deciding he must just be tired, Batman returns to the Wayne summer home and decides to get a good nights sleep, laying out his Batman costume right next to his bed. 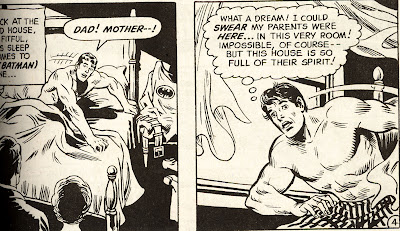 The next day, he puts his costume back on and wanders around the town in it, until he's suddenly seized by the spirit of Manuel again. He throws a harpoon through a sign, and then heads toward an abandoned light house, where he punches out a cop, and then comes to again.

He's taken to court, made to realize he should probably keep a few benjamins in his utility belt, and then bailed out by his fellow hero Barry Allen 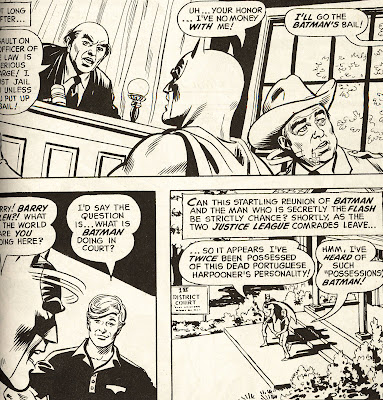 who's sporting some awfully goddam long hair for Barry Allen. You're not going counter culture on us, are you Barry?

As the two walk back towards the summer home, Batman explains his trouble with possessions, and Barry explains just what it is he's doing there: He was lab instruments began picking up "certain strange vibrartory signals...from another dimension...a world beyond our own!"

And they're originating from the island; specifically—The Wayne house!

Since their problems are originating from the same source, they agree to stay together to work them out.

That night, Batman dreams of his moustache-less father, and adopts the classic sleep-walking posture to follow the apparition into his father's secret lab: 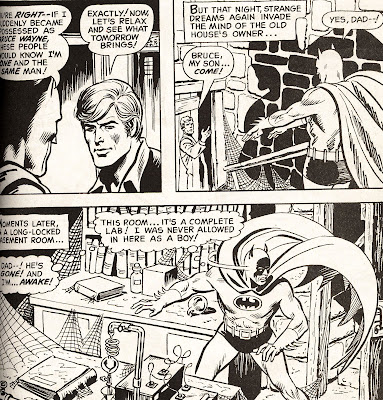 And what was his father working on? 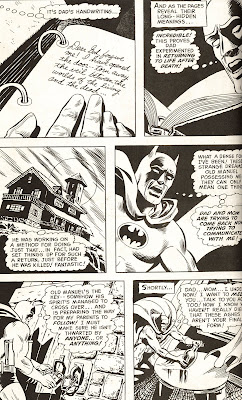 Why, a method for returning to life after death! It's now clear to Batman that his parents are trying to come back, and Manuel is somehow involved.

Over coffee the next morning, Barry's a little less convinced in the wisdome of Batman's plan: "Bruce, I understand your desire to... Ah...contact your dead parents-- but what if it should fail...or backfire somehow?"

Batman sudies the notebooks until he's convinced he's supposed to do something, as Manuel, in the lighthouse, and so he simply waits until he's possessed again. This time Manuel-in-Batman's-body makes it all the way to the top of the lighthouse, but is thwarted at super-speed by the Flash.

The next day, Barry is more forceful in arguing against Batman trying to bring his parents back to life: "I'm thinking of my friend, Bruce Wayne-- The Batman... 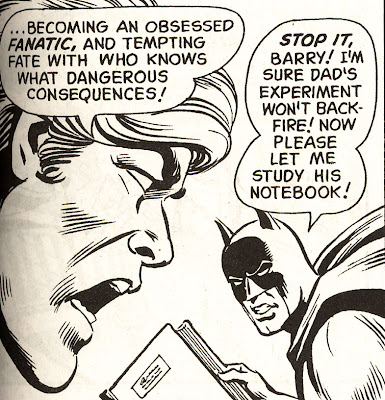 Wait, "becoming?" Like, just now? All of a sudden?

The Flash realizes something in the house is attracting the attention from the other world, and searches in vain for it. Ultimately, he picks up Batman and uses his vibratory powers to transport the pair to "another world." This other world is a dismal place, filled with fog and transparent figures everywhere. Atop a rock, a wooden-legged man speechifies to the other spirits about how the "sins we did in life have locked the door to the land of eternal rest--and we are trapped in this valley of limbo."

In other words, Manuel and the others are in purgatory. And among those others? Why, none other than The Waynes. 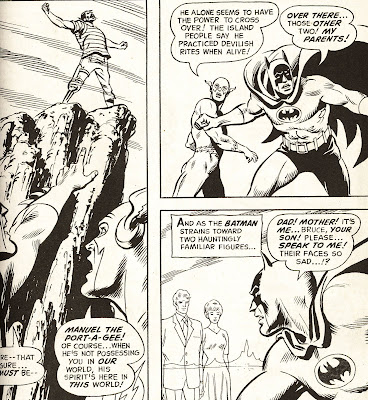 Manuel's plan is for them to invade the world of the living, and inhabit the bodies of the living, just as he has been inhabititing Batman's. Barry de-vibrates the two heroes back to the real world, and is sure this at least will discourage Batman, but no dice.

While Barry continues to investigate the beacon he assumes is somewhere within the house, Batman again succumbs to possession, and this time Manuel is able to repair the lighthouse, the beam of which allows the spirits of the other world to enter the world of the living. Somehow. 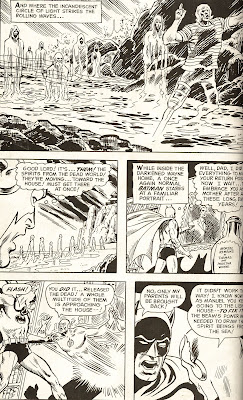 The spirits parade right up to the door and start knocking. Manuel and Batman struggle for control of his body; the former wants to open the door and let the dead in, the latter asks Flash to kill him before he can. Manuel-in-Batman brains The Flash with a candlestick, which apparently inspired him, as he suddenly realized Thomas Wayne hid the beacon in the one place he knew his son would never look—the urn full of their ashes! 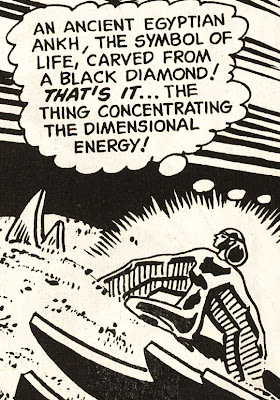 (In the days before Google Image, photoreference was harder to come by, which might explain why this ankh looks absolutely nothing like an ankh).

The Flash hurls the ankh into outerspace (super-speed, I guess?), thus severing the other world's connection to the house, and Manuel, The Waynes and the army of ghosts disappear.

Batman has finally realized the error of his ways, but is pretty bummed out about having come so close to being reunited with his parents, only to lose them again: 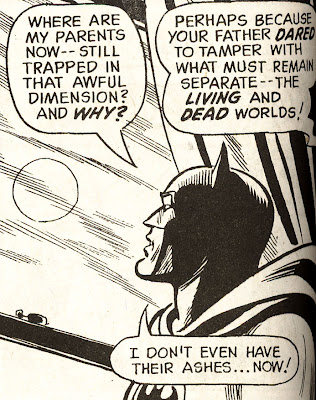 But don't worry, they're not doomed to languish in purgatory forever, as The Flash theorizes. For that very night, while Batman sleeps peacefully, we the readers are assured that everything worked out okay for The Waynes: 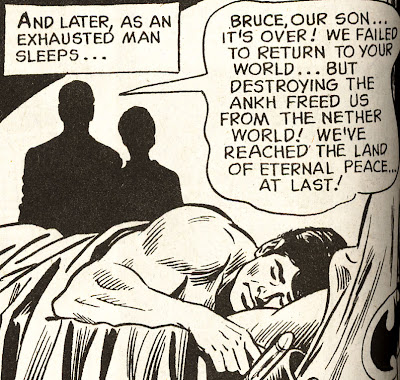 The next day, Batman has finally found the peace he's sought his whole life: 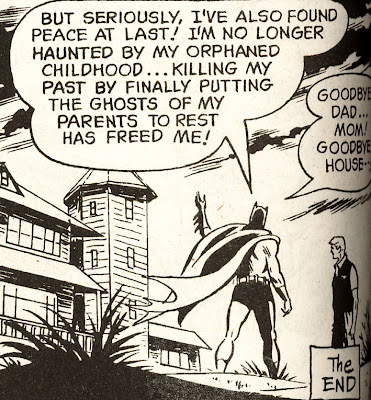 And he never obsessed over the death of his parents again.
Posted by Caleb at 3:53 PM

Well, that last note made me laugh out loud.

Is...is it wrong of me to find that to be absolutely hilarious? Poor Batman. I live to mock his pain.