One day, Willy, Tubby and Iggy are arguing over which of them Lulu likes the best, and Iggy's pretty sure it's him, for the following reason: 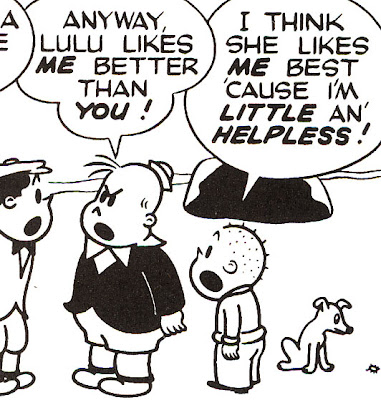 To put Lulu's affections to the test, the boy's do the most logical thing: They sit on a rock and wait for the tide to come in and trap them. You see, the only sea-worthy vessel nearby is a tub large enough to carry Lulu and one other kid, so obviously whoever she decides to rescue first is the one she likes the best.

While calling for help, Iggy reminds Lulu of his likeable attributes: 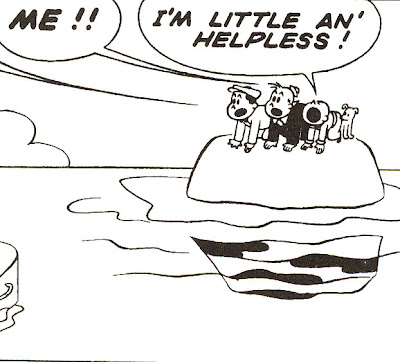 I don't know, Ig; I'm not that tall, and am relatively helpless, and the girls I've managed to trick into dating me over the years usually don't find my lack of height or helplessness to be among my better qualities.

But perhaps there is some merit to Iggy's theory, since Lulu ultimately rescues the little dog who was hanging out with the boys throughout this story simply to be there for the punchline: 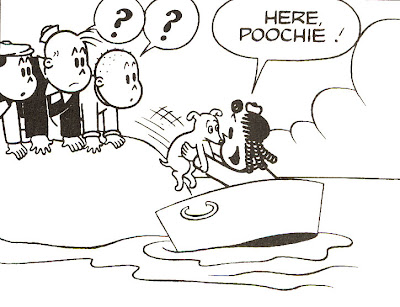 And that dog is even smaller and more helpless than Iggy.

So perhaps that's at least one girl who finds littleness and helplessness attractive. Or maybe she just dislikes boys; particularly ones who play pranks on her, like these three do earlier in the story.

This particular story can be found in Little Lulu Vol. 14: Queen Lulu, which also includes a beach story called "The Earwich" in which little shit Alvin buries a sleeping man in sand to tickle his feet, tickles the man's foot when he's dangling upside down from a lifeguard station, and then totally beaches—and thus presumably kills—a whale. I couldn't scan it without breaking the spine of my book but, damn, don't fuck with Alvin; the collateral damage alone is staggering.
Posted by Caleb at 2:30 PM