This Is Not A Graphic Novel: Monkey With a Tool Belt

Well my friends, that time has passed. I’m not sure when it was exactly that the monkey jumped the shark, but I’m quite certain that they are no longer the acme of humor.

Now it’s bears. Or possibly hobos. Maybe both, depending on the particular situation. But those words seem to pack the humorous punch that the word “monkey” used to, when dropped into sentences.

As fond as I am of saying things like “Bears are the new monkeys, and hobos are the new bears,” monkeys can still be rather amusing. Particularly when they’re wearing the right accessories. 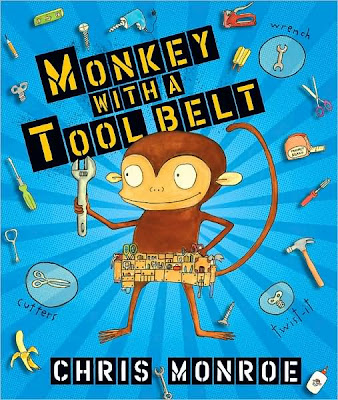 Chris Monroe’s picture book Monkey With a Tool Belt (Carolrohda Books) has a pretty brilliant idea at its center, one that it perfectly communicates in its simple, four-word title. That combination of words sure does fire the imagine; I crack a smile, grow a little excited, and even feel a little bit afraid when I contemplate a monkey with a tool belt.

“Chico is a monkey with a tool belt.” 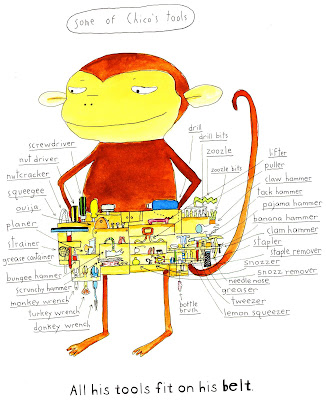 The early portion of the story lets us know a little bit about Chico. We see the tree house he lives in, learn some of the tools in his tool belt, and watch as he uses them to build and fix things for all of his little animal friends. We learn that he’s very creative, and that he occasionally makes mistakes, which he is happy to fix (Mistakes like building a seesaw upside down, so that the kids riding it bump their heads on the ground. Hee hee). 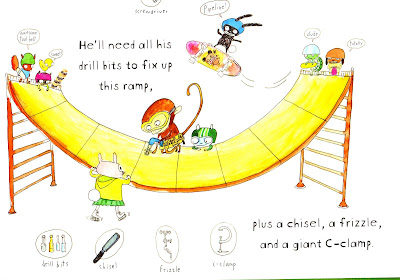 Monroe’s prose in this section slides into rhyme and it’s not exactly good rhyme—“He builds a dock for the ducks and a clock for the clucks” —but her art is fantastic.

Her thin line is precise, but somewhat imperfect, with a touch of late Schulz-like scratchiness to it—it connects where it needs to connect, and the shapes it forms are all perfect in proportion, but they all have a very organic feel to them. Put simply, her drawings look like drawings; you can almost see the path her pen took on the page.

The art seems to have been filled in with water colors, giving it a further warm, home-made feel; the work of a great artist sharing workspace and materials with some little kids.

Her pages are packed with details, making it a real joy to linger on. One scene in a sequence about what Chico has built features our protagonist working on a toy box for Neville, a tiny Godzilla-like guy in a pair of polka dot swim trunks, and they toys are all fun and play-able looking—I even recognize some from my own youth, particularly one of the limbless old-school Fisher-Price Little People toys.

Near the climax, there’s a beautiful two-page spread featuring a bicycle ride between two points. The start and finish are right next to each other on the page, but the road between the is a long, winding, corkscrew one, on which multiple images of the character on the bike are drawn at different points to show his progress, and the result is something between a map and a picture. This is one of the few scenes that fill up all of the available space (most of the others are smaller pictures or panels embedded in airy, empty space), and Monroe fills it with trees, animals and buildings. There’s a hot dog stand called Frank’s which is shaped like a giant hot dog, a burger joint called Patty’s shaped like a giant hamburger, a house that inexplicably looks like a Jack O’ Lantern, a bear with a honey pot sitting in the woods by the road while bees the size of his head buzz around and just wow, what a spread!

I think the title pretty much tells the only story worth telling, but Chico does have a little adventure within these pages. One day he’s chilling in a lawn chair in his front yard, when he notices a banana split on a tiny table across the street. When Chico goes to investigate, he’s captured by an organ grinder, who puts him in a wooden box.

The organ grinder has lost his previous monkey, Bobo, as is described in this sequence of events: 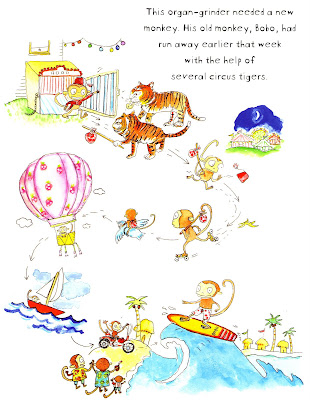 Bindles, being he province of hobos are, of course, inherently hilarious, since, as we’ve previously discussed, hobos are the new bears, and bears are the new monkeys.

And a monkey with a bindle staff? That’s pretty amusing. But a tiger holding a bindle staff, even if only to hand it to a monkey? That is fucking genius.*

The organ grinder takes Chico into his well-appointed trailer, and then proceeds to make his dinner, leaving the trapped monkey to devise his escape. This occurs in a wonderful two-page, 12-panel sequence in which Chico uses his various tools in a rather complex plan involving a tape measure, sand paper, math, a “utility-knife-lemon-squeezer-flashlight-banana-peeler,” a kazoo and a “bendy extender.”

The last step is surprisingly simple though: 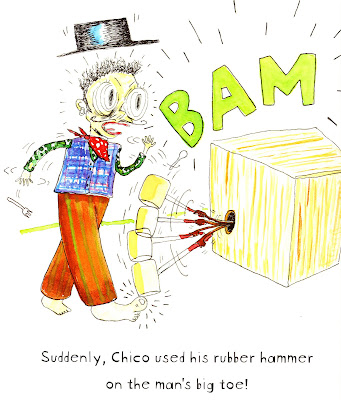 While the organ grinder is hopping about in pain, Chico jumps out of the box—the screws of which he had already loosened—runs outside and takes the bus home.

Actually, Monroe draws a bunch of those dreams. Here’s one: 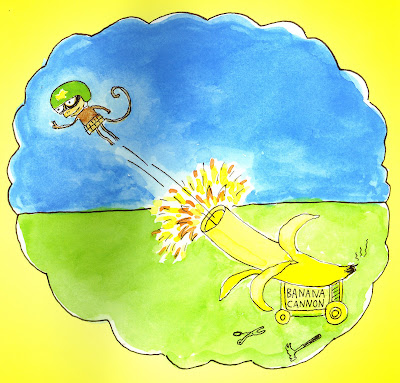 *Sorry. I probably shouldn’t use the F-word when discussing children’s books, but I really needed to emphasize the degree to which a tiger with a bindle is genius. If Monroe and/or Carolrhoda Books want to blurb me on the back of a sequel book, perhaps this will be more age-appropriate: “Move over Curious George! There’s a new monkey king of kids books…and he has a tool belt!”
Posted by Caleb at 5:38 PM

I like the first review quote better. It's never too early to teach kids how to curse.