The most mind-blowing moment in Showcase Presents: The Brave and The Bold Vol. 2

I know it seems odd to say this about a book containing almost 500 pages worth of Batman comics written by Bob Haney, including stories in which Batman and Sgt. Rock fight the devil or Batman gets possessed by a pirate and tries to bring his mad scientist father back from the dead—but the scene that blew my mind harder than any other was this one: 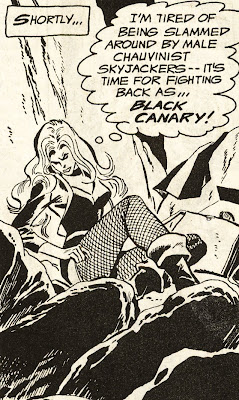 It's drawn by Jim Aparo and it's from 1973 story "The 3-Million Dollar Sky" in Brave and the Bold #107. It should have been the sexiest issue of Brave and the Bold ever, as it does include Black Canary going undercover as a stewardess to fight skyjackers and this scene of her changing into her battle-lingerie, but please, join me and looking closely at Black Canary's legs, particularly the upper-thigh/hip area.

Note that the's apparently pulling her right fishnet stocking up over her bare leg, and that she's already wearing her black one-piece bathing suit costume thing.

Does this mean that Black Canary puts that on first, and then puts on her fishnets? Is that even possible? Look, I know I'm not the Internet's leading authority on ladies wear, but my whole life I always assumed that Canary had to put her tights on first, and then get into her body suit. I assumed they'd have to be a single pair of tights—the kind that look like stretchy little pants—instead of two individual stockings. But if they are individual stockings, as this image seems to indicate, does that mean she just kind of tucks them up into her bathing suit-looking thing? Or are there, like, snaps on the top of her tights that keep them in place? Maybe some kind of tiny little garter-like system, invisible to the human eye from this distance?

It just doesn't make any sense!!!

Of course, it could just be that Aparo drew the panel however he wanted without stopping to think too hard about how ladies would wear fishnet stockings with their superhero costumes.

Like how Green Arrow probably doesn't really wear his quiver full of arrows under his two suit coats when he's in his Oliver Queen secret identity despite what Dick Dillin might have drawn in JLoA #163...
Posted by Caleb at 1:08 PM

You might be over-thinking this just a wee bit... though showing a pic of Canary putting on her stockings totally makes the post worth it.

I hadn't seen that scan of Ollie changing. I had kind of wondered why he sometimes wore his costume around under his regular clothes, and where he kept his longbow.

And I'm reminded of Animal Man having to go back to his car to get his costume, because "Haven't you ever heard of hygiene?"

Speaking as a woman who has had to put ON hose what she is doing, is simply impossible. I can only assume that the artist did not think this through. On the other hand, I imagine that most of the guys looking at this book would not object.

Did Ollie put his gloves on before he took off his jacket?

I don't think they can show Black Canary putting on her stockings -- without having anything else on.