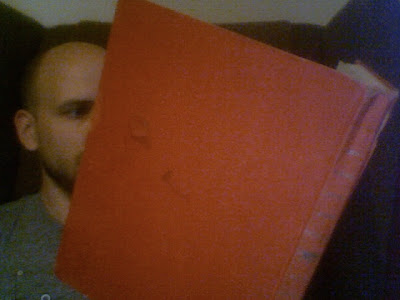 The other day I was perusing some of the old books being discarded from one of my local libraries. Just as libraries are always getting new books in, they’re also getting rid of old ones, to make room on the shelves: The ones that never go out, or contain out-dated information, or are available in newer prints, or are completely falling apart with age or over-use. Usually then end up in book sales sponsored by friends of the library-type volunteer groups, a sort of win-win for everybody. The library gets some money out of books they needed to get rid of anyway, and customers get old books at a super-cheap price.

At one such sale, I found a large, red, extremely battered book. It was about nine inches wide and 12 inches high, and had some sort of stain or discoloration on the blank red cover. It was the spine that caught my eye though, as there was a silhouette of a caped strong man on it. Flipping through, I saw a lot of prose strewn across the opening pages, and then about 130 pages full of full-color reprints of Golden Age superhero stories. Superman! Batman! Wonder Woman! Plastic Man! Captain America! The Human Torch! Golden Age Green Lantern and Flash! The Spirit! And still more!

It was like a sampler platter of the best of the Golden Age superheroes; the DC stories looked like ones I’d read in library-borrowed DC Archive hardcovers (all of which I’d like to own, and none of which I can afford—expand your Chorincles trade program, guys!), but I’ve never really read precious few Captain America, Namor and Human Torch stories.

And it only cost $1, on account of how beat-to-hell it was.

It wasn’t until I got home—there were other comics-related books to sift through—that I realized exactly what this big red book was.

This was The Great Comic Book Heroes (Bonanza Books; 1965) by Jules Feiffer, a classic and oft-quoted essay by Feiffer that describes his own relationship with comics (he was one of the few that was there at the beginning, and is still working in some aspect of cartooning) and his childhood attraction to the various heroes.

It was one of the earlier works of comics literary criticism, and everyone who saw the second Kill Bill has heard at least part of it (David Carradine’s speech to Uma Thurman about the true nature of Superman is in here).

Fantagraphics has since brought the book back, with a fantastic cover image, but the Fanta edition just contains Feiffer’s prose, whereas this old volume featured stories starring many of the characters he discussed (The only one missing a story is Sheena The Jungle Queen, and poor Captain Marvel was only allowed one-page, due to his legal status at the time).

As I was reading Feiffer’s fantastic essay, every few pages I would hit a paragraph featuring a wonderfully insightful observation, one that was framed in a colorful, witty way; one that I was somewhat surprised to find was still relevant.

It’s not simply that Captain America and Batman are still starring in comic books today, or that the comics blogosphere likes to joke about how gay Robin is or what exactly was up with Wonder Woman and the ropes.

I think it’s a mixture of the ascendancy of the superhero in American culture as a whole at the moment, and the increased interest in comics (fueled in large part by the mainstream publishing industry’s embrace of the graphic novel format) leading to ever increasing discussions of these subjects. Who are these heroes, where did they come from, what do they mean, how were they created—these topics are more talked about now than at any time in my life.

Feiffer talks a lot about Dr. Wertham, for example, a man who's work against and worries about comics have recently been discussed at great frequency online, in print and, hell, even on The Colbert Report, thanks to David Hajdu’s recent and well-publicized book The Ten-Cent Plague.

I kept noticing points of Feiffer’s and thinking, “Hm, that would make a good blog post.” By the time I’d thought that a half-dozen times, I figured I might as well go ahead and do a theme week of posts.

Given all that, this isn’t going to be Jules Feiffer Week because I’d need a lot more than a week to discuss Feiffer, even if I were to just focus on his comics/cartoon/sequential art work.

So instead, this week is simply going to be Jules Feiffer’s Superheroes Week. Every day for the next seven days, I’ll post a quote from his essay about some of the superheroes and subjects we’re still talking about today, plus some image-heavy looks at some early adventures of the Golden Age’s greatest bare-chested heroes (which were included in the 1965 version). This will be in addition, rather than a replacement of, our regular features, like Wednesday night’s Weekly Haul, and the monthly looks at DC and Marvel’s preview reviews.

In the mean time, I’d highly encourage everyone to check out fellow “Best Shots” shooter and frequent EDILW poster Michael C. Lorah’s excellent and wide-ranging interview with Feiffer for Newsarama. You can read it here.
Posted by Caleb at 6:49 PM

Thanks for the link! That interview is easily my favorite thing I've ever done for Newsarama.

I'd love to track down an original hardcover copy of GREAT COMIC BOOK HEROES. I have the new Fantagraphics edition, and the awesomeness of the essay is intact, but I imagine that he picked some great comics to illustrate his points.

I just picked up EXPLAINERS, the new hc collection of the first decade of his FEIFFER strip in the Village Voice (I'll read it in a few weeks; I'm in vol. 4 of a four-volumes-in-succession reading of the Kirby Fourth World Omnibuses now, and there's a few other things I'd like to catch up on).

And last night (before reading this post, but after reading your announcement of Feiffer-theme week), I went into my Netflix queue and moved CARNAL KNOWLEDGE (for which Feiffer wrote the screenplay) up to #2.

Although the movie was #3 before I moved it, so it wasn't much of a change. It just means THE FOG OF WAR has to wait a few extra days.
(The Chris/Rich Robinson concert video BROTHERS OF A FEATHER is #1 at the moment. Because I know the curiosity is killing you.)