The Other Secret Invasion: Millennium #3 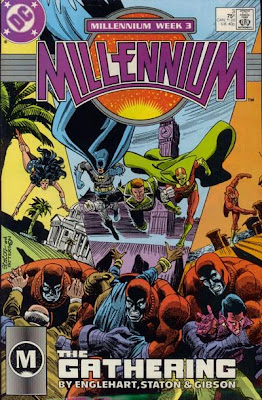 “Somewhere, out there--maybe in the dark recesses on the far side of the world, where even the natives fear to tread--

“--The cult of the Manhunter congreages, like flies on rank meet!”

I’m fairly certain they are not meeting in the building across the street from me, because it’s just a one-story house, and there’s no way a few hundred androids would fit in there. And even if you could squeeze so many androids into that place, there would be no room left over for their six-story-high lion sculpture, their dais with the long flight of stairs, or the giant pots of fire.

This opening scene is a little like one you’d expect Indiana Jones to sneak into, if instead of androids there were half-naked minorities chanting. But they are androids, and they are chanting.

Then, their chant-leader, the ridiculously mustachioed Grandmaster (now revealed to have four other Grandmasers-in-waiting, with smaller moustaches, acting as his hype men), brings his followers up to speed on the previous two issues and their tie-ins.

Specifically, The Immortals (Little blue Green Lantern boss Herupa Hando Hu and Zamoran Nadia) have chosen ten mena and women “to speed earth toward its future,” and one of them has been killed: Salima Baranizar. A mob seemingly got her, but the Grandmaster seems to indicate it was their doing. The heroes, who were told to butt out or suffer, have rejected “subversion, as expected!”

Meanwhile, a woman named Tawny Young is watching a newscast and talking out loud to herself. Apparently, she’s in the field of television journalism and not, in fact, a stripper, despite what her name may indicate.

A balding, beady-eyed man she calls Mr. Nidederman approaches her and tells her he’ll give her a raise and a spot in front of the cameras, as long as she promises to “cloud an issue” for the people he represents. The issue? “Anything having to do with aliens asking people to create the future! Anything mentioning the word-- Manhunter!”

Then, in Soviet Russia, contactee Nikolai is being harshly interrogated by the KGB. You may recall Nikolai refusing to go with the Immortals, thinking it a test of his party loyalty. He’s rewarded by getting shot in the face by agents of his own government. It just goes to show you:Communism sucks. Go America! U.S.A.! U.S.A.! U.S.A.!

And where are these immortals while their chosen are being killed off? Hanging out with the Green Lanterns, who are escorting contactee Tom Kalmaku and his family to the Green Lantern Citadel for safe-keeping.

Hearing that two of his fellows were already dead and that the immortals assumed some would get killed off, Tom’s feeling less than good about his calling:

Then, John Stewart floats the TV outside so the rest can see the president’s address: 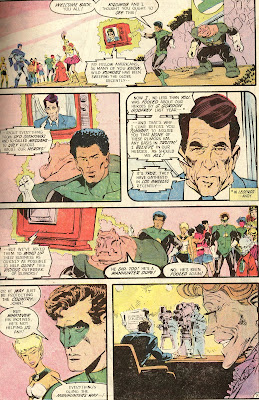 Holy shit! Is Nancy Reagan is a Manhunter?! That…that explains a lot about the Reagan administration, actually.

Other groups of heroes busy themselves gathering up the contactees before they can be killed. The Outsiders rescue Takeo Yakata from Manhunters, and Infinity Inc. scoop up Betty Clawman and take off before any Manhunters show up.

The Justice League is in Washington D.C., talking to a crowd of people. 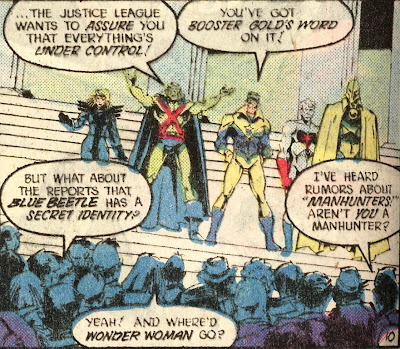 I agree with that one guy; why should he trust someone calling himself The Martian Manhunter when it comes to news about Manhunters?

In the next panel, someone asks about UFOs, and J’onn J’onnz says there are no UFOs. Again, I wouldn’t necessarily put a lot of stock in a Martian denying the existence of UFOs, but the crowd decides to take the League’s word for it, mostly out of guilt, as it was just last year they were demonstrating against costumed vigilantes in Civil War--er, Legends.

Other Leaguers head to the U.K. to find Celia Windward, who addresses the heroes as “De Batman…de spookiest one’a all” and “Mistah Miracle mon.”

When last we saw Windward, she had no interest in the Immortals’ offer…what changed? 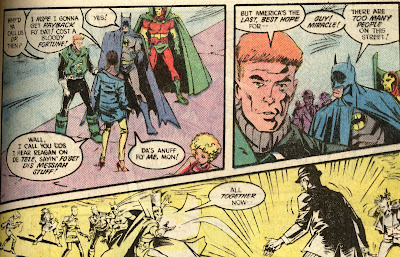 Ah, if Reagan says something, do the opposite. Makes sense.

Speaking of late-eighties politics, Wonder Woman heads to Pretoria, South Africa, and ruminates on the evils of apartheid, before meeting with contactee Minister Kroeff. 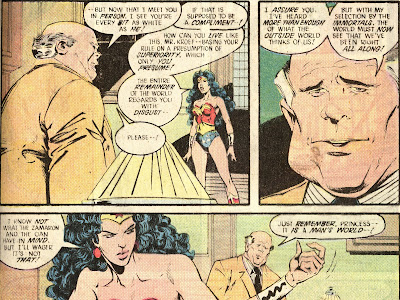 On the Peruvian docks, Gregorio is being Yoo hoo-ed by a burly dock worker, and decides to do himself in by jumping a rather short distance into the water. Luckily, The Flash intervenes, saving the series’ most interesting character: 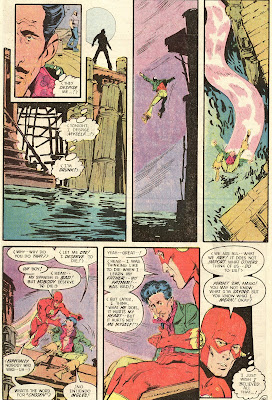 The Green Lanterns go to China, and collect Xiang Po, before an actor who is either a Manhunter or malcontent can do her in.

And on the Manhunter homeworld, one-time Monitor factotum Harbinger is looking to atone for a mistake that helped endanger all the heroes of earth during this Manhunter invasion. See, she recorded the whole history of the post-Crisis DCU (heroes’ secret identities and all) on a globe and shot it into space, where the Manhunters found it and used it to do stuff like put the screws to Superman and Batman in the last issue.

She attacks the planet using her spectacular ability to split into 20 forms…allowing upskirt shots from multiple angles on the same page. 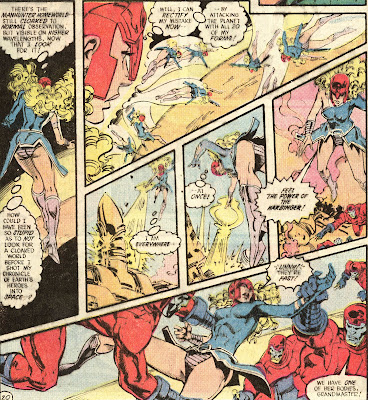 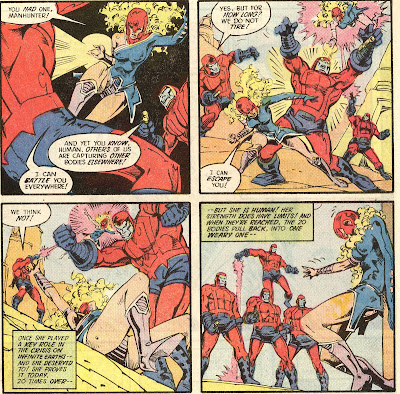 She fights valiantly, but she’s only human, and the androids and soon she learns that no man—or woman—escapes the Manhunters (or Womanhunters).

And after six of the contactees who haven’t been killed yet are safely gathered in the Green Lantern Citadel (i.e. Hal Jordan’s condo), Jordan notices something is amiss. I mean, a-missing.

Tom and his family aren’t there!

Did the Manhunters get them? Did they wise up and get the hell out of there before they got killed by a mob or shot in the face by the KGB?

If it were 1988, you could find out next week. But since its 2008 and I’m going through these issues each week an issue of Secret Invasion is released, you’ll have to wait till next month!

"But what about the reports that Blue Beetle has a secret identiy?"

Uhhh...wasn't that kind of implied by the mask, upset crowd?? In fact, doesn't everyone up on those steps have a secret identity?? So why the concern about Blue Beetle??

The "wisdom of crowds" does not include comic book mobs, apparently.

And yet, after 3 issues, Millenium is still better than Secret Invasion.

Man, I have GOT to get this when it comes out in trade. Everyone keeps telling me how terrible it is, but look! Guy Gardner is right there on the cover! Woohoo!

I remember Tawny Young. She had a crush on John Stewart and took it rather badly when he ran off with Katma Tui instead.

Nancy Reagan being a Manhunter DOES explain rather a lot. I DO like Gregorio though, although some of his fashion decisions are a bit suspect.

Unrelated questions:
Where is Harbinger now?
What happened to Donna Troy being the new harbinger/keeper of the multiverse or whatever she was?

Patrick - That was probably completely forgotten, because continuity is broken.

If I read it correctly, she had plotted a course for her space-faring info-ball that would have avoided all inhabited areas of the universe, but the Manhunter Homeworld was cloaked, so she sent it right to them. But yeah, not a very good plan.


Where is Harbinger now?
What happened to Donna Troy being the new harbinger/keeper of the multiverse or whatever she was?

I think she died not long before Infinite Crisis. She was living with the Amazons, and I want to say she was killed during the Doomsday invasion during Loeb's run on Superman/Batman, but my memory's foggy.

I don't think they mentioned Donna-as-the-new-Harbinger since the 52 back-ups, but that woulda made her role in Countdown seem logical, if it was referenced at all.

Dan, that would be an excellent idea. It would be even better if Gail Simone wrote it.

SallyP: You read my mind! Or Keith Champagne.

One of the many things to dislike about Millennium is that it took a perfectly nice framing device for "History of the DC Universe" and made it a plot point.

Another is that, frankly, universe-spanning Guardian-built robots with the tech to cloak a whole planet and the infiltration capacity demonstrated in Millennium wouldn't really need Harbinger's little storybook to know the secret IDs of [at least most of] earth's heroes. Batman can be sure no car is following him through the illusory wall into the Batcave; he can't constantly check whether immortal robots with giant telescopes are following the Batmobile from a platform miles in the sky.