Review: Jamilti and Other Stories 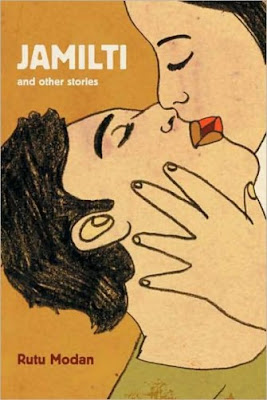 Like many of the people who find themselves using the term “graphic novel” on a daily basis, I’m not entirely comfortable with it, in large part because it’s a term that doesn’t really mean anything, or, rather, means too much. A sort of blanket term for anything with panels, it’s what publishers and libraries use to refer to what I called “comics” as a kid: Original graphic novels, collections of comic books published serially by one creative team, anthologies of comic books published serially by many creators over the span of decades, collections of comic strips, prose/comics hybrids, whatever.

Israeli-born cartoonists Rutu Modan’s Exit Wounds (Drawn & Quarterly; 2007) was a graphic novel in the real, true definition of the term. It was the comics equivalent of a prose novel; it was a rather long work of fiction that featured a somewhat complex plot driven by the actions of its protagonists, and it was conceived, created, published and meant to be read as a single experience.

Mondan’s latest work, published this fall, is not a graphic novel, at least, not in that sense of the word. Jamilti and Other Stories (Drawn & Quarterly) is a graphic short story collection.

And that’s exactly how it reads. Like Exit Wounds, Jamilti has the tone and resonance of a work of literature, only here it is several, shorter works of literature.

It seems strange, even dangerous to use the word literature like this, as if to distinguish it from entertainment when talking comics, which then seems to imply Exit Wounds and Jamilti aren’t entertaining because they’re literature, or a comic created chiefly to entertain its readers doesn’t count as literature but, well, here we are: Talking about comics, just like talking about books, gets awfully tricky sometimes, particularly when you start the damn review by talking about he words you’ll be using while doing the talking.

But that was my experience of reading Jamilti—it was like reading a collection of short stories from a respected novelist.

While this is Modan’s next book published chronologically, the work within mostly predates Exit Wounds. The seven short stories were created between 1998 and 2007, and were all previously published by either Actus Independent Comics or, in the case of the title story, Drawn + Quarterly Volume 5. So while this is technically a follow-up, it doesn’t show where Modan’s going so much as where she’s been (In fact, the final story, “Your Number One Fan,” is the only one that looks and reads all that much like Exit Wounds).

Modan’s art style varies from story to story in ways minor—one is white, most are in color; one is printed horizontally on the pages, the others vertically; one story makes each page its own panel, while the others are broken into more traditional grids; et cetera—and major, with some quite loosely drawn with more abstracted character designs. It’s all recognizably the work of the same author however, with Modan’s collapsed field of vision and flattened space ever present, and the highly illustrative artwork the exact forms of the bodies can be somewhat amorphous.

There’s a great deal of variety in the tone of voice that tells the stories as well, although the subject matter is rather consistent, dealing as it does with families or family-like units contending with missing pieces and contemplating how to move forward, or if to move forward.

Perhaps the most whimsical of them is “The King of Lillies,” in which a plastic surgeon tries to transform all of his patients into the likeness of the young woman he loved and lost, although there’s a streak of silliness in “The Panty Killer,” about a serial killer with an unusual M.O. Several deal with the violence and nearness of two enemy peoples that was part of Exit Wounds; in the short, punchy affecting title story, a nurse helps the “victim” of a bombing and is rewarded with extremely conflicted feelings, and “Homecoming” manages to be somewhat comical in the way it treats the expectations of a family hoping against hope that a MIA soldier son will someday, somehow return to them.

Each of the seven stories is strong on its own, so naturally enough they all add up to a pretty great book, made greater than the sum of the parts by the way they comment on and reflect one another.

RELATED: Check out a preview of the title story here.

And here’s an interview of Modan my fellow Blog@Newsarama contributor Michael C. Lorah conducted back in August.
Posted by Caleb at 7:34 PM