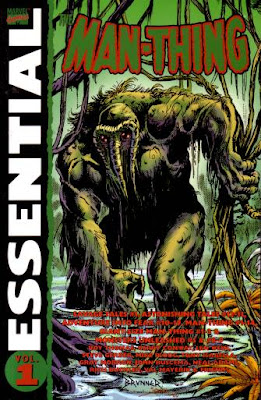 1.) The way Man-Thing fights alligators. I flirted with doing a whole post about this subject, complete with a bunch of scans, but maybe I’ll just mention it here. There’s certainly something exciting about seeing a monster fight alligators, but the way Man-Thing fights them just fascinates me. Being a brainless, personality-less creature unable to speak or do much of anything beyond shamble around, empathize with the emotions of others, fight things and burn whatever he touches that knows fear, fighting alligators is a wholly meaningless activity to Man-Thing. He’s so blasé about it. He fights alligators the way I make my bed or wash dishes or brush my teeth: It’s just one routine part of his day.


2.) The copious amounts of well-drawn cheesecake. I know I make fun of DC and Marvel for their exploitative imagery of women fairly often, but that’s not because I think there’s anything wrong with drawings of sexy, scantily clad women, it’s because when DC and Marvel do it it’s a) often highly inappropriate (involving minors, sexual violence, brutality, or children’s characters), b) extremely poorly drawn , c) meaningless to the story and in some cases actively distracting from the story being told (see Benes’ JLoA run for a few hundred pretty good examples), d) really, really gross (sexualizing zombies and mortally wounded aliens, couching the scene in terrible violence, etc). or e) some combination of a-d. There’s plenty of cheesecake throughout this book, from Gray Morrow’s femme fatale Ellen’s flimsy negligee (which she wears in a shack…in a swamp) and the shredding her outfit goes through when she runs afoul of Swamp Thing, to the lurid covers of the issues of Monsters Unleashed included. 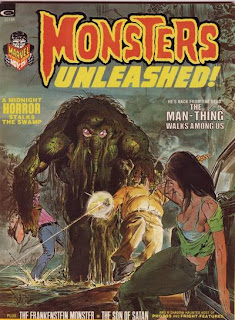 (I guess her top got caught on the steering wheel during the car accident...?)

But Morrow and the other artists can draw realistic looking women quite well, it’s not like Man-Thing was being published alongside Marvel’s Swamp Monster Babies at the time, and the stories are almost all melodramatic soap opera horror stories about a tragic swamp monster set in a Florida swamp—scantily clad women don’t seem all that out of place, or threaten the integrity of the stories, as the whole endeavor is already intended to be lurid and exploitative.

3) The protagonists for a large chunk of these stories are essentially Satanists. For about a dozen comics in this collection, from Fear #11 through Man-Thing #2 or so, the sympathetic humans consist of teenager Jennifer Kale, her little brother Andy, and her grandfather, who looks a little like Stan Lee and runs a cult. The young Kales steal his magic book and summon a demon, setting off a chain of events that endangers all reality, and yet they’re all pretty sympathetic; Steve Gerber never really writes any “Stay in school and say your prayers, kids!” moral. It’s just the story of some kids who visit head shops and draw pentagrams to summon demons in the swamp for fun, and the cloak-wearing adults who practice forbidden magic on the weekends. I bet parents in the '70s loved it when the kids brought copies of Man-Thing comics into the house.


4.) Ka-Zar shows up for some reason. Man, talk about whiplash. This volume goes from the first Man-Thing story, by Gerry Conway, Roy Thomas and Gray Morrow, to a two-parter from Astonishing Tales written by Thomas and Len Wein and drawn by John Buscema featuring Manny and Ka-Zar vs. AIM, and then snaps back to a Conway story illustrated by Morrow and Howard Chaykin. I haven’t read many old Ka-Zar stories, but here he’s written rather Namor-like, only he’s from a jungle instead of from underwater, and he rolls around with his “brother,” a saber-toothed tiger named Zabu.


5.) Steve Gerber will write whatever the hell Steve Gerber wants to write. For the most part, the narrative of this volume is essentially on on-going, episodic swamp opera, with Man-Thing coming to the aid of various counterculture types (hippies, devil-worshipers, bikers, Native Americans, environmentalists) from mad scientists, industrialists, worse devil-worshipers and bikers, and the ever-present threat of alligator consumption. But there’s no genre he won’t tackle, and make work in the context of the book. Man-Thing repeatedly finds himself transported to sword and sorcery worlds, is later cast into a weird psychodrama involving the ghost of a circus clown and otherworldly judges who decide what form of eternity human souls must spend, he fights a traditional superhero and a traditional supervillain in different stories, and, toward the end of the book, he’s shanghaied by ghost pirates.


6.) Rory Regan. I love that guy. For some reason (Gerber?), I keep finding him in all of my favorite Essential books.


7.) My favorite sentence of dialogue ever. There’s this one scene where a recurring wizard character from the sword and sorcery fantasy land shows up, and lays his hand on the stunned Jennifer Kale’s shoulder. She spins around and says, “Who--? YOU?!” and he responds, “Aye--I!” I love that line.

The wizard also refers to Man-Thing as "The Man-Object" all the time.


8.) Mike Ploog. Artist Mike Ploog provides the bulk of the art in this volume, followed closely by Val Mayerik. Both are great—in fact, I don’t think there’s any bum art in the whole thing, thanks to Buscema, Morrow, Rich Buckler, Pat Broderick and Alerdo Alcala—but Ploog’s exaggerated, slightly cartoon-y art is tops. And, as I’m sure has been repeatedly pointed out, his name is just so perfect for stories involving swamp monsters.


9.) Daredevil and Black Widow’s guest-appearance. The back of the book boasts, “Guest-starring the Fantastic Four! Ka-Zar! Daredevil!” While technically true, DD and Black Widow appear for exactly two panels, literally just swinging through—in one dimensional portal and out another.


10). The complete randomness of the themes and subject matter. It’s not just that Gerber would find a way to put Man-Thing in different genre settings if it struck his fancy (or if some Marvel editor was like, “Ghost pirates are big this summer! Do a ghost pirate story!”, I guess), but the individual stories would be about almost anything. One issue it’s the environment, then it’s mental illness, then it’s a Superman parody, then it’s an elderly couple’s marital problems, then it’s a critique of religious zealotry, then it’s back to the environment, and hey, how about a moral passion play centered on bus crash in the swamp? There’s a real sense of an issue-of-the-week nature that creeps into these stories, at least between the longer story arcs involving the Nexus of Reality, similar to the vibe I get from those old Denny O’Neil Green Lantern/Green Arrow comics. Of course, I love those. Judged by today’s standards, I suppose a lot of these stories might not hold up on their own—they certainly seem pathetically juvenile when compared to what Alan Moore would do with DC’s muck-murker within a decade—but I find these stories utterly charming and, like a lot of Gerber’s work for Marvel during the period, a bit ahead of their time in terms of aspiration, if not always execution.
Posted by Caleb at 4:25 PM

The list of 10 top things you liked about Man-Thing and you didn't even mention Howard the Duck? Or maybe that goes under the point about Gerber writing about whatever Gerber wants to. I really miss that guy.

I am the man I am today in part because of the themes Gerber wrote about and the way he wrote them. His books demanded my attention and assumed my intelligence. I may not have cared for his later work as much but I always gave it a chance based on how great he helped make my childhood.

Thanks for this post, I may have to check out this collection now. I've only discovered your blog recently but this kind of post makes me glad I did. Thank you very much.