This weekend I steeled myself, took a deep breath and then forced myself to open an old suitcase in which I store notes, stories, drawings and (shudder!) poetry from when I was in college and high school. It...it's not a pretty sight in that suitcase.

Anyway, near the top I found a two-page comic strip I had apparently liked enough to rip out of the magazine it was printed in, fold in half, and stuff into the back of an old notebook.

It's a strip by one-time Cleveland cartoonist Brian Michael Bendis, who has since gone on to bigger and better-paying things. (Perhaps you've heard of him?).

This example is from 1998, and ran in a short-lived magazine-format Cleveland Plain Dealerinsert called Lake Effects. I think I may have an issue or two of it in the basement, somewhere. It was basically the PD's attempt to get at ad revenue that at the time was going to Cleveland's two altweekly papers; a weekly pull-out that had the size, shape and cover of a magazine, printed on something between newsprint and glossy magazine paper, and full of feature stories, local music coverage and content more likely to appeal to younger readers.

At the time, Bendis was working for the Plain Dealer, and his cartoons appeared in various places in their publications. I have a hard time recalling specific ones now, but I believe most of them were shorter, only taking up one page. 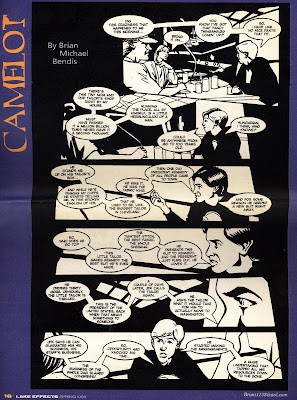 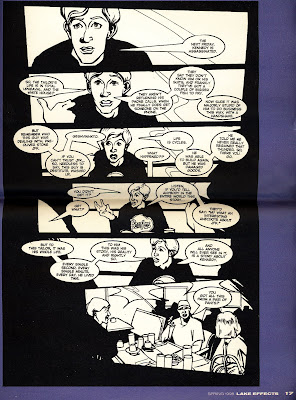 Don't mind the crappy scanning; the original has been folded up in a notebook for a decade.
Posted by Caleb at 6:26 PM

Thanks for sharing that! Was fun to read.

That was actually really good(and about the only non-Marvel Bendis I've ever read).

He actually used this scene (not the actual scan, but the script) to much greater effect in his crime book 'Goldfish'

I'm not really a fan of his work now, but his Goldfish, Jinx and Torso Trilogy is really worth the read.

He might have also reprinted it in Total Sell Out, his collection of this sort of work. It's funny how his dialogue style has exactly the same rhythm ten years later.

"It's funny how his dialogue style has exactly the same rhythm ten years later."

I think this is an example of a story that would work better in prose than as a comic book.

I think this proves that JFK was a Skrull.