This is not a graphic novel: James Kochalka's Squirrelly Gray

Well, I’m still waiting on the copy of Johnny Boo: The Best Little Ghost in the World I reserved from the Columbus public library (Hurry up and read faster, little kids; don’t you know grown men are waiting on you?!), but I’ve read, re-read and re-re-read Kochalka’s 2007 book Squirrelly Gray, so let’s start with that. 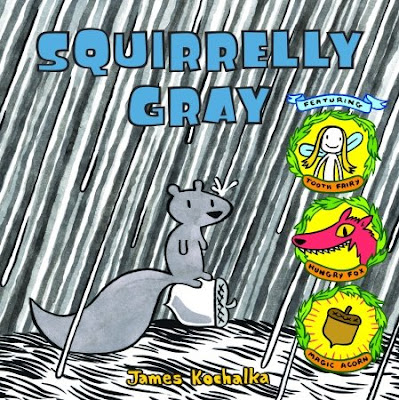 As you can clearly judge by the cover, Squirrelly Gray (Random House) is a rather adorable book. Of course, it’s a Kochalka book, and everything he draws is pretty cute, even when it’s just a bunch of super-powered teenagers trying to get high, or Kochalka himself arguing with his wife. This is a kids book, so it’s likely going to be even cuter.

The cover introduces us to some of the major players: S.G. himself, the Tooth Fairy, a Hungry Fox (with adorable overbite, saw-like teeth, and giant cat eyes) and a Magic Acorn. Awesome.

Now, there are some problems with the book, despite the predictable super-cute Kochalka art, and the familiar, comfortable Kochalka lettering.

This isn’t quite a graphic novel/sequential art/comics, but it’s not quite a picture book either; it’s one of those weird hybrids. On the left hand side of each two-page spread, there’s a page of pure text, and on the right there’s either a full-page illustration or, more often, a grid of panels, telling a scene of the story in comics form. 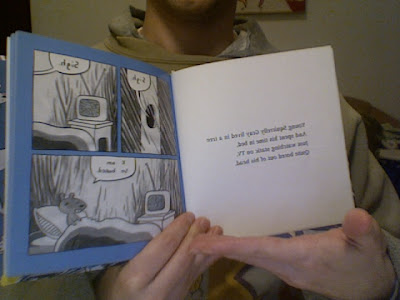 The problem is, the comics almost always repeat what has just been described in the words, so that there’s a strange and shifting overlap in narrative; sometimes the comics portion repeats it exactly, sometimes it repeats it differently, sometimes it contains new information alluded to in the text portions but not communicated in them outright. (It occurs to me that maybe this is merely a symptom of this being a book for little kids who are being read to; they can maybe make their way through the comics sections on their own, while their parent or reader tackles the blocks of texts on the left).

The other problem is that the text is all told in rhyme and it’s usually pretty lame. Again, little ones might not be as sensitive to shitty poetry as adults are, but I found myself wincing and groaning my way through passages like “Squirrelly gray, he bravely tried/ His very squirrelly best./ He Freed the little fairy while/ His heart thumped in his chest.”

These storytelling choices of Kochalka’s aside though, the story itself is pretty good. It’s a kind of animal fable about how color came into the world.

Once everything was gray, and out protagonist was a cute little squirrel who “spent his time in bed,/ Just watching static on TV,/ Quite bored out of his head.” 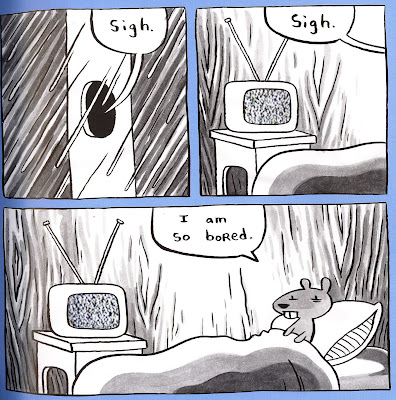 (I think Squirrelly Gray was suffering from depression, actually).

He takes to wiggling his teeth and, eventually, he wiggles them so much that they pop right out of his head. So he puts them under his pillow for the tooth fairy.

He’s awoken by a scream outside, gets his little squirrel-sized flashlight, and rushes out to see who needs help. It’s the tooth fairy, and she’s stuck in a spider’s web. He helps her out, and, for a reward, she gives him a magic acorn. There’s a surprise inside, she says.

This excites Squirrelly Gray, and there’s a neat panel of him frolicking with the acorn (“I always wanted a magic nut,” he says, happily punching it in one panel), until he realizes he can’t open it without his teeth. Irony!

Eventually the Hungry Fox comes along and asks what’s bugging S.G., and he has an idea for helping him crack the acorn open: 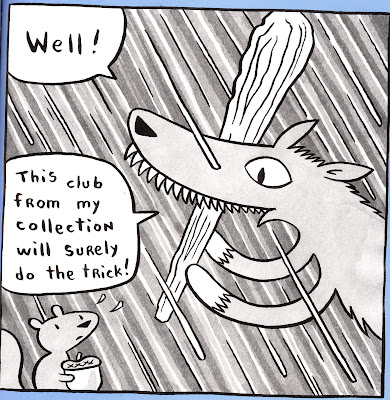 That part cracked me up: The fact that the fox has a club collection. Fox swings the club, intending to brain Squirrelly, but instead he hits the nut, which cracks it open, and out pours a rainbow.

Suddenly, the book is no longer black and white, but full-color. And, for some entirely random reason, the fairy nut’s magic power turned the fox’s club into a flower, which brings us to my second favorite page: 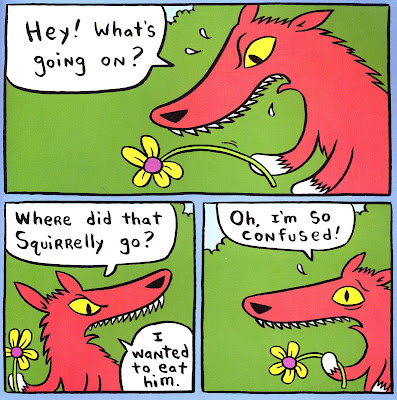 I love the panel of the fox being all confused. You even feel bad for the guy; I mean, why should his club turn into a flower. How does that make any sense?

His crushing depression healed, Squirrelly Gray runs off to play, skipping over a hill top while wearing the cap of the acorn like a little beret.

“And that is why the world we know/ Is colorful and bright./ We all have one young squirrel to thank/ For turning on the light!”
Posted by Caleb at 6:16 PM

Labels: close-up photos of my hands, kochalka, picture books, this is not a graphic novel

Do the librarians look at you funny when you browse the children's section?

Probably behind my back when I'm not looking.

hey there - i just posted an interview with james:

You should check it out. he wrote a new song as well!