I’ve really loved both Aya and its recent sequel, Aya of Yop City, the slice-of-Ivorian-life dramedies written by Marguerite Abouet and drawn by Clement Oubrerie, and when I finished the second volume, I was so eager to read the third that I went looking by more work from Oubrerie to tide me over.

Oubrerie is a pretty prolific illustrator and designer, so I didn’t think it would be too too difficult, but I only managed to find a trio of books with his name attached in the libraries nearby.

The best of the lot is The Good Little Girl (Doubleday; 1998), a picture book written by Lawrence David.

It’s about a good little girl named Miranda who has two not-so-great parents. They come home from work tired, both of them put off her requests to read to her until tomorrow, and then when they sit down to watch TV together, they both fall asleep:

“That’s okay,” she told her dozing parents, “I can tuck myself in. Well spend time together tomorrow at Saturday Family Waffle Breakfast.”

This is only page three, and I am already pretty depressed. The next day, there is no Saturday Famil Waffle Breakfast, because her mom forgot to buy the mix. That’s when Miranda snaps.

There’s a really great two-page squence in which Miranda more or less Hulks-out. On the far left side of the left page, we see a large image of Miranda with a mad, frowny face, and she gets smaller and smaller and angrier and angrier in three consecutive images.

Meanwhile, on the lefthand page we see a little green girl with red eyes and dreadlocks, and she gets larger and larger in the next three images, so that on the far right side of the right page, we see a giant version of the little green girl, and a tiny little Miranda stuck behind her eyes.

The green girl is named Lucretia, and she tells the tiny little Miranda that she’s here to help. She yells that she wants waffles and she wants them now, and that Miranda won’t come back until she gets waffles.

So they take her out to a restaurant for waffles. But Lucretia wants more, and so she demands to be taken to amusment park Kiddyland before she’ll let Miranda come out.

This goes on for quite some time, with Lucretia making increasingly elaborate and cruel demands of the parents, and the parents forced to obey if they ever want to see Miranda again. Miranda can see it all through Lucretia’s eyes—and talk to her—but can’t really do anything to stop it (Oubrerie draws several nice spreads set inside Lucretia’s head, with the outside world visible only through her giant, porthole-like eyes.

Eventually, Miranda’s able to seize control again, and there’s a reverse transformation sequence, in which Miranda grows larger and larger and Lucretia smaller and smaller until the latter is trapped in the former’s eye. Miranda and her parents talk, and they decide to be more attentive, less jack ass-y parents, and the story ends happily, with her parents reading to her: 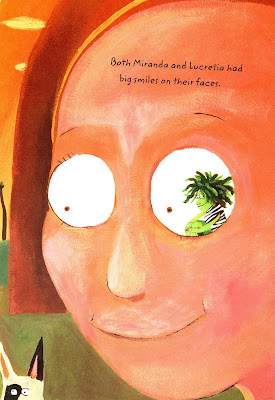 The moral of the story is…well, I think it’s that most people just plain shouldn’t have kids. And that life is hard and sad. Wait, I’m going to go cry for a while.

Okay, I’m back. God, what an emotionally upsetting book. I really liked Kiddyland though; it seems like the least fun amusement park in the world. 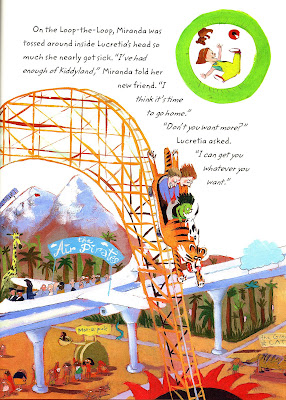 Look at this one ride, The Air Pirate:

You get hijacked at gun-point in a ride shaped like a passenger plane? That’s…fun?

And right below that is the “Man-a-pult,” which seems to be a catapult that just plain throws a person off to their death somewhere. Slithering toward the line for that terrible ride is a gigantic snake.

The other books I found were both poetry books by Marilyn Singer, with Oubrerie illustrations.

Neither It’s Hard to Read a Map with a beagle on Your Lap (Henry Holt; 1993) nor Please don’t squeeze your boa, Noah! (Henry Holt; 1995) are what I’d call good books (although, as always, remember I’m waaaaay outside the target audience for these books).

I really liked the title of the first one, a collection of dog rhymes and gag pages, but the insides are a collection of rather tedious poems about dogs—Limericks, couplets, shape poems—uniformly lame and rather uninspired. Oubrerie’s art at least makes a flip-thorugh worthwhile, and I suppose little kids who are super into dogs or just learning about various breeds may like this, but I didn’t care for it.

It’s kind of neat to see Oubrerie’s style applied to so many breeds of dogs, but none of the images were exactly knock-outs either.

Please don’t squeeze you boa, Noah! is an improvement in that area, at least. I’m not any crazier about Singer’s poetry here, but the subject is much broader—pets, and animals in general—so its far less tiresome.

Here’s one of the nicest images I saw in either of the Singer books. This is only half of it, and it’s out of context—this brilliantly bright cityscape is all enclosed in a dialogue bubble coming out of the mouth of a black and white parakeet named Tricky treat: 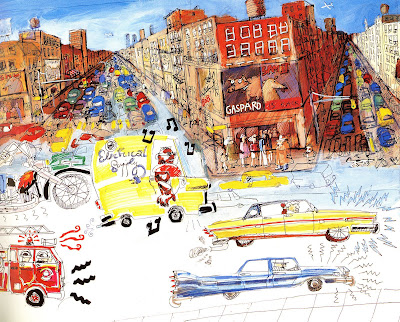 Here’s an illustration for a poem about “Pretty Mrs. Quivers” who “likes pets that give you shivers”: 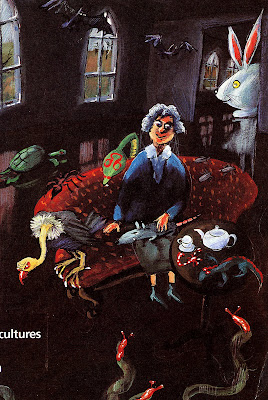 Her dark house is full of scary or creepy crawly animals (outside the borders of my scan, there’ sa framed portrait of a shark on her wall, and an aquarium with an eel in it atop a bookshelf).

While she’s cool with all these animals, ironically, “bunnies frighten her to death.” That explains the horrifying white rabbit in a tutu in the next room. To be fair to Mrs. Quivers, that is a particularly frightening bunny rabbit.

Speaking of rabbits, I love this page, which apparently shows the world through the eyes of a greyhound, who “has a famous habit/ He dearly loves to chase a rabbit”: 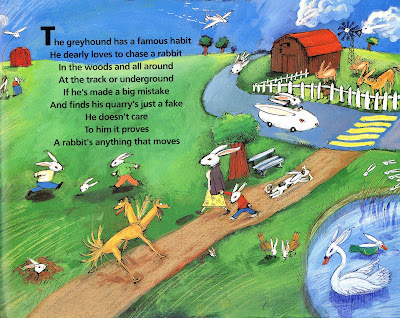 To the left, I suppose those are supposed to be two little human children kicking a ball back and forth that the dog just thinks are rabbits but, doesn't it look like there are two rabbit-people kicking the severed head of a third rabbit person around?

I say we give the auto-industry its bail out, but only on the condition that they promise make fuel-efficient rabbit head cars available to whoever wants them.
Posted by Caleb at 6:26 PM

Oooh. I loved this review. And I loved Aya. Must get my hands on the children's books by Oubrerie soon! Thanks for this :)