Kochalka's Johnny Boo: The Best Little Ghost in the World 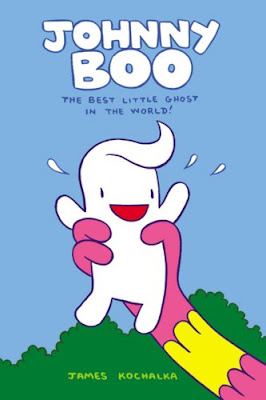 James Kochalka’s Squirrelly Gray definitely had its charms, but over all it struck me as a somewhat awkward work, due in large part to the hybrid format: One page of rhyming narrative poem for every one page of comics, with the information being conveyed often overlapping.

I’m glad Kochalka didn’t repeat the format in his next kids book, Johnny Boo: The Best Little Ghost In the World (Top Shelf). Johnny Boo is a straight-up comic book told in comic book format start to finish, although it is a hardcover with a spine, so chances are you might find it shelved with the children’s picture books rather than graphic novels at your local library.

Like Squirrelly Gray, the book is quite clearly aimed a little kid audience, however it’s extremely easy to appreciate its charms if you’re a grown-up, cynical old crank (like me). That may be, in large part, because I already know and like Kochalka’s work so much, and I tried imagining what it would be like to encounter this book without ever having seen anything else of Kochalka’s.

I’m as positive as I can be that I’d still love it. Kochalka’s art is as cute as ever, his character designs are all highly inspired and there’s a sort of absurdity to the simplicity of the proceedings that I found a great deal of humor in. The story and dialogue isn’t quite sarcastic, and Kochalka’s not parodying himself, but some of his dialogue seems chosen specifically because of how ridiculous it sounds to adult ears.

So here’s the title page: 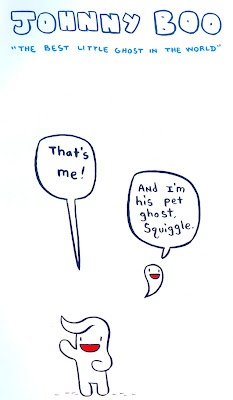 Johnny Boo and Squiggle have come out to meet the reader. As you can see, Johnny is a roughly humanoid ghost with an ectoplasmic pompadour, and Squiggle is more of a traditional, leg-less, floating ghost, albeit it one reduced to the simplicity of a rain drop shape.

I can’t quite wrap my head around the fact that Squiggle is the “pet ghost” of another ghost.

Squiggle then flies through the next few pages—the publication info, the dedication, etc—before sailing into chapter one. It’s a nice day outside, and the two ghosts are playing in the sunlight. Not very ghost like, really.

Squiggle is flying above the ground, saying, “You can’t catch me, Johnny Boo! I’m too fast! I’ve got Squiggle Power!”

The earthbound Johnny gives chase on foot, noting that he’s “got BOO Power!”

The Squiggle starts breaking out some loop-de-loops (the sound effect for which is “SWISH DE SWOOSH”) and there’s some brief discussion over whether or not loop-de-loops constitute cheating.

Finall, Johnny breaks out the Boo Power, which is him shouting “BOO!”, which scares Squiggle and flips him to the ground.

Squiggle is pissed and won’t accept Johnny’s sorries, but does accept his offer of ice cream. And not just any ice cream, it’s Secret Ice Cream, which Johnny has buried.

The pair sneak off to find it, mindful of Ice Cream Monsters, which frighten Squiggle. And low and behold a giant, cycloptic pink and yellow ice cream monster appears!

But is he a good ice cream monster or a bad ice cream monster? Applications of both Boo Power and Squiggle Power will be necessary to find out, and help navigate the series of problems caused by the Ice Cream Monster.

I don’t want to spoil the specifics of these problems and their solutions, but rest assured it all works out in the end. Here’s the last page of the story, with a nice example of Kochalka’s kid-friendly but adult-funny dialogue: 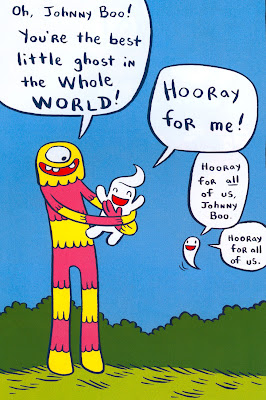 That’s followed with a few more pages of Johnny and Squiggle wandering through the leftover pages, including the pair looking at a funny looking black and white “photo of the author when he was a baby.”

“Who’s that baby, Johnny Boo?” Squiggle asks, “He kind of looks like YOU!”

He is pale and has he same weird proto-pompadour.

Kochalka uses the same bright colors and bright colored lines (in his art as well as his bubbles and lettering) that he did in Superfuckers and Squirrelly Gray, and I’m fairly positive that this may be the single cutest thing Kochalka’s ever done. Now he’s an artist with a lot of cute things under his belt—hell, his artist’s manifesto is entitled The Cute Manifesto—but with Johnny and Squiggle, he’s reduced character design about as far as he can without sacrificing the character part of character design.

If you’d like to see more, Top Shelf has the first five pages of Best Little Ghost in the World preview-able. And if you like what you see, Kochalka and Top Shelf have two more Johnny Boos scheduled for next year, Johnny Boo: Twinkle Power and Johnny Boo: Happy Apples.
Posted by Caleb at 7:22 PM

Given the fact that you read and post about so many children's books, I find your claims of cynical crankitude highly suspect.

I'm a cynical crank too, and yet I love Kochalka's work, including Johnny Boo (whose only flaw is being too short).

I think cynical cranks are that way because they're actually disappointed idealists. So something with the charm and purity of Johnny Boo is right up our alley.