This is not (quite) a graphic novel: Bossy Bear 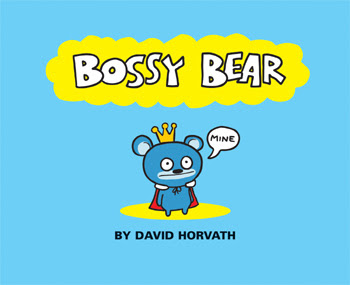 Writer/artist David Horvath's Bossy Bear (Hyperion; 2007) is unquestionably a children's picture book, but it's one of those that is somewhat near the border to comics. Most of the words are in prose, but they are very short bursts of words, floating above the images. The dialogue, what little of it there is, appears in comic book-style dialogue balloons. And while the pages aren't broken into panels, if we accept each page as a panel unto itself, well, this could very easily be considered a comic.

Either way, it's pretty awesome, even for those of us who long ago learned that no one likes someone who's too bossy, and that we should share stuff with others.

This is how the book opens, 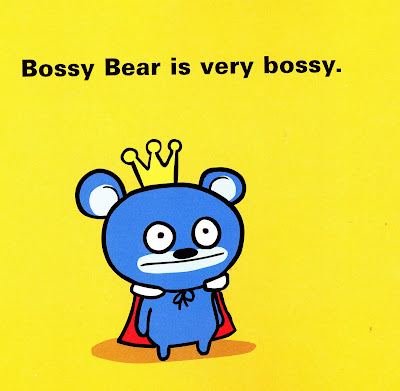 with a LOLcats like, Internet meme-friendly declaration. I've cropped the image, but only the field of mustard yellow that serves as a background. Most of the images in the book are exactly this bold: A bright-colored character given weight and dimension only by a shadow, standing in a big rectangle of color. Sometimes there are other characters or objects, and sometimes space is hinted at by backgrounds or the size of figures, but more often than not its just a simple character on a color, Horvath's "camera" zooming in or out to add drama occasionally.

If something about Bossy Bear looks a bit familiar, that's because Horvath is the co-creator of Uglydolls (along with his wife Sun-Min Kim), and these characters share the same designs sensibility, although they all tend to be recognizable animals instead of cute "ugly" monsters.

But back to the story: Bossy Bear is bossy, as his crown and ermine-lined cape probably clued you in on. "He likes things his way all the time," page two tells us, and page three adds "Bossy Bear spends his day telling others what to do."

The following pages show Bossy Bear interacting with the world, telling a variety of blank-faced, stupid looking animals to clean his room and give him things, yelling at a snail to crawl faster, demanding everything from Santa, etc.

About halfway through, a blank-faced, stupid-looking pig and dog ask B.B. if he wants to play with them, but leave when he gets bossy.

This leads to an existential, double-page spread, where we see Bossy Bear on the far left of a two-page field of empty gray, thinking to himself "Oh..."

Has he learned his lesson? Perhaps. (Spoiler alert!)

Soon a turtle with a red baloon comes along, and Bossy Bear demands it. To his surprise, the turtle complies, giving Bossy Bear something to think about.

"You don't think I'm bossy?" Bossy Bear asks, and the turtle responds "You are bossy...but you don't have to be."

So Bossy Bear walks off page, then returns with a present for the turtle. 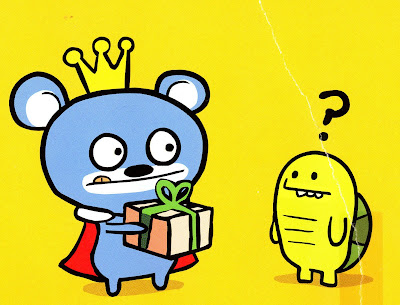 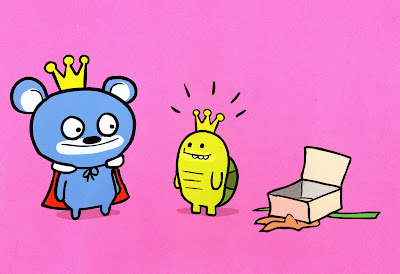 The turtle puts it on and declares "Let's Go!" while he and Bossy Bear walk off the page, B.B. making eye contact with the reader. 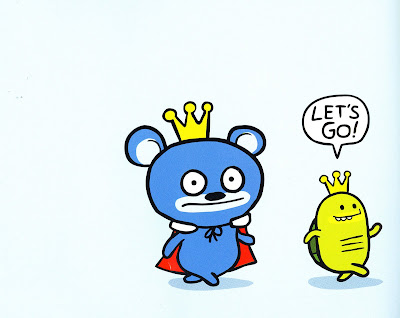 The first time I read this, I just thought that was Bossy Bear's blank-ish, "I just learned a lesson face," but on the second and third reading (Um, it's pretty short, so three readings is, like, ten minutes time all together), it seems clear that Bossy Bear has realized that he might have just created a monster, and is, for the first time, learning what it means to be bossed around.

The moral of the story? Crowns and ermine-lined red capes look awesome, and you should totally wear them all the time.
Posted by Caleb at 4:13 PM

Labels: bears, picture books, this is not a graphic novel