The Other Secret Invasion: Millennium #8

Long, long ago—maybe eight or nine months ago, although it seems like it's been years—I noticed that the basic plot of Brian Michael Bendis and Leinil Francis Yu's Secret Invasion story sounded a lot like the basic plot of DC's 1988 hostile-aliens-invade-Earth-by-infiltrating-the-heroes storyline, Millennium (Not that the observation was unique to me or anything; anyone who's read Millennium probably had the exact same reacation). And I thought, Hey, maybe it would be fun to re-read an issue of Millennium each week I read an issue of Secret Invasion, and publish an examination of it.

Well, as it turned out, it wasn't much fun of at all, and, after a certain point, it became kind of a waste of time, given that DC actually took my advice and published a trade of Millennium for the express purpose of saying, Hey, comics readers! Marvel's biting off our worst story ideas from 20 years ago!

But, at that same point, I didn't want to give up. Who wants to be known as The Guy Who Wrote Five Really Long Posts About Millennium Then Gave Up, instead of The Guy Who Wrote A Really Long Post About Each Issue Of Millennium. Having come so far, how could I abandon my quest to make EDILW the Internet's number one source for disucssion of DC's 1988 weekly series Millennium? (Shit; I just googled "Millennium, 'DC Comics'" and EDILW is only the seventh site to come up. Perhaps this was all for naught...)

So here it is! The very last post about the very last issue of Millennium! And then I'll put these crumbling yellow comics back into their cardboard coffin and never see them again.

So here we are at Millennium #8, “The Rising and Advancing of Ten Spirits.” 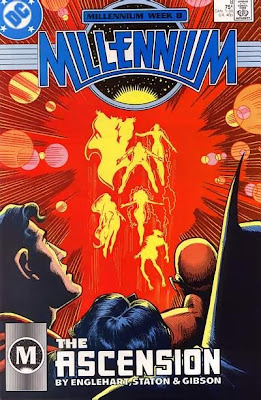 In the last issue, we saw that the Manhunters were defeated on earth after Earth’s “heroes” had destroyed their planet and murdered every last one of them, the lost space heroes successfully returned to earth, it was revealed that Booster Gold had secretly invaded the Manhunters… what’s left to resolve? Oh yeah, all that boring New Age-y business about the ethnic stereotypes who are to guide humanity into “The Millennium.”

We open outside Hal Jordan’s condo, where the heroes have all gathered to form an aisle for some sort of wedding or graduation type ceremony: 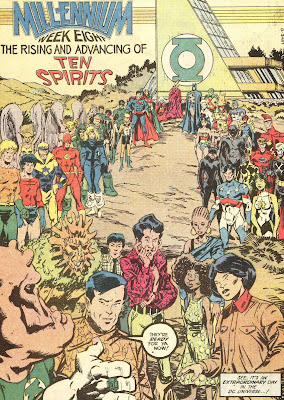 “They’e ready for ya now!” Kilowog says, and rushes to push play on an off-panel boombox that will play “Pomp and Circumstance.”

Writer Steve Englehart starts out with the weirdest narration box: “See, it’s an extraordinary day in the DC Universe…!”

The Immortals, now rapidly aging because, well just because, recap just what the hell’s going on here, 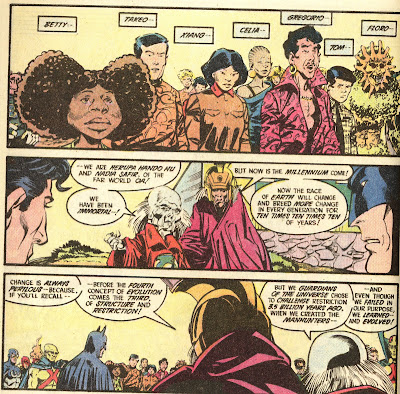 and then it’s time to start passing out superhero powers and makeovers.

First up is Xiang. Herupa shoots green light out of his forehead and Nadia shoots violet light out of her head, and the result is that Xiang is no longer Xiang, but 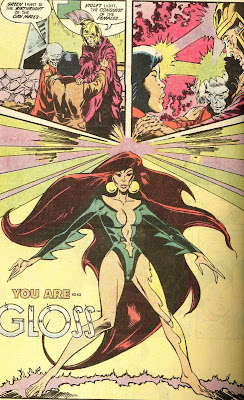 Here’s the saddest part of this issue and, indeed, this whole series. Look closely at Gloss’ name there. Not only does she get her own special logo, but there’s a teeny little “TM” after it. DC trademarked Gloss. They were so confident that they had the next Wonder Woman on their hands, or at least the next Infinity Inc. character, that they went and put a TM after her name. They do this with all of The Chosen, who will all become pretty terrible superheroes.

“It’s-- --Clarity! Power! Sleek Sensation!” Xiang shouts, and explains that the Chinese know feng-shui, and that she can draw power from the earth’s dragon-lines, power and “sinuous skill!”

Betty points out to the others that Gloss said “the Chinese,” as if she herself were no longer Chinese, and they immediately catch on. 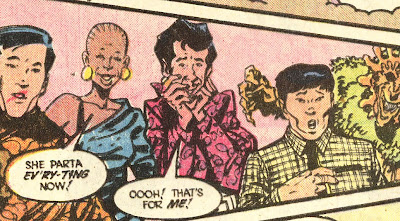 I know I’ve said this before but man, Gregorio is just. So. Gay.

I know there are supposedly more and bigger name gay superheroes in the DCU now, but have we really come that far? Renee Montoya, Obsidian and Batwoman may be gay, but add all three of them together and they’re still not half as gay as Gregorio.

This Xiang-to-Gloss sequence establishes a pattern that most of the book will follow. The Chosen say some nice things to one another, one of them walks up for the green and violet ray blast and they become a lame-ass superhero. They then explain their powers, and some DC superheroes strain to make some connection between themselves and the new guys, while cosmic onlookers from around the universe throw in their two cents worth (Here, some Greek goddesses on Olympus say “Diana’s involvement in man’s world has borne its first fruit!” while the Parliament of Trees talk about The Green and Woodrue.

Next up, is Takeo: 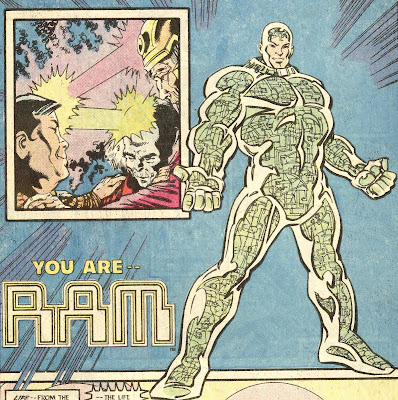 who, as his new codename suggests, now has computer-y powers. “Fields link—Data spiral through the ether —through my fingers —for me —Random Access Memory!” 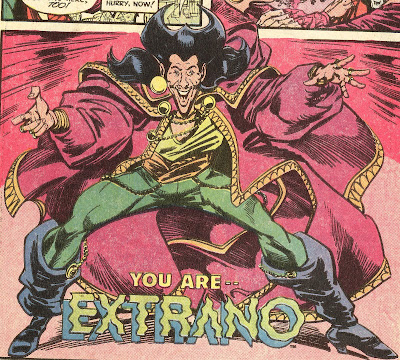 who is somehow made even gayer.

This is the face of gay superheroes in 1988: 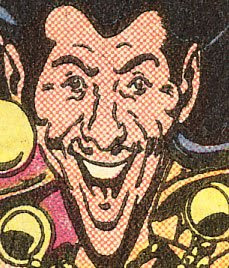 Extrano explains his powers—“I’m a witch!”—while The Phantom Stranger stands atop a rock, making puns to himself. 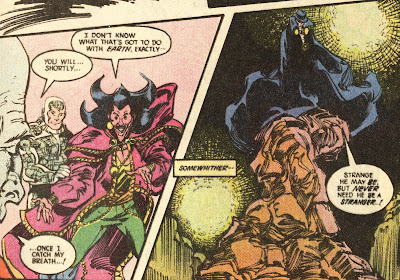 the earth, I guess? She’s not really a superhero per se, but a funny looking globe symbolizing the planet and providing a connection with Gregorio. 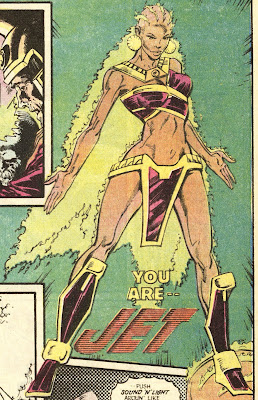 Next up is Tom Kalamaku, but he decides to take a pass, and explains that it’s basically because his wife has been nagging him all miniseries and the dude is totally pussy-whipped: 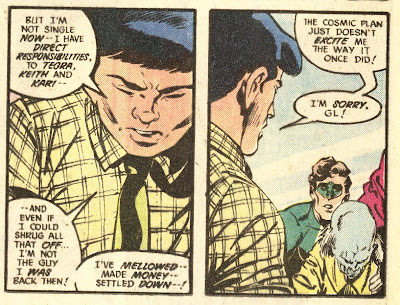 Hal understands, and takes the opportunity to slur Tom’s ethnicity for the 5,000th time in his life: 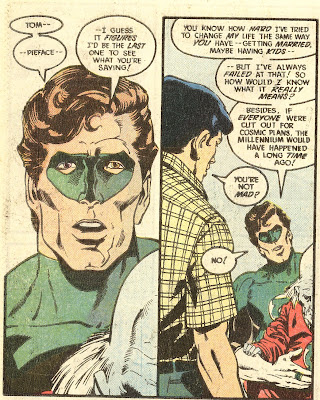 As an aside, I prefer when Hal’s mask has the eyes pupil-less white triangle, a la Batman’s. Something about his mask really creeps me out otherwise:

Since Tom is such a baby about the whole thing the Immortals pick Harbinger as his replacement, but she bolts, so they give Tom his power in latent form, to protect him from fat white racist South African guy who washed out of the enlightenment program. He is determined to get his revenge: 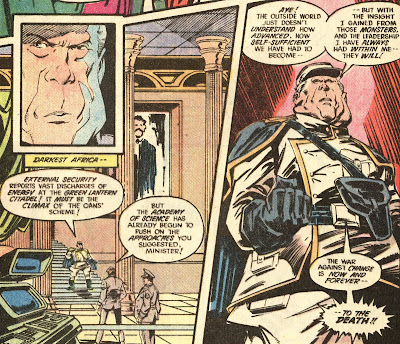 Sick of this shit, Superman and the real superheroes decide that since their hosts have died, they don’t have to feel compelled to stay any more and get ready to bolt, but not before Batman and Brainwave each make a pass at Jet: 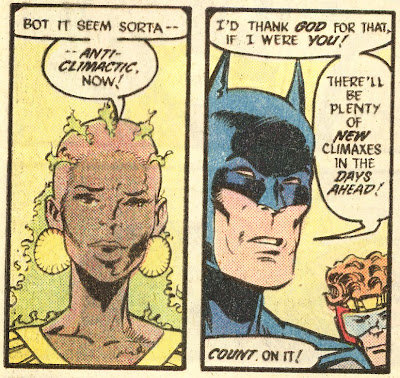 And then the old superheroes all take off in a pretty cool splash panel that Staton unfortunately laid out diagonally so I can’t scan it in its entirely: 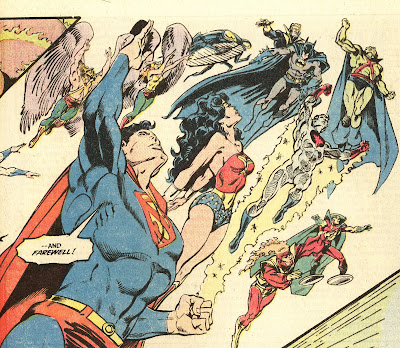 And we get a final, posed panel of the new super team: 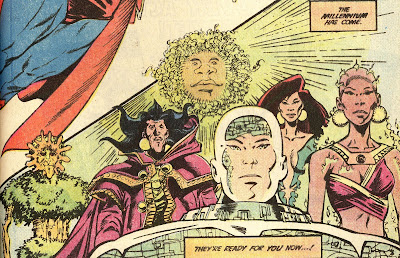 And that's the last anyone would ever see of these new superheroes.

Thanks, I've been enjoying this series of posts. Wow, even when I was a kid I thought Millennium was a stinky pile and now...

Anyway my pedantic streak requires me to point out that the New Guardians did go on to star in their own 12 issue series and that they've been seen as recently as the Jimenez run on Wonder Woman.

Millennium definitely has its upsides. The thing is, they all involve the Suicide Squad and that "section" of the crossover. Some of that stuff was really, really good.

Did Ostrander ever get to do a major event? It was englehart on Millennium. Giffen on Invasion. Who did Legends? That was Ostrander and Len Wein or someone right?

Good GOD, Millenium was horrible...and yet I find that I actually enjoyed reading it. Possibly because it WAS so horribly awfully campily bad, that it was good in a really strange way.

Plus Gregorio is just fabulous.

Matt's absolutely right about Ostrander and Millennium. Also: Ostrander's Squad issues were the best thin about War of the Gods, and his Spectre issues were the best thing about Final Night, the Eclipso storylines, the post-ZH Zero Month, etc. (Not the best part of Underworld Unleashed, though-- that was Starman.) Even more than Peter David, Ostrander does great work when bringing his titles into linewide premises.

For all that, Legends is kind of eh. The premise is silly, the character roster is artificial (you can't use a book that's about destroying earth's belief in its superheroic legends as a launching pad for a whole bunch of new heroes-- the "legend" part and the "never heard of 'em" part work against each other) and the scale's wonky. Great cosmic plan; small mob beating up Robin. Subdue the earth; unleash a few hellhounds on it. Lots of great writing and great moments, and it's not awful or stupid in the way so many crossovers are, but it's not great either.

The minicrossover within the Ostranderverse, the Janus Directive, kicks ass. But at the DCU level, Legends and the 52-ending World War III have given Ostrander a surprisingly low batting average.

Anyway my pedantic streak requires me to point out that the New Guardians did go on to star in their own 12 issue series and that they've been seen as recently as the Jimenez run on Wonder Woman.

Oh, I know. I was just exaggerating how short-lived the heroes of the new millennium were. None of them actually made it 2000...

It held up okay in '06 or '07, whenever I last read it. I read it during Civil War, and it wasn't too bad. The basic idea was okay, and the last chapter assembling a pretty temporary Justice League. And I liked the art a lot. But, otherwise, yeah, not so great.

While I've no doubt DC had high hopes for characters to be spun out of MILLENNIUM, it was probably just standard practice to add a "TM" to anything that resembled a logo. You can do that without having to file any paperwork or pay any fees, though it wouldn't carry the same weight as having registered a trademark (that's the R in a clrcle).