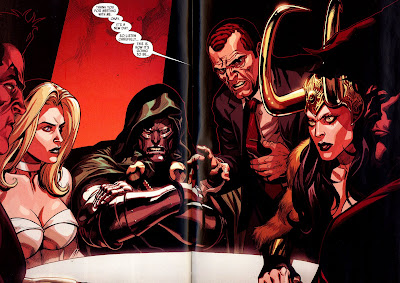 Geez Norman Osborn, you're a big, powerful businessman type who's been running a federal superhero-busting organization for a couple of months, you just got a big, huge promotion to be in charge of The Avengers and the entire Fifty-State Initiative, and you decide to hold a super-secret meeting in the basement of Avengers Tower, a meeting with two highly irritable monarchs, the Norse god of mischief, the kingpin of super-crime and an X-Lady, and that's the table you decide to use?

Really? That's the best table you can supply for that particular meeting? My kitchen table is bigger and more stately than that. That looks like a piece of patio furniture.

Just look at poor Dr. Doom there. Dude is pissed to be seated at such a small table. He's like one second away from "Doom demands elbow room! Bah, Namor and Red Hood won't quit kicking Doom's feet under the table!"

This isn't a very auspicious beginning to your dark reign, Osborn.
Posted by Caleb at 5:52 PM

"Who dares order the Prince of Atlantis to go fish? Imperius Rex!"

and where are the snacks...how can you plot the overthrow of the Marvel Universe without SOMETHING on a cracker???? That is why Doom is pissed...DOOM NEEDS CHEESE STRING!!!

Under Bendis? No. In his mini, written by Brian K. Vaughn? Yes. Or in McDuffie's Beyond! Yeah. But hell, McDuffie made Kraven Jr and Flamebird cool and interesting...

It hardly matters; if Loki turns to the left suddenly at any point in the meeting, s/he's going to totally brain him with her giant-ass horns.

I know that Namor can sometimes be cranky, but I've never seen him as an out and out villain, while Emma is supposed to be reformed and all of that. Even Loki isn't that bad, he just likes messing with Thor...at least in the old myths. The Hood is a two-bit thug. Doom could fry any of them on a whim.

What POSSIBLY makes old Normie think that he can give orders to THIS group? I say, that he's EATING that table by the end of the meeting.

Norman obviously picked a table he could survive being hit with.

Seriously, how does the book transition from "This is how it's going to be..." to anything other than Namor killing the speaker outright?

There's about to have a bit more room soon. From the way they're staring at each other, I'd say Loki and Emma are about 30 seconds from being naked on the floor.

Lessee...
Emma's probably spying for the good guys, Loki tends to mess up any plans that come along for the fun of it, Namor tends to clobber anyone who condescends to him, and Doom bows to no man, so that's probably an exploding Doombot placed as an example of the excellent Latverian sense of humor. Seriously, is there any way that group could be more doomed to failure? Any way at all?

Now, if Devil Dinosaur was there...

As I recall, Peter David's Hulk had about the right evaluation of that crossover.

Ah, but Doom wasn't involved in that batch of shenanigans!
That was a Doombot. A super adaptoid Doombot.

While I've made the Acts of Vengeance comment myself, Norman did make ONE smart thing over Loki. He didn't decide to create a group of bad guys and then put a Nazi in the chair next to a pair of Jews...

To be fair, Doom's mask always looks super-pissed. Taking that into account, I'm reminded of an old man napping.

I find it funny that the bulk of reactions to this last page weren't gasps of surprise, but people pissed that Bendis is ruining at least one character (Emma Frost, and possibly Namor too). Granted, with his record, their worry is justified, but I just find it funny that it seemed to have the opposite reaction than intended.

What cracks me up is how the entire blogosphere (buzz word) has complained about the table more than the ending itself. Is the small table really that big of a deal? I'm more concernd about the direction of the Marvel U itself.

I will be proceeding with much more caution with Dark Reign than I did with Secret Invasion.

Oh shit, I just laughed harder than I have in a long time. It's so true!

I really don't get the complaints about Emma and Namor. This is the MU of Tony Stark - troubled fascist. It isn't a good guy/bad guy world anymore. Of course Emma wouldn't turn down a piece of the pie-chance to guide the ship, if offered, "doing good as part of the system" and all that.

That said, I have no idea why Loki and Doom would be there. I can't imagine Norman going. "You know who we should invite. The Norse god of trickery and/or evil. He or she or whatever has a lot to do with shaping American policy, right?"

...and Doom would just scoff at the entire endevour. But then Bendis' writing of doom in Mighty Avengers wasn't quite ... good or anything.

I don't think Doom was invited. He's Namor's ride home. The Atlantean's have taken up residence in Latveria, after all...

Namor: "So, I've got this Dark Illuminati thing going on in New York..."
Doom: "Doom demands attendance!"
Namor: "Well... The invite didn't say 'Plus One'..."
Doom: "Nobody invites Doom anywhere..."
Namor: "The Avengers, featuring a nutcase and two recovering alcoholics, arrested you!"
Doom: "Doom was tired!"
Namor: "Look, whatever... Give me a lift, I'll see if you can sit there. Don't show me up."

Except that it's inconsistent with how the character's been written for the last decade and a half. Oops!

The crease in the middle of your scan makes it look like there's an umbrella mounted on the table, possibly shilling Campari.