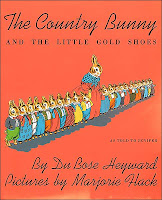 I had not given this particular book a thought in many years, and had forgotten it even existed until I saw the mother bunny in a shawl surrounded by the long line of her many children on the cover. This was one of the many storybooks my late grandmother kept at her house for her four grandchildren, and I was once quite enamored with it, even if I had forgotten the fact.

Re-reading it upon rediscovery a few years ago, I was surprised at the fact that I was remembering the images and story points as I was reading them, and yet also noticing that the artwork wasn’t quite as elaborate or as vivid as that memory.

It’s still a very good book, however, even if my forgotten childhood memory of it was that it was bigger, more expansive and more detailed than it now seemed (I wasn’t as sophisticated a consumer of art and story as a child, and was much more easily pleased than I am now).

The Country Bunny and The Little Gold Shoes (Houghton Mifflin; 1939) is the work of writer DuBose Heyward, who I assume is much better known for his Porgy and Mamba’s Daughters, who gives some credit to his daughter in the story’s conception, as he nailed it down by telling and re-telling it to her (the credits read “As told to Jenifer”).

It’s a very nice little story, and one that presents a surprisingly forward-thinking heroine, although as a child it was the artwork that impressed itself the most upon me.

It’s by Marjorie Flack, who is also no longer alive, and whose work I’m unfamiliar with (The Internet tells me she illustrated a series of books about a dog named Angus, and is best known for The Story of Ping).

Her rabbits are very realistic looking, as if they were the very same rabbits you’d occasionally see hopping around your backyard just before evening, only these ones stood on their hind legs and wore clothes. Thus the mundane and fantastic were combined in the character designs to a point that made the rabbit characters all very exciting to me as a child; they weren’t just drawings of rabbits, they were actually rabbits. They're very Beatrix Potter-y looking rabbits. Like, when I saw one of Richard Scarry's rabbits or cats, I knew it was just an artist drawing a picture of a rabbit or cat for his storybook, but when I'd see a Beatrix Potter-drawn rabbit or cat, I knew it was a picture of a rabbit or cat, but I didn't think of it in terms of the agency (In my child brain, realistic drawings weren't any different than photographs).

I now realize that Flack's drawings were also likely quite appealing because they were so damn cute.

It’s an Easter story, and had the feeling of being a classic or authoritative one, I suppose because of its great age (It was already forty years by the time I was born, and both Heyward and Flack were born in the nineteenth century).

The story opens with an image of five rabbits, dressed in coats with tails, vets, bow ties and short little pants out of which stick their big, long feet and their tails. Two are white with pink eyes, and two are brown and each carries either a basket or an egg.

“We hear of the Easter Bunny who comes each Easter Day before sunrise to bring eggs for boys and girls, so we think there is only one,” the story opens right below the image, and continues to explain that there are five Easter Bunnies, and that they are “the five kindest, and swiftest, and wisest bunnies in the whole world.”

When an Easter Bunny gets too old to do the demanding work any longer, the aged and wise Grandfather Bunny summons rabbits from all over the world to the Palace of Easter Eggs to choose a replacement.

It’s a role that many little bunnies aspire to, including “a little country girl bunny with a brown skin and a little cotton-ball of a tail.” 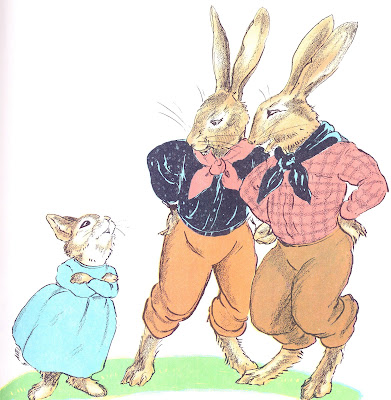 The rich, “big white bunnies” as well as the “Jack Rabbits” laughed at her and told her “to go back to the country and eat a carrot.” I suppose that’s a pretty bad insult among rabbits.

When she grew up, she eventually had a husband, and soon found herself the mother of twenty-one babies. 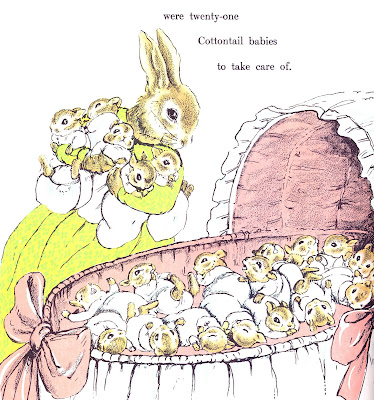 You can see how this would be appealing to a little kid. Look at all those bunnies! Baby bunnies!

Curiously, while a husband is mentioned prior to the arrival of the babies, he’s never mentioned again, and certainly doesn’t ever appear in the story. Did he run off? Was he eaten by a fox or made into pie by a farmer? Who knows. Cottontail, as the author sometimes calls the country bunny protagonist, is the sole parent of all these little bunnies.

That put an end to her dream of being an Easter Bunny: Twenty-one babies took a lot of time and energy, and didn’t leave much time to dream about anything else (The big white rabbits and Jack rabbits laugh at her and say “Only a country rabbit would go and have all those babies;” I’m not sure what to make of that statement. Do country rabbits/folks know less about family-planning? Is that the implication?)

When the babies “stop being babies,” there’s a wonderful four-page sequence in which Cottontail assigns each pair of them a special household task that they become especially adept in. Two are in charge of cooking, two in charge of bed-making and so on; once all the chores are accounted for, pairs are given arts to pursue for the benefit of all, so two learn to sing, two become artists and so on. (The leftover, twenty-first bunny’s task is simply to pull out his mom’s chair when they sit down for dinner, as he’s the politest bunny). 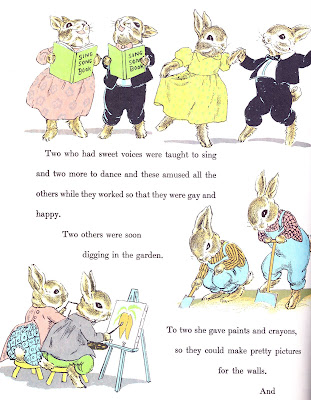 Well, as you may have guessed from the opening, there comes a time when an Easter Bunny retires, and the Grandfather Bunny calls for an assembly at the Palace. Flack renders him bigger and slightly fluffier than all the others, making him seem aged in the shagginess of his fir and the way his ears are tilted slightly back. He is dressed in a suit with tails and a big lacey collar and cuffs, and leans on a cane.

Many rabbits try out, but he doesn’t find quite the rabbit he’s looking for. Not until he asks about Cottontails 21 children, and she explains how she raised them, which demonstrates her wisdom and kindness. To prove her speed, she tells her children to scatter, and then promptly chases all 21 down and reassembles them before Grandfather, earning the job.

On Easter Eve, she returns to the palace and meets the other four Easter Bunnies— 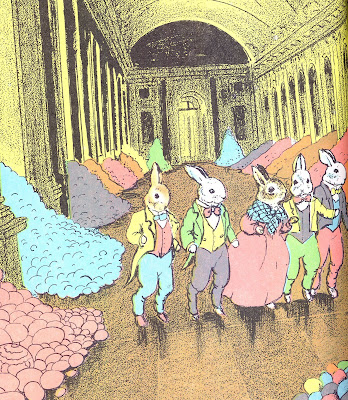 —all of whom, I now notice, are male, and are dressed much more well-to-do than her.

By the end of the night, she has only two more deliveries to make: One to a sick child very far away atop a snow-covered hill, and the other two her own children, who are taking care of the house in her absence.

She’s about to make it to the sick child’s cabin just before the dawn deadline, when she falls and rolls all the way down the hill, hurting herself in the process. Struggling against the pain in her leg, she attempts again, and, for her bravery, is awarded the titular shoes by Grandfather Bunny. These allow her to hop painlessly up the hill and make the delivery.

Returning home, she sees the children have all done their tasks flawlessly, and she bring their basket to their bedroom, giving readers another cute image: 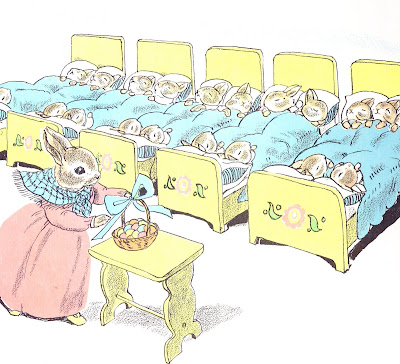 And that’s the story of the country bunny, who ultimately fulfilled her life’s ambition because of, rather than in spite of, what at first seems like an insurmountable handicap and a reason to give up on that ambition and focus her attention elsewhere.

I realize Cottontail is the protagonist and all, but I think this little guy is my favorite character: 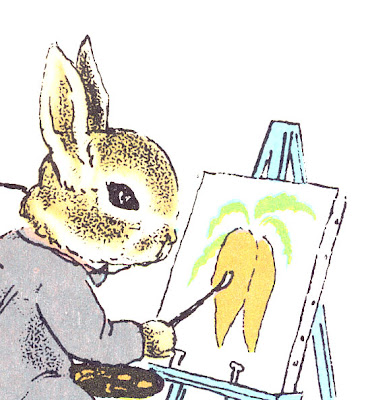 He's so intense! He's just painting a couple of carrots, but he's painting those carrots as hard as he can.
Posted by Caleb at 6:31 PM

Man, am I the only one who is totally creeped out by realistically drawn giant humanoid-rabbit hybrids dressed in regular clothing? Those jack rabbits and their backwards knees and all . . . oof. Creepy as Uncle Wiggly! Seriously nightmare inducing.

But they are cute as babies.

OMG, I had TOTALLY forgotten about this book. YES, I liked it when I was a little kid, too. Funny -- I didn't think of it as a "pro-feminist" tale when I was younger, either. The fact that the protagonist was a female bunny just didn't matter to me. Perhaps that's the sign of a really good story -- when the gender of the hero doesn't matter.

I think I have to get this book for my daughter now!

I love this book, it's so beautiful. The same thing happened to me as I Re-read it as an adult, I had such a strong imagination as a child that I remembered the egg at the end so different. Everything was so artistic and grand and beautiful, I didn't even clue into the feminist part, which when I re-read it for my little girl, it was totally empowering and made me want to imprint my child with such a fantastic book.

We just saw HOP today and she just read the book 'The Country Bunny and the little Gold Shoes' and I am so glad as it was a wonderful balance and very subtle imprinting of what challenges life can present and how one can overcome them.