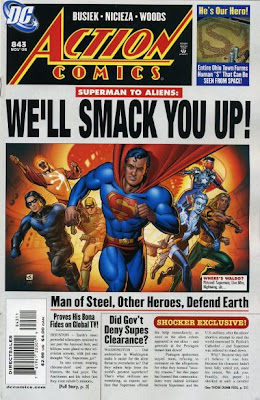 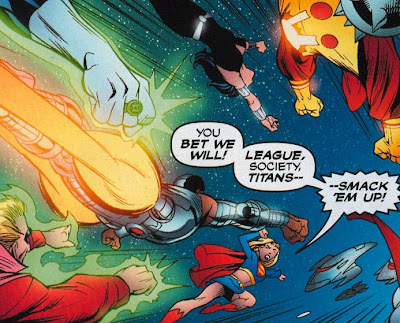 Detail from Trinity #47, which was written by Busiek and drawn by Mark Bagley and Art Thibert
Posted by Caleb at 7:32 PM

Never heard that term before but its already played out...always a bad sign.

Hey, I thought it was funny the first time.

Cyborg can fly now? All the better for smacking people up I suppose...

LurkerWithout said...
This comment has been removed by the author.
10:01 PM

We'll pull out your spleen and wear it as a hat.
We'll stomp on your toes real, real hard.
We'll make you cry for mommy and then we'll smack up your mommy.

Listen male writers over the age of 30: kids don't have a "kewl speak," and whatever some kids actually think is cool to say isn't cool either. A lot of kids just speak like normal people, with either fewer curses or more.

DC isn't likely to let me say "We'll fuck you up."

Hey, I thought it was funny the first time.Oh, I loved the headline...almost as much as imagining Superman delivering it at a press conference. I liked that whole arc quite a bit, actually...

So I'll make do...Ohhhhhhhhhhhh...I didn't think of it in that context at all. Now Supergirl's battle cry makes sense.

And hey, thanks for stopping by...

Wow, Caleb, you chose the same detail from Trinity #47 as me: http://crisisonearthprime.blogspot.com/2009/04/whod-like-cocktail-34.html

Well I think the connection has been well established, though some people find it off putting.

Right, that's a context that demands perfect synonyms, right there.

Much in the way that, say, "fucked up" means "had sex vertically." We're just literal that way.

"Right, that's a context that demands perfect synonyms, right there."

Who's assuming what now?

As you're a male writer over 30 and therefore sorely out of touch with youth lingo, I highly recommend using the Urban Dictionary for all your euphemistic needs.

It's not meant to be. If all I was looking for was an equivalent meaning, I could use "mess 'em up," which sounds flat to my ear.

>> As you're a male writer over 30 and therefore sorely out of touch with youth lingo, I highly recommend using the Urban Dictionary for all your euphemistic needs.>>

No thanks. On the one hand, I wasn't in touch with youth lingo when I was a youth, either. On the other, I do use the Urban Dictionary from time to time, along with other sites, but I'm not going to make it my primary source because I specifically don't want to make comics that are instantly dated by having too-specific current slang in them. I prefer to go for either relatively-timeless slang or nonexistent slang that has the right sound without being tied to any particular era.

I think it's pretty clear in both instances that neither character is suggesting the injection of heroin into one's foes, and that the audience will largely understand that the use of the word "smack" has more in common with "smack down," "smack around" or "smack upside the head" than with "smack my bitch up," a phrase most of the comics-buying audience probably assumes is about beating up one's girlfriend, anyway (as do some in the Urban Dictionary). But I wouldn't use, say, "smack those bitches up," even if DC would allow it, since I think that's very clearly a Prodigy reference, and that implies Prodigy's meaning.

But "smack" has meant to strike or beat for a long long time, so I'm confident people won't take it to mean heroin, a kiss or a fishing boat.

And if some readers don't like it, that's fine, they're absolutely entitled. But it's not because I'm over 30 -- the comics I wrote when I was under 30 attest to that.

Of all the comic book creators Ive seen swing by a blog or board to clarify/defend something Ive always thought Kurt Busiek was the clasiest at it. (followed by Fabs and Rags probably, not that Ive ever actually made a list or anything.)

Hey, has anyone else ever tried to correct the ratings on Urban Dictionary (when people have obviously got things wrong, like saying that `what is a man, a miserable pile of secrets' is a quote from Castlevania, when really castlevania was quoting Andre Malraux. Or that `throwin bows' just means fighting, rather than the more specific punching with an elbow follow through) by going back and up/down voting for things, or is it just me?

Defend "smack 'em up" all you want, but it sounds silly, like a old male writer attempting to write what he perceives to be "kewl" teen speak.

Defend "smack 'em up" all you want, but it sounds silly, like a old male writer attempting to write what he perceives to be "kewl" teen speak.Okay you made your point and are just repeating yourself now.

Please be nice to the nice man who was nice enough to spend a few paragraphs addressing your anonymously posted complaints.

I just noticed a weird phrase getting repeated a second time, I didn't mean to start a fight over it...

The odd part is the assumption that I'm an old white man attempting to write "kewl teen speak" -- in a tabloid newspaper headline.

Teen speak in a newspaper headline. Along with such other gems of cutting-edge teen journalism slang as "He's Our Hero," "Did Gov't Deny Supes Clearance," and that teen favorite, "Shocker Exclusive."

I think you've fastened on a single erroneous idea, H, and have been repeating it no matter what response you get. I don't often make attempts at kewl teen speak -- not even when I was an unkewl teen! -- and I actually agree with your originally-stated policy. Most teens talk a lot like grownups, maybe a bit more casually.

But your argument is recursive -- your evidence for the "fact" that I'm failing to write teen slang is that it doesn't sound like proper teen slang, which depends on the assumption that it's an attempt to write teen slang. If it's not, then the fact that it fails to sound like teen slang has a simpler explanation -- it's not an attempt to do so. I mean, feel free to check out the other Supergirl dialogue I've written (or the other tabloid headlines, for that matter) and see if there's a pattern of using teen slang in them. There isn't.

Ah, for the days of Bob Haney teen-speak, of "Merciful Minerva! That wagon-wheel -- it'll freak out those shing-a-ling lovers like forever, unless I do my own thing -- like fast!" and "Mm-mm! That Eddie Tallbow, he's dreamy -- he can wax my slats any time!"

Regardless of how you define the ohrase, I'm pretty sure Kurt Busiek just smacked up hdefined.

Nope, Hdefined keeps replying, but Caleb keeps deleting the comments.Yeah, and I had to switch to comment moderation for a while so I don't have to keep doing so.

This blog doesn't exist to provide you with a forum to be belligerent. You've said your piece and Busiek responded repeatedly, so how about we just move on, huh?

If you've got something else to say that you think is extremely important and feel I'm somehow preventing you from doing so, feel free to start your own blog and just go nuts on it.

But hey, it's your blog.

Sorry to be the occasion of hassle, Caleb!

So, just me then?