Trawling the Internet for articles to link to in my link-blogging feature at Blog@ the other day, I cam across this School Library Journal article that highlights a few of the fresh comics faces whose work for younger readers received Eisner nominations.

One of them was a Ms. Eleanor Davis, whose book Stinky (Raw Junior) was nominated in the “Best Publication for Kids” (Which looks like a particularly competitive category; Andi Watson’s Princess at Mighnight, Akira Toryiama’s Cowa! and Tiny Titans are also in the running).

I had not heard of Stinky until the nominations were announced (In fact, after the original announcement that Francoise Mouly would be doing a kids line of books, I hadn’t heard hardly anything about any of the Raw Junior “toon books”. A fact which leads me to believe that whoever is selling the things really oughta sell ‘em a little harder, and/or the rest of the comics blogsphere echo chamber should pay a little more attention to them, because that tends to be how I hear about a lot of books that I don’t hear about from the publisher’s or through publishing industry publications).

But then, that’s one of the good things about the Eisners. If their judges think a book is worth consideration for the award, with few exceptions it is probably a pretty good book, or at least a book I ought to read. So, having just read Otto’s Orange Day, I placed a reserve on Stinky at my local library.

Like Otto’s Orange Day, Stinky is a nicely designed book. Mouly and Jonathan Bennett share a design credit for it again, and apparently the entire line is designed with a unified look. I imagine they will look quite nice all lined up next to one another on a kid’s book shelf.

Stinky is the story of Stinky, a kid-sized swamp monster who is rather aptly named. He eats onions constantly, emanates stink lines and flies with visible dotted-line flight patterns, and his best friend is a huge, repulsive, equally smelly toad named Wartbelly. 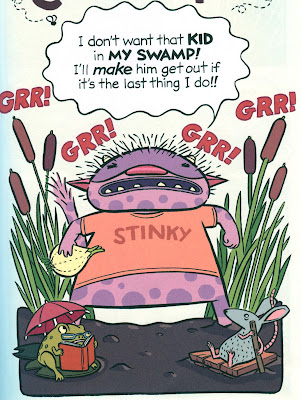 As with Otto’s Orange Day, this is a very simple story, divided into three chapters: One that introduces the characters and a conflict, a second in which the conflict escalates and a third in which there’s a resolution and a lesson learned.

In the first chapter we meet Stinky and follow him on what starts like a normal day—brushing his teeth with a stick and a tube marked “Crust,” breakfasting on a pickled onion, taking Wartbelly for a wagon ride through the muddy swamp, right up to the edge of town, where he gets skittish.

See, he hates kids, since they hate gross things and like non-gross things. So he’s extremely unhappy to see that a kid, who goes by the name Nick, has just built himself a treehouse at the edge of the swamp.

Stinky tries a variety of plans to drive Nick away once and for all (including hiding his hammer in the alligator-infested heart of the swamp), but Nick keeps embracing the various gross, stinky and scary things Stinky throws at him.

Ultimately, Stinky learns that kids aren’t as horrible as he thought, and, in fact, Nick at least seems to be a lot like Stinky.

It’s constructed elegantly enough, and Davis’ dialogue sounds natural without ever being too obvious.

Being a grown-up, it was the art that I took the most pleasure in. The image above probably gives a pretty good idea of Davis’ flat, simple character design and her big, thick lines, but what I liked best about her work here was the level of detail she packed into the panels.

Not necessarily in the style—it never gets crowded with lines or anything—but in how much she puts in the panels.

The page is a splash of Stinky’s bedroom, for example, and it’s jam-packed with leaves, rocks, mushrooms and jars of pickled produce. Bats hang from the ceiling, cockroaches sleep with manga sleep-bubbles swelling from their noses, a cloud of flies hovers above Wartbelly, a spider hangs on a web above them, a little knife and fork in two of its arms, and a bluebird sits smiling on the window sill, a clothespin over its beak to block out the smell.

Davis similarly fills most of the panels with little animals in the margins. Rats play cards o his floor, a spider knits a sock with a ball of yarn in a tree branch, a mole parent reads a book to baby moles in an easy chair in their burrow. I love looking at the pages and hunting out the details, and I assume they would make this a great book to be read to for kids, as there’s so much to keep little eyes busy while the readers handles the words for them.

It’s an all-ages book, in the best sense of the word.

Here’s a scan of the inside back cover, which is devoted to a map including all the locales Stinky and Nick pass through: 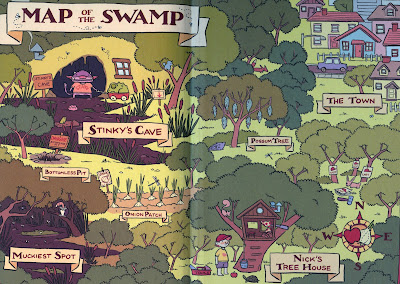 That possum tree really creeps me out.

This is a really thorough profile on the Toon Books line; I really liked the part where Mouly expressed her preference for just calling them “comics.” “They're great books,” she said, “but not novels.” Yeah. I know the ship on what we call these things has sailed, and “graphic novel” is the term we’re stuck with for now, but I do like just calling all comics “comics.” Stinky may be a hardcover and have a spine, but it’s more of a comic book than a “graphic novel” or “graphic novella” or “graphic book.”
Posted by Caleb at 7:01 PM

Oh, I thought you read my site. I've covered all three waves of Toon Books, the most recent here:
http://comicsworthreading.com/2009/03/30/toon-books-wave-3-luke-on-the-loose-the-big-no-no/

They are GREAT books for kids, and I love her determined use of the word "comics".

Huh. I do, and I thought I checked it about once a day, but I don't remember those posts. One was only a few weeks ago too, huh? I tend not to read reviews of books I think I might review in the near future, so maybe I saw it and ignored it.

Anyway, thanks for the link...those two are next on my Toon Books to-read list...

My daughter really liked the Stinky book being read to her. She's 3. I liked it, too.
She also liked the Silly Lily and the four seasons, but it was a little slow for me. Ha. The drawings were nice and she really did like it, so I would call it a success. I'll need to look at more of these.

Oh, I know that feeling, not wanting to read others' reviews. And I'm sure you have a TON of material to go through, I was just teasing.

Glad to hear Silly Lily worked for your daughter, Dan. That's one of the youngest-skewing books, I think.