Films about P. Craig Russell and Jeff Smith at the Wexner Center next month 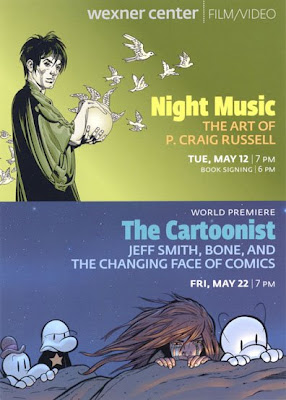 While it's true that Columbus, Ohio is no New York City, it's still a hell of a great comics city. In addition to the Cartoon Library and Museum at OSU, the Small Press and Alternative Comics Expo, Mid-Ohio Con, the Columbus College of Art and Design, an extremely active mini-comic and self-published comics scene, and a low-cost of living perfect for people in fields in which there's little money to be made, there's also the Wexner Center for the Arts, which I've mentioned here before in covering things like and the various Jeff Smith: Bone and Beyond related events last spring.

The Wex has a couple more cool-looking, comics-related events scheduled for next month.

On Tuesday, May 12, they'll be showing Night Music: The Art of P. Craig Russell, an 80-minute documentary about the artist by Wayne Alan Harold, and both the director and the artist will be on hand. Click here for more info, including a six-minute clip from the film, in which many of Russell's models introduce themselves.

Then on Friday, May 22, it's another event centering on the work of one of Columbus' favorite cartooning sons, Jeff Smith. Director Ken Mills will premiere The Cartoonist: Jeff Smith, Bone and the Changing Face of Comics, a 76-minute film about Smith "and his impact on the field during the past 20 years" created during last year's exhibit period. It contains interviews with Harvey Pekar, Terry Moore, Paul Pope and Scott McCloud. Again, both the director and the subject will be on hand for the event. For more info, click here.

(The images above are the Wex's postcards for the events, images of which I swiped from Smith's boneville.com blog).
Posted by Caleb at 8:52 AM