Brightest Day #24 (DC) Overall, I quite enjoyed Brightest Day as a series, and I bought and read all 24 of its issues. At no point did my enthusiasm for the series dip; sure, there were some issues I was less interested in than others depending on the amount of page-space given to which storyline, but over all I was always excited to read the next issues.

I know DC seems reluctant to try the same thing twice when it comes to their weekly and weekly-ish comics series, but this one they got completely right, and this is the model to emulate—a pair of writers working in concert, a different art team for each story segment ensuring a basic level of quality, every other weekly shipping apparently also helping keep the art looking nice (Compare Brightest Day visually to Generation Lost, which had different artists rotate issue by issue, and I think the superiority of Brightest Day particular artists for particular storyline’s will seem superior).

There were, of course, problems, and, in retrospect, the biggest seems to be the complete lack of foreshadowing of the big event at the end of this series, the return of the dude on the cover to the DCU (Plus John Constantine, which is kind of depressing—Hellblazer is DC’s longest-running comic book series after Action, Detective, Superman and Batman and is clearly working, why risk screwing it up like this?)

I don’t think the series did a good enough job of justifying the resurrections of Jade, Max Lord, Reverse Flash or Osiris, either; they did little more than cameo throughout the entire 24 issues.

But as for this issue? I thought it was a fairly satisfying conclusion, despite its reliance on decades-old Swamp Thing continuity, and the weird implications that come from Geoff Johns’ favorite characters re-creating the pre-“Anatomy Lesson” version of Swamp Thing to kill off Alan Moore’s version; as subconscious rebuttal or intentional homage, it’s a bizarre aspect of the story.

Also disappointing was the resolution of Deadman’s storyline, which deposits him right back where he was at the beginning, with a teensy tiny change. Other characters have been changed somewhat by the events of the story, however, and there’s a series of character-specific epilogues, some of which read like cliffhangers and promist more to come (Martian Manhunter and, perhaps, Hawkman get rather open-ended epilogues, whereas Firestorm and Aquaman get ones that are merely missing “To Be Continued in…” next issue boxes).

As a fan of some of these characters, I think it’s sort of unfortunate that DC doesn’t seem poised to capitalize on the momentum of this series in anyway that’s tangible right now. Sure, there’s Brightest Day Aftermath: The Search For Swamp Thing, which will presumably star Constantine and Swampy with plenty of guest-stars already on the schedule, and an Aquaman title by Geoff Johns and Ivan Reis has been announced but not scheduled, but what’s next for Firestorm? For J’onn J’onnz? For Hawkman? Where do they go now?

DC’s next big event is “Flashpoint,” which, as an alternate reality story, seems like sort of an interruption, but perhaps that works out best—it allows the publisher to stall announcing, say, a new Justice League title starring The Big Seven and Firestorm until after Brightest Day was all wrapped up. Still, I wonder if the delay will result in an enthusiasm fans feel at the end of this series from simply fizzling.

I suppose it’s worth noting that this issue is 38 pages long, but has five single-page splashes and two double-page splashes (the latter of which follow back-to-back, blunting the impact of both). By page count, it’s just about double-sized, but by panel count? Not so much.

At any rate, congratulations to the creators and to DC for delivering a consistently entertaining bi-weekly series. In the future, I hope we get more like this one, rather than like Countdown or Generation Lost or DC Universe Online Legends.

DC Comics Presents: Night Force #1 (DC) This almost-trade collects the first four issues of the Marv Wolfman and Gene Colan’s short-lived 1982 horror series, and it’s a somewhat curious time to release it, given the relative obscurity of the characters and concept and their place in the DCU these days, but why say no to a chance to see more Gene Colan art?

It’s not terribly well served by the rather garish coloring (this is one of many old comics that would actually be better served by a black and white Essential/Showcase Presents format), and DC doesn’t seem to have done much pre-production work to get it into this format, and yes, I imagine once could find these four issues for less than $8 with some rigorous back-issue bin spelunking.

But I don’t have time for that, nor that much interest in the concept, so I welcomed the release in this format.

The storyline is no great shakes; Wolfman’s scripting is pretty melodramatic, and even pretty purple, but that is certainly part of the pulpy, faux-Gothic charm of the whole affair, as is the soap opera adult tone (This is a serious story taken seriously by the creators; it’s not for kids but told in a similar fashion to other DC comics from the era that were, and it’s not as hysterically over-the-top as the publisher’s current attempts at adult content).

The volume ends with two of the leads still intent on the rescue of young imperiled girl, so I have to assume future volumes are forthcoming. Five more oughta collect the entire original run of the series, and I guess there was a 12-issue revival in 1996, although that one was sans Colan and thus may not be of interest to whoever it was that thought they oughta collect this now.

DC Universe Online Legends #6 (DC) I was pretty disappointed to see Lex Luthor, Black Canary and The Atom all don Sinestro Corps rings and access their yellow light energy powers here, and not get neat-o Yellow Lantern costume redesigns. Half, maybe three-quarters of the fun of all those various Lantern rings constantly changing hands in the DCU is seeing artists and colorists whip up new costumes for the characters who put them on.

Instead, Luthor and company simply get yellow auras. 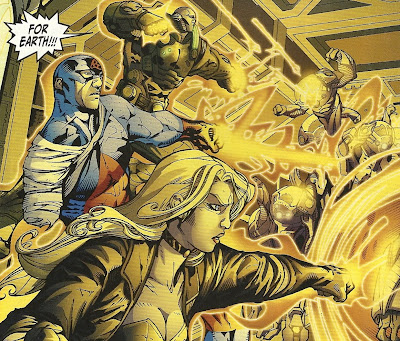 I have enough affection for the characters and curiosity about the game I’ll never actually play to want to keep reading this, but it seems pretty crazy to drop $6 a month on something of such poor quality for a year or so. Maybe I’ll wait two years and borrow the trades from a library to sate my curiosity…

Green Lantern #65 (DC) Well I’ve already complained about Indigo Lantern John Stewart’s costume, Tucker Stone already made fun of the fact that it takes five people to ink a monthly Green Lantern comic and the gay jokes (By the way, what issue is that Guy Gardner “So we can get this party started” panel Tucker ran from? Because I kind of want to read the whole comic just to see that single panel in context and see if that makes it slightly less pornographic) and Don MacPherson already noted almost a third of the 20-page book is devoted to splash or “splashy” pages. What else is there left to say?

Admittedly not much. I was relieved that I didn’t have much trouble following the comic despite the fact that I missed two parts of the story arc—this “War of The Green Lanterns” story is running through all three GL books, but I only subscribe to one of them—and Doug Mahnke remains one of DC’s best artists, even if something is clearly broken in the book’s production process when they need three to five guys inking each issue for this long now.

John’s get-up aside, it was fun seeing the four Green Lanterns try on new rings and colors, and it was fun to see the four of them in the same story again for the first time in what seems like way too long—I thought John Stewart was going to be Hal’s partner as the second Green Lantern of their space sector (although a bit of dialogue in here makes me wonder if John and Guy didn’t switch sectors in one of the sattelite books), but I can’t remember the last time I saw Hal and John in the same panel.

The book read awfully quickly though, and was ultimately quite inconsequential—all of the events that take place within this issue are successfully implied by the cover of the next chapter of the storyline—which makes all those splash pages a little galling. There’s a house ad in this issue for the storyline, including a check-list of eleven comics. If all of the chapters are as short and breezy as this, then I wonder if this isn’t really a six-issue story being stretched out.


Tiny Titans #39 (DC) This is the “Pink” issue of Tiny Titans, and typical of Art Baltazar and Franco’s work on the title, it manages to find humor in references from as far afield as the 1978 Superman movie and recent Smallville episodes and working them into a gag-driven story that supplies all readers big or small will need to “get” the jokes.

In this issue, Alfred and the penguins are doing the Bat-Family’s laundry and the Super-Family’s laundry, and apparently when you mix the super-red red capes with other clothes, it turns everything pink.

So every member of both families have new, pink costumes this issue.

That’s every member of the Super-Family

and every member of the Bat-Family

(By the way, is it just me, or is Batman like eight feet tall in that panel?).

Here she is trying to scare Alfred with scary rays in order to avoid having her costume washed: 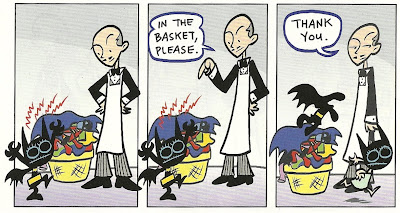 In conclusion, Tiny Titans remains the best thing ever.
Posted by Caleb at 8:18 PM

Pink Batman is just so delightful. I don't know why he's so upset, he wore that zebra outfit and the rainbow one, and didn't complain.

The...er..."interesting" shot of Guy Gardner that you are asking about took place in Green Lantern:Emerald Warriors #8, just prior to this issue, and it has Guy waiting for Hal, and then they beat each other up for a while. But in a VERY manly sort of way.

Aki Alaraatikka said...
This comment has been removed by the author.
7:24 AM

SallyP is right about the location of that panel, but just to clarify: there's no context or reason for that shot whatsoever beyond what you see. He takes a draught off a frost phallus, that's it.

There's a hardcover collection of the whole Wolfman/Colan Night Force series listed on Amazon, so I assume this DCCP issue is being treated as a preview/teaser for the more expensive collection...