Some thoughts on Feeding Ground...and on various depctions of werewolves

I didn’t really like the first issue of Feeding Ground, a still in-progress six-issue series from Archaia by Swifty Lang, Michael Lapinski and Chris Mangun*. That was the only issue I really tried to review here, and, as I said at the time, the book has its attributes—it’s a great value ($3.95 for an ad-free, 29-page story, which repeats in Spanish, forming the second half of a flip-book, for 58-pages total), it has really weird art, it’s unlike many of its fellow direct market comics and always boasts very striking covers.

Archaia has been sending me reviews copies of each succeeding issues—the fourth of six being the last to come out—and I keep reading them with interest, although I’m afraid my esteem for the series hasn’t increased any.

It’s very confusing, the art makes me uncomfortable in its degree of reference and little about either it or the verbal aspects of the story are very well communicated.

It wasn’t until somewhere in the second issue that I realized this is a sort of werewolf story, for example, something you’d probably want to get out there somewhere in your first issue.

Part of me thinks that Feeding Ground will be much easier to follow and thus enjoy when its all collected, and each chapter follows immediately on the heels of the previous one, so there aren’t weeks to forget what little I poorly understood between installments, but then, as I stated above, the packaging itself is kind of fun, and that aspect would be lost in the trade (although clarity is probably more important than packaging).

Here’s a pretty good example from what’s wrong, what’s right and what’s weird about the story, from issue #4, the one with this swell piñata cover: 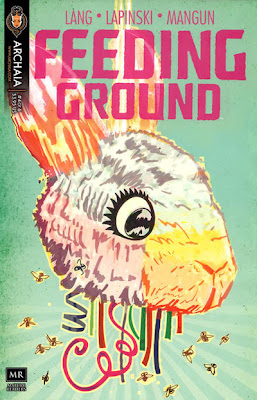 This is a two-page sequence from the climax of the book. To set it up, the man in the hat is seeking to protect the little girl in his arms. The pair of them and her family were first ambushed by border guards, and then by werewolves: 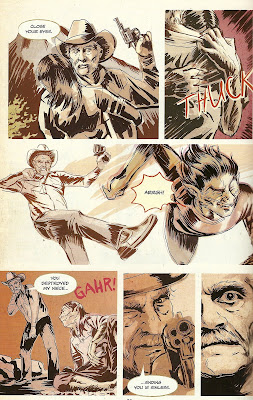 See the first panel on page two? Yeah. What the hell happened there, exactly? Is the knife coming out of his chest, hilt first? Was it thrown into his chest? Did it appear there? Is it “real”? Is it subjective reality? Is it how he feels? Is the girl wolf hissing in reaction to the image, or did her hiss cause it?

I have no idea. And that’s kind of cool and exciting, and it’s definitely a nice-looking panel, but even still, that’s a lot of questions for a panel to suggest and not offer any answers for.

Here’s something I really liked about the book. I mentioned how awesome the cover is already, but look closely at the little winged insects on the bottom of the page; I think they’re supposed to be bees.

I love how they’re drawn, like little signatures in the shapes of bees. I wish that sort of spontaneity and live was evidenced in more of the interior art.

One think I don’t really like about the book is the way the werewolves are drawn. This is from an early scene in Feeding Ground #4: 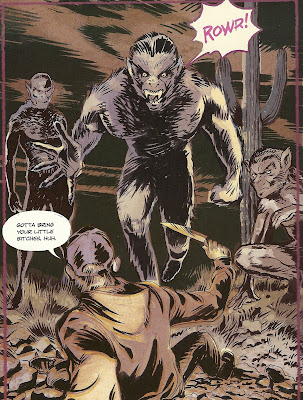 Lapinksi creates a much more interesting monster in Feeding Ground #3, when he draws a failed werewolf that didn't quite take: 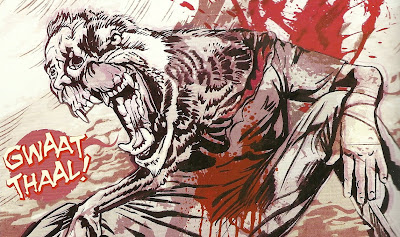 Not much of a werewolf, obviously, but a pretty great, scary image, and some wonderful dialogue, too!

Have you ever thought much about werewolves, how they would look in real life, how they should look, and how you personally like them to look?

I think about that subject an awful lot. Pretty much every time I see a movie or read a comic book with a werewolf in it, which is fairly often, considering.

These werewolves are of the original, 1941 The Wolf Man variety, basically just hairy humans with sharper edges here and there (If you look close, I guess these are a bit removed from the heavily made-up Lon Chaney Jr. version, as they have little muzzles that give them a slightly baboon-like appearance).

I don’t like that sort of werewolf, and not even the impressive version of it in the 2010 not-really remake The Wolfman (which I just happened to watch a few weeks ago), a version which ran about on all fours as easily as it walked on two legs and had long fingernails capable of knocking dudes’ heads around like volleyballs really sold that version of a wolf man to me.

I prefer my werewolves with wolf-like heads—long pointed muzzle, and long pointy ears near the top of their heads. Troubled 2005 release Cursed** or, better still, 2002’s Dog Soldiers are pretty good examples of wolf-headed wolf-men style werewolves (actually, I think Dog Soldiers had one of my favorite designs for a movie werewolf…their height and skinny bodies and limbs really added to the alien, off-putting horror of the monsters). 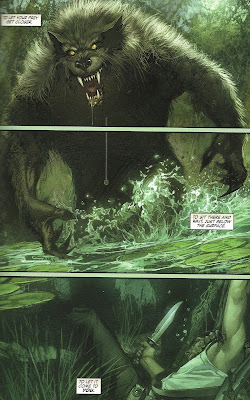 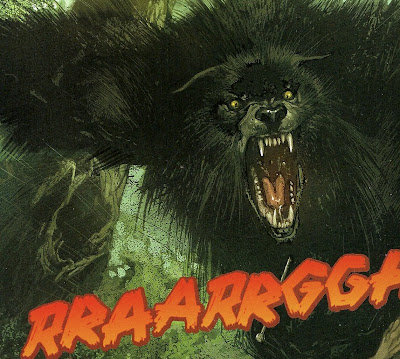 The thing about those sorts of werewolves, however, is that they never seem quite right to me—like, even accepting the man-who-turns-into-a-magical-wolf-monster, for some reason the wolf/human hybrid look is just a inch too far for me to really embrace. Basically, they tend to seem very ape-like to me, particularly in film, and that’s an entirely different mammal, you know?

I guess it’s a byproduct of having been born and raised so long after Darwin, but bestial humans seem like they should be ape-like to me, rather than wolf-like. Part of this too may simply be because of the limitations of special effects that Hollywood dealt with for so many decades—as long as they wanted to have an actor under werewolf make-up, it was pretty hard to come up with anything that didn’t look a little like something somewhere in the spectrum between a petite-footed Bigfoot and a gorilla with pointed snout and teeth.

So werewolves that seem the most “right” to me are simply monstrous wolves that display human intelligence.

Like, a man that turns into a wolf isn’t that scary—a wolf could totally kick my ass in a fight, after all, but if I had a gun or a stick or was near a car I could climb on top of, I probably wouldn’t faint in horror or anything. A wolf’s not a bear or a tiger. So, it would have to be a man that turns into a really, really big wolf.

In movies, I think the best werewolves I’ve seen are, according to my own personal werewolf aesthetic tastes are the ones in the Twilight movies (I’ve only seen part of the second film, but those seemed like big, bear-sized werewolves) and the just-released Red Riding Hood, which was a huge, black, fast, nimble, cunning wolf.

My ideal werewolf design, if any one cares, would be a wolf the size of a horse, with something of a mane, and big paws like a bear’s paws, which would be able to manipulate some objects, without giving the beast the ability to, like, play piano or shoot a pistol. Also, like a bear, it would be able to stand. That would be a scary fucking werewolf. And one I could believe in as a super-scary, monster wolf that would legitimately threaten people in our post-scared-of wolves society.

I think werewolves that are just wolves that can talk and walk around on their hind legs would be scary as hell too, I guess. Like a whole pack of normal, regular-sized wolves, all running around on their weird, backward-kneed canine legs, their forepaws held in front of ‘em like kangaroo hands, crowding around you and snapping at you? That would be some freaky shit.

I haven’t seen either of these (personal) ideal werewolves in films yet. I think the scariest wolf I’ve ever seen in a movie wasn’t actually a werewolf, but the wolf Gmork in The Never-Ending Story, but that may have had something to do with me being seven-years-old when I saw him for the first time.

As for my favorite werewolf design that I have seen somewhere other than in the back of my head while I’m half-watching horror movies, I think that would probably be this one: 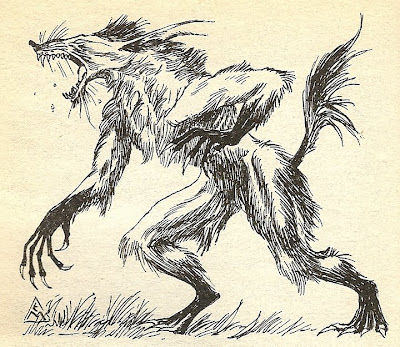 It’s definitely of the human/wolf hybrid variety, but I really like how inhuman it is—with the exception of the torso and maybe parts of the hips and shoulders, there’s no part that you could really isolate as belong to a human being.

It would be fairly difficult to put that particular wolf in a movie and have a man inside it…unless maybe the actor’s head would be somewhere in the middle of the neck/mane area, with an animatronic werewolf head on top of the actor’s head, and they could do something with puppetry and CGI on the legs, maybe digitally erasing the actor’s human legs….?

The source of that image is a rather unlikely one, by the way. It’s a drawing by Ellisa Martin which was used to illustrated Narnia Solo Games #4, The Lost Crowns of Cair Paravel. These were something between a Choose Your Own Adventure book and a role-playing game for someone with no friends with whom to play. They were in the shape and form of slim paperback books, and were essentially playable prose novels written in second person, set in the world of C.S. Lewis’ Narnia series.

I only had two of this series, and it’s that drawing of a werewolf that I remember most clearly about them. Flipping through the yellowed copies, I see they were copyrighted 1988, which would have made me 11 at the time of purchase. I see also that they were only $2.95 a piece—less than the cheapest 22-page comic books you can buy today!

*Mangun is a great name

**Have you already seen Cursed, and think you’ve wrung all the enjoyment out of it there is to wring out? Well, try watching it again now in 2011, only pretend that Christina Ricci and Jesse Eisenberg are Elizabeth Wurtzel and Mark Zuckerburg, respectfully. Wurtzel and Zuckerberg vs. werewolves is an entirely different movie
Posted by Caleb at 7:10 PM

You should TOTALLY draw a picture of your ideal werewolf desing, and post it to EDILW.

Have you seen Wrightson's "Cycle of the werewolf stuff?