5 Ronin #4-#5 (Marvel Entertainment) I previously wrote about the first three issues of this neat weekly miniseries by Peter Milligan at Blog@. These are the two concluding chapters, featuring original characters kinda sorta inspired by/reverse-engineered and retrofit into the samurai genre modern Marvel characters Psylocke and Deadpool.

The Psylocke book features amazing art by Goran Parlov, and is probably worth the purchase simply to read Parlov’s art. The story is, however, kind of icky—which I suppose is in keeping with the setting but that doesn’t really make it all that fun to read.

The Pyslocke character is actually half-English, half-Japanese young woman who calls herself Butterfly and works as a prostitute. Like the three previous ronin, who actually were ronin, she and her family were wronged by the Daimyo, and she seeks revenge.

Her plan is this: She will be the best prostitute she can possibly be, until she’s so good the Daimyo himself sends for her, in order to have sex with her, and then she’ll kill him.

Like the previous issues, this one strips all trace of superpowers out of the proceedings, but gives the lead character an ability somehow reminiscent of one her namesake had. This woman isn’t psychic, but has grown so adept at reading body language and behavior that she can usually tell what a man is thinking, and how to get him to do what she wants.

Unlike the previous issues, the wise fool character what is presumably going to end up being the Deadpool-derived character is absent, which seems a strange omission, as for three of the first four issues he appeared, nudging warriors toward confronting the Daimyo. Instead, the Wolverine character shows up, and he has sex with the Psylocke character, which leads to a page in which Butterfly narrates about the Wolverine ronin’s love-making abilities which, uh, isn’t something I really wanted to read (Here, I’ll share: “He is not without skill himself. Though his love-making is unpolished. More suited to the roadside than the parlor.”

The final issue, the one with “Deadpool” on the cover, is a bit of a disappointment. Not that it’s not fairly well written and not that Leandro Fernandez’s art is anything less than great, it’s just an odd, deflating sort of conclusion to the series. For four issues, we’ve seen a mysterious, scarred fool character seeking out powerful ronin and urging them to attack the daimyo through subtle means, and met a woman with her own plans for kill the daimyo.

The other four ronin all appear in the book, but only in an epilogue appearance sort of fashion, declaring what they will do now that the Daimyo is dead.

All in all, it was a really great showcase for a lot of great artists, and a rather interesting creative writing exercise to watch a skilled writer like Peter Milligan engage in.

If you’ve any affection for the samurai genre at all, I’d recommend picking up an issue or two here or there (One need not real all five, or any in any particular order; they’re all stand-alone stories…more so, it turns out, than even the structure of the earlier issues might have hinted).

Green Lantern #64 (DC Comics) Tucker Stone quite thoroughly reviewed this particular issue on Savage Critics earlier this week, and I liked the piece so much that I feel disinclined to write much about the comic book myself beyond noting that you should probably go read Tucker’s piece (That is the exact reason why, when I was working as a film critic, I never ever read reviews of anything until after I had filed my own story, and why I avoid reviews of comics I’m going to be reviewing professionally—but hell, this is just Green Lantern #64).

Of greatest import is, I suppose, that the regular art team of pencil artist Dough Mahnke and his running crew of inkers are back after a month/issue off, so Green Lantern is back to looking top-notch once again.

It’s probably also worth noting (again) that writer Geoff Johns really, really, really needs to cut down on splash panels, and try to work in some six to nine panel grids, because this comic takes about a minute and a half to read. There are two (2) two-page splash spreads, a one-page splash (so, that’s almost a fifth of the book devoted to just to just three panels), and two other pages have only two panels on them—big, splash-sized panels and small, horizontal panels along the bottom.

Mahnke’s a hell of an artist, and the book is well drawn and brilliant in its glowing colors, but the splashes all seem like wasted real estate, not really revealing anything of note. For example, two whole pages are drawn showing Salaak and some other Green Lanterns flying in space, and then the one-page splash is wasted on showing them arriving. Three pages to say “Salaak and some Green Lanterns are off to arrest Hal Jordan for sucking”…?

The other two-page splash is devoted to reveling that Krona has control of The Entities, which we’ve already seen in previous issues.

If you’re just reading for the plot summary, this is the paragraph for you! Hal Jordan and the “New Guardians” (the otherly-colored Lanterns) find Krona’s copy of Kramer’s Ergot #7, out of which pops “The story vampire, Lyssa Drak!” (Congratulations Johns; that is an awesome phrase). The book eats everyone except Hal Jordan, who escapes by terrorist fist-jabbing Sinestro, which naturally causes an explosion. On Oa, Krona stuffs The Entities into The Old Guardians and puts Parallax into the main power battery, which for some reason I don’t understand turns the Green Lanterns’ eyes yellow and makes them hate Hal Jordan more than usual. I think Parallax or Krona is somehow controlling all of the Lanterns who aren’t Hal Jordan…? Not sure how that works, since we’ve spent years learning about how yellow and Parallax are fear, and what does fear have to do with mind-control?

You can read the next issues of Green Lantern Corps and Green Lantern: Emerald Warriors to find out! Or, like me, you can not! I don’t care! (Hopefully Tucker reads and reviews ‘em though; maybe then I’ll know what the hell is going on when Green Lantern #65, part four of this inter-book crossover story, shows up in my pull-file.

Oh, Ivan Reis’ cover featuring a bunch of GL’s fighting one another is worth a close look, as it show’s just how hardcore the “War of the Green Lanterns” is going to be.

For example, John Stewart isn’t just gonna fight Kyle Rayner, he’s going to ring-magic up a green pistol, with which to shoot Kyle’s girlfriend with!

The Green Lantern Who Is Also a Giant Jellyfish is going to attempt something unsavory with Arissa!

Salaak is going to tear his shirt off! 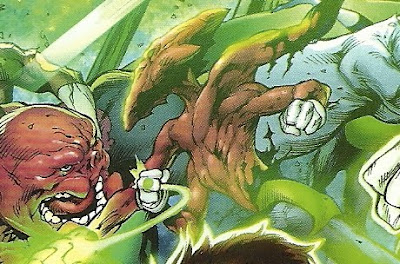 And a space cricket is going to backhand Bd’g, who is the space squirrel replacement for Ch’p! 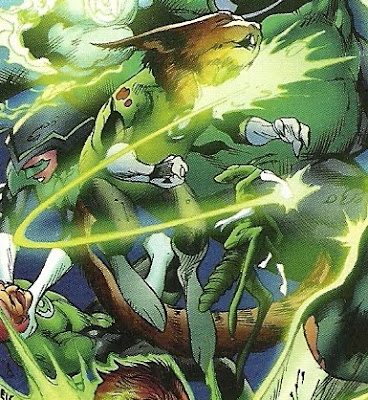 Jimmy Olsen #1 (DC) This is where I would normally write a couple hundred words about this comic book, but I’ve already talked about it at probably too great length over at Blog@, so if you would like to read my babbling on and on about how good Nick Spencer, RB Silva and company’s Jimmy Olsen is, I’d recommend you visit Blog@ and read it there, if you haven’t already.

Namor: The First Mutant #8 (Marvel) For two issues now, I’ve been complaining about Ariel Olivetti’s art on this series, so you would think I’d be happy when the third and final issue of the “Namor Goes To Hell” story arc comes out sans Olivetti, right?

I would think that. Unfortunately, I thought wrong. This issue, while not drawn/photo-collaged by Olivetti, is illustrated by three different pencil artists and three different inkers, with Antonio Fuso inking his own art. That’s a grand total of five artists on these 22 pages, with a sixth artist (Olivetti) handling the previous chapters.

So this story arc that looked like hell now looks like late, rushed hell that changes art styles on a regular basis every few pages in the final chapter.

Suart Moore’s story might be much more engaging than it looks, but it’s really hard to divorce a comic script completely from comic art. I suppose it’s worth noting that Moore is taking “The First Mutant” part of the title, and the X-Men franchise’s adoption of Namor over the last few years, to heart. This has read an awful lot like a Namor book and an X-person book, with X-characters showing up throughout and, in this issue, Cyclops showing up in Atlantis to argue with Namor about the sorts of things Cyclops and Namor probably argue about a lot.
Posted by Caleb at 10:58 AM