"Don'tcha mean special freight?" Pops asks, setting up the visual pun in the panel above. Does that particular rendition of that Frankenstein's monster look familiar? The appearance of his nose high above his eyeballs certainly calls to mind Dick Briefer's strikingly idiosyncratic version of the monster in his Frankenstein comics. 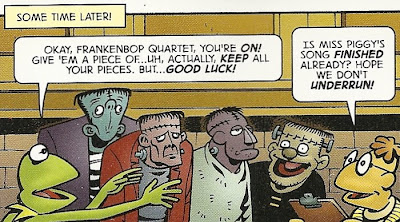