Man-Thing—created by Stan Lee, who came up with the name, and Roy Thomas, Gerry Conway and Gray Morrow—has the earlier cover date, which would seemingly make Swamp Thing the imitator, although complicating things a bit was the fact that one of Man-Thing's creators, Conway, was living with one of Swamp Thing's creators, Len Wein, at the time. Wein also wrote Man-Thing stories in the early'70s.

Despite the many similarities, the fact that the two characters came out almost simultaneously has generally been regarded by people who care to think of such things as just one of those weird coincidences that occasionally occur when you have two rival comic book companies who share a city, talent pool and audience. (The other most prominent example is probably Marvel and DC's dueling teams of outsider superheroes lead by middle-aged men in wheelchairs, The Doom Patrol and The X-Men, which debuted three months apart in 1963).

I've recently been working my way through Showcase Presents: Justice League America Vol. 5, and had just arrived at JLoA #91, which contains this panel: 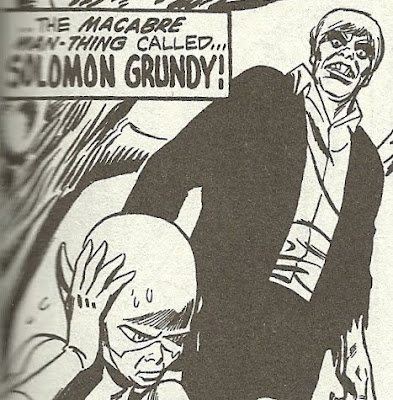 Forgive the poor scan (The Showcase Presents line is full of great blog fodder, but very, very difficult to scan images from if they fall too close to the middle of the book). As you can hopefully make out, the narration box refers to Solomon Grundy as "The Macabre Man-Thing."

Writer Mike Friedrich is quite enamored of the expression, using it over and over during the course of the two-part story that begins in JLoA #91 and continues into JLoA #92. 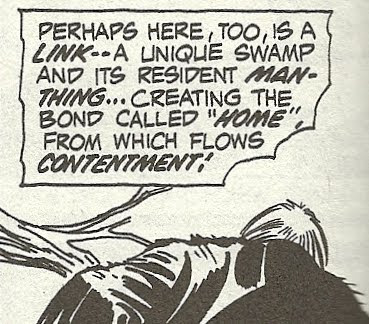 In fact, I counted five references to Grundy as a "Man-Thing" in Friedrich's narration (followed up by "Marshland Monster" and "Swampland Savage").

These two issues were cover-dated August and September of 1971, mere months after Man-Thing appeared in a Marvel comic, although JLoA writers have been referring to Grundy as a "Man-Thing" for years prior (Also of interest: Friedrich dedicated his two-part story to Roy Thomas, who, as we already mentioned, helped create Man-Thing, although Friedrich's dedication was for introducing him to the Golden Age JSA characters, and thus not swamp monster related). Here's a panel from a collection reprinting the Gardner Fox-written "Crisis Between Earth-One and Earth-Two!" that was originally published in 1966's JLoA #46 and #47 (which I discussed at some length here): 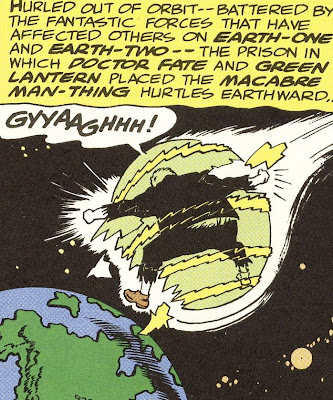 That's Fox calling Solomon Grundy "The Macabre Man-Thing" some five years before Marvel's Man-Thing appeared in Savage Tales. Did Stan Lee steal, or unknowingly appropriate, the nickname of a DC swamp monster to give to a brand new Marvel swamp monster?

Maybe...but probably not. A Marvel's 1960-published Tales of Suspense #7 featured a story called "I Fought The Molten Man-Thing!," which was also the cover feature: 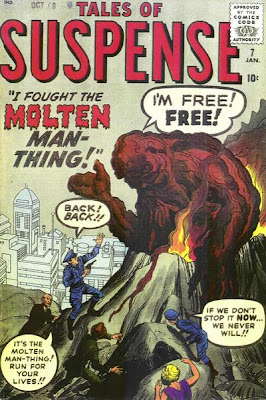 Jack Kirby drew that particular story, and Stan Lee edited that comic, and thus might have written or dialogued that story. So maybe Stan Lee borrowed the name from himself...or from Kirby...? But let's not get into that here. Anyway, that's as far back as I can trace the etymology of the name "Man-Thing."

Speaking of Marvel and Showcase Presents: Justice League of America Vol. 5, it was interesting to come across this panel 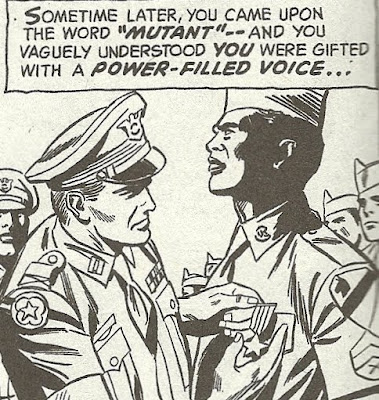 in a DC comic. It's from JLoA #95, which contained the story "The Private War of Johnny Dune!" (Also written by Friedrich, and, like the black and white Grundy panels above, drawn by Dick Dillin and Joe Giella).

Johnny Dune is a Vietnam vet turned protest singer with the ability to control people with his voice. Where did he get this miraculous super-power? He was apparently born with it. He was a mutant.

Mutants are, of course, Marvel's thing, and though there are mutants in the DCU, and one does see the word used to refer to characters here and there throughout DCU history, this is a pretty rare example of a Marvel-like mutant. That is, an otherwise normal-looking person getting a super-power during a time of stress basically for no reason other than possibly genetics. Super powers in the DC Universe generally require an origin of some sort.

Justice League of America #91-#92 is of interest for more reasons than the number of times their writer called Solomon Grundy "Man-Thing." They're also the story in which Robin Dick Grayson gets a new costume from his older, extra-dimensional counterpart that none of the readers seem to like very much.

Those issues were one of the annual JLA/JSA crossovers, in which the Justice Leaguers of Earth-1 (i.e. the "real" DC Universe of the time, where the majority of the line was set) and the Justice Society members of Earth-2 (a parallel universe where the Golden Age characters lived). The JSA brought along their Robin this time, and he meets up with his Earth-1 counterpart, who has torn his uniform. 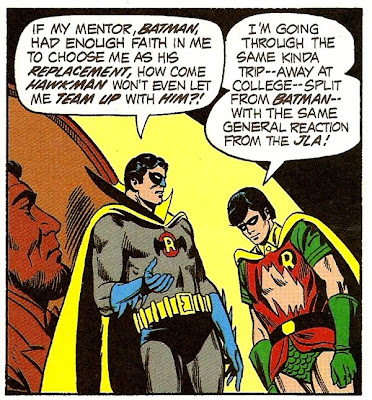 Luckily, he has a spare: 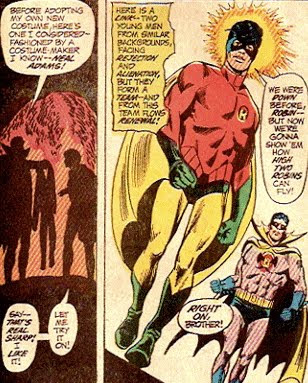 but I guess readers didn't. Near the end of the story, Robin thinks to himself, "Well, back to my interrupted case--and my original uniform! Funny thing, though--I kinda like this one--I just may keep it!"

A narration box at the bottom of the same panel asks, "What do you think, readers? Would you like Robin to switch to this new costume? Write us--Let us know!"

I assume few wrote in to say he should keep it, as this is the only time I've seen the costume. It looks better in black and white than in color, I think, but I don't care for the Gambit-like mask-thing. Interesting to see the ways in which it presages some of the Nightwing costumes he'd wear years later, especially in the gliding feature.

Finally, here's a splash panel from the first page of JLoA #94, one of the several pages in it drawn by Neal Adams: 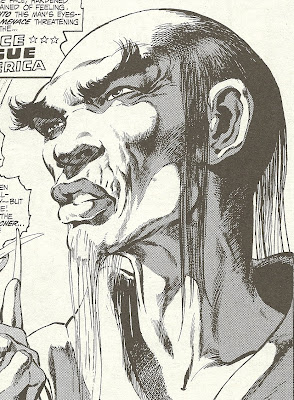 The narration begins like this: "A simple man...a simple face."

Man, that face is many things, but simple it is not.
Posted by Caleb at 11:34 AM

I'd heard that both Wein and Thomas were inspired by an even earlier character, the Heap...

I always assumed that Conway and Wein were having a contest to see who could recreate the Heap better.

No mention of the Heap is complete without a reference to Kurtzman and Elder's wonderful story "Outer Sanctum": http://jeffoverturf.blogspot.com/2011/04/outer-sanctum-mad-mondays.html.