Action Comics Weekly #610: The one where Nancy Reagan gets called out 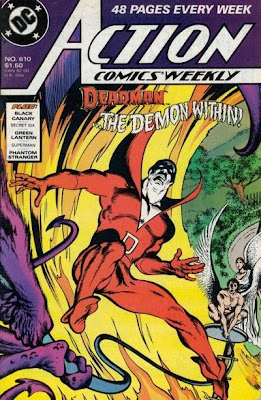 Having missed Action Comics Weekly #609, we join all six weekly features already in progress, although we probably won’t actually discuss all six of them, because most of them are boring and don’t involve Hal Jordan getting hit in the head or doing anything foolish.

But the first feature sure does!

It opens with Hal Jordan facing a sword-wielding maniac in the streets of Chicago, a sword-wielding maniac who just cut down a victim. Fearlessly, Jordan tosses his super-power ring onto the ground and decides to take on the swordsman with his bare hands. (I notice the drooling madman does have a yellow shirt on, however, so maybe Hal’s ring would have been powerless against him anyway…?) 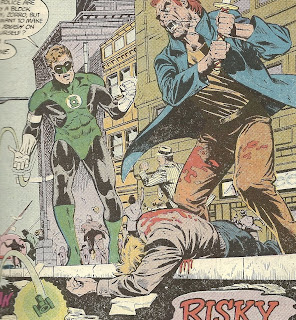 Jordan lands a devastating blow to the dude’s breadbasket, which unfortunately opens up the bullet wound in his arm (remember, he was shot a couple of issues ago, which was a couple of months ago in my ongoing coverage of this 23-year-old storyline).

Lucky for Hal, the crazy guy hits him with the wrong end of the sword:

Before he can deliver the coup de grace, Hal’s opponent seems scared and hesitant, allowing Hal time to think to himself that maybe he’s a little too fearless lately, and to kick the guy in the genitals.

Hal flies away, leaving the fellow to the arriving police officers, although he notices the swordsman seem to be shaking off his state of mind, “like he just woke up or something.”

From there, Hal flies off to the police department and attempts to get his very own Commissioner Gordon by comparing notes about what turned a normal guy into a sword-swinging lunatic with a Lieutenant Rensaleer. The latter’s not much of a detective. A letter arrives in the mail from a man calling himself “Mind Games” who takes responsibility for causing the man “to run wild with the sword” and threatening to “turn more citizens into homicidal maniacs” if he’s not given $500,000 by 6 p.m.

Rensaleer laughs at the guy and tosses the letter in a wastebasket. 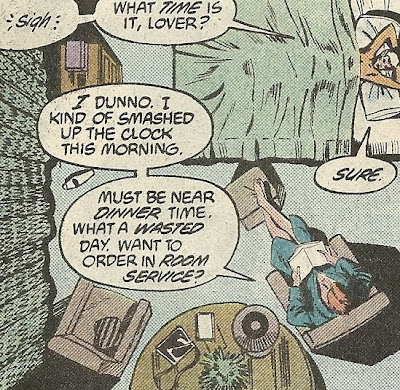 Back in his hotel room, Hal has sex with his teenage alien girlfriend and orders room service. The waiter, coincidentally, is the next person being driven into homicidal mania by mysterious circumstance and, because Peter David is scripting the Green Lantern feature at this point, Arisa’s dialogue sets up a visual pun for a cliffhanger. 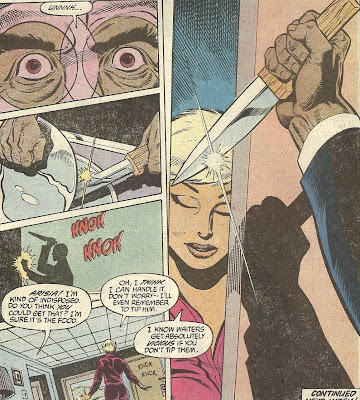 Green Lantern is followed by a Phantom Stranger short story written by Paul Kupperberg and drawn by Kyle Baker (credited as “artiste” instead of artist). The story involves a computer becoming possessed by a demon and, this being 1988, the technology and lingo are pretty dated, but it’s a great example of Baker’s already great—and certainly quite distinct—artwork.

Here are two badly-scanned, non-consecutive pages, just to give you an idea of what it looks like: 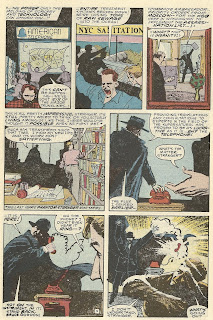 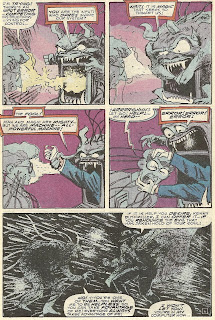 If reading these old comics from $1 bins is like panning for god, this is a fine nugget.

As exciting as the two opening stories were, even they are eclipsed by chapter ten of the Deadman feature, entitled “Catfight,” which opens thusly: 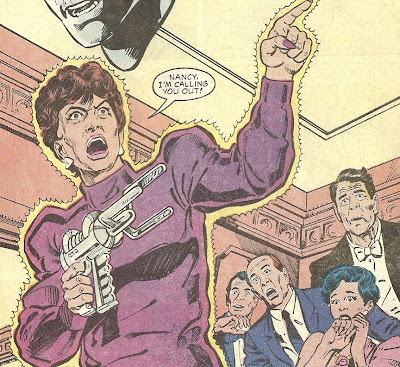 Nancy is, of course, First Lady Nancy Reagan, and that’s her husband cowering in the tuxedo in the background.

And the woman calling her out is Raisa Gorbachev, wife of Mikhail Gorbachev, although the yellow aura is our visual cue that she’s currently possessed by Deadman, the ghost hero who’s super power is possession.

Nancy is possessed by Satan (really!) and Deadman/Raisa is packing an “ancient astronaut's weapon” capable of hurting the devil.

While the husbands run interference, the spiritual entities eventually abandon their famous hosts, and end up parleying with Major Kasaba, from earlier in the storyline. 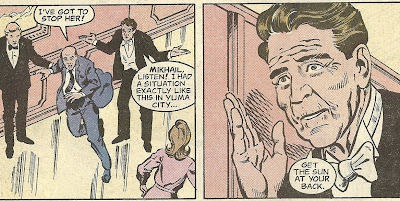 And then D.B. Cooper reappears to assure us that the creature calling itself Satan wasn’t really Satan, but a minor demon named Yakin, and that he is really the devil.

Oh shit, D.B. Cooper is Satan himself?! Or Satan is disguised as Cooper…or something?! I guess I’ll find out next week! Pretty exciting cliffhanger, though (I notice reading these two that the cliffhangers are all single-panel affairs. Either of these—D.B. Cooper revealing himself with a sly smile and the declaration “I’m his boss,” a knife poised to stab at an unaware Arisa—would be full-page splashes in a modern DC comic.

There’s two more pages of Roger Stern and Curt Swan’s boring-ass story about a Superman cult or somesuch, another boring installment of the boring Secret Six feature, which at least has some odd images as the Six infiltrate a meat processing plant— 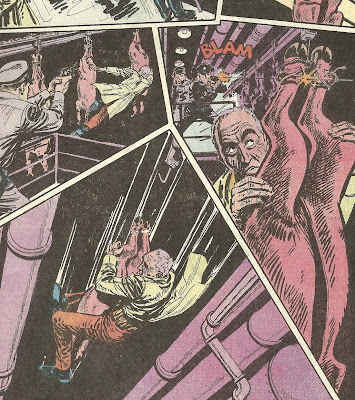 —and then it’s time for part two of “Bitter Fruit,” the new storyline featuring Black Canary, which began last issue (the one I didn’t get or read).

It’s written by Sharon Wright and drawn by Randy Duburke and Pablo Marcos, none of whom I’m familiar with. It’s set during the time Black Canary and Green Arrow were based in Seattle, and presented in a rather realistic fashion—Canary only appears in her civilian identity as Dinah Lance through most of this story, only putting on her then-new “costume” at the end of the story, after talking with a woman with a 1988 haircut, glasses and outfit about some violence troubling her and her family, which Dinah decides to investigate. 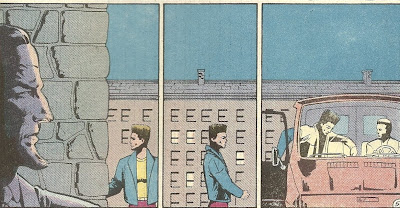 The art is quite cinematic, with single images being broken up with panels as if to suggest a panning camera, and I like how realistic the people are drawn, although attention is paid to unique points-of-view.

And, again, it’s refreshing how different this is from modern Big Two super-comics. It’s drawn in a realistic style, but that doesn’t mean photo-referenced or made to resemble a photos, it just means it was drawn in a particular style.

Here’s a sequence of Dinah suiting up: 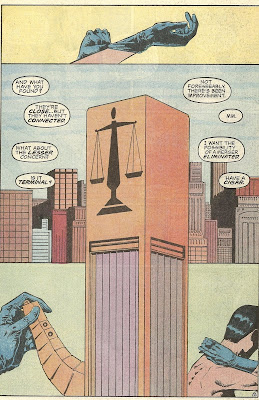 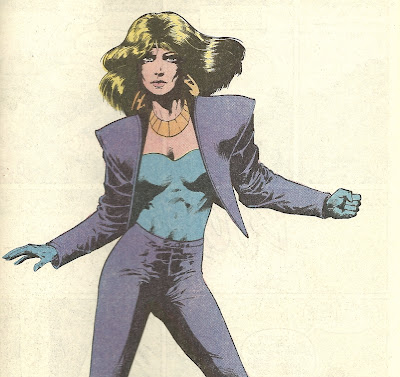 I have no memory of this costume (Perhaps it only existed for this storyline…?) and the shoulderpads sure date it, but otherwise it’s a pretty decent compromise between her superhero look (blonde hair, corset-like top thingee, gloves and jacket) with more functional, off-the-rack clothes (of course, Black Canary’s original costume was something you could put together off the rack, huh?).
Posted by Caleb at 2:57 PM

You just can't go wrong with Hal Jordan being hit in the head.

I don't remember that Black Canary outfit either, but Dinah did have a certain lack of...taste in her costumes for a while there, so I suppose that it's possible. That one with Nancy Reagan and Raisa Gorbachev on the other hand, looks fabulous.

Sharon Wright was Mike Grell's ex-wife, whose previous comic book work included ghost writing a bunch of Warlord stories in the early 80's, towards the end of Grell's original run on the book.

Randy DuBurke popped up at DC in the late 80's, courtesy of one of those "Bonus Book" features that DC was running in some of their titles back in 1988. He briefly looked to be the next big thing, but other than this Black Canary story, an issue of Checkmate! and the covers for that 1992 Arion The Immortal mini, I can't think of anything else he did...

Duburke didn't do much after this... a few "Big Book Of"s, some covers, few short stories in DC anthologies. He eventually became a teacher at SVA.

He did a couple of covers that were HATED by the readers (via the letter pages). I couldn't disagree with them more.