I'm easing back into daily blogging with a links post.

I don't know why we even celebrate Columbus Day. Columbus never would have (accidentally) discovered the New World if it weren't for Wonder Woman saving his ships from prehistoric reptiles and whirlpools . Why don't we celebrate Wonder Woman Day instead? (What's that? We do? Oh, that's right, we do)


—By the way, I’m back from vacation.


—The Mindless Ones share a few depressing instances of Mark Millar saying something super-stupid…this time about something that’s not related to comics in anyway!

I’m not sure what to make of Dan DiDio’s clarifications regarding whether or not the post-Flashpoint, “New 52” DCU has had any Crisis events in its new history/continuity (Short version: No, none of them happened in the new continuity).

What’s especially weird about the statement is that, as things currently stand, everything DC ever published is more or less in, as there are almost always (often stupid, but whatever) in-story reasons for continuity hiccups, inconsistencies and out-and-out fuck-ups, be they the past being altered when it’s being recreated after existence’s destruction, or Superboy-Prime beating up continuity itself or Darkseid’s death warping reality… Nothing’s ever really not “really” “happened,” except for maybe the Elseworlds, Imaginary Stories and some of the events of the original Earth-1, I guess…

It’s especially weird because DiDio can say that, but some of the stuff that occurred in some of the “Crisis” stories clearly did happen. You know, Darkseid still Omega Sanction-ed Batman into the past in order for Batman: The Return of Bruce Wayne and much of Grant Morrison’s Batman run to have occurred, COIE’s Anti-Monitor still showed up in Brightest Day, at least some of which seems to still be in continuity (Even if it’s just Deadman still dating Dove…)

And man, what’s the deal with Kyle Rayner now…? He still exists and was still made a Green Lantern in the same fashion (apparently), so presumably “Emerald Twilight” still happened, so what about Zero Hour, which I guess wouldn’t have happened, but that featured Hal Jordan/Parallax destroying continuity and becoming a villain….allowing for his redemption in Final Night (which doesn’t have the word “Crisis” in it, but is Crisis-like in that it was a company-wide crossover), and then the next step in Hal Jordan’s personal history was Day of Judgment, another line-wide crossover, in which Hal bonded with The Spectre Force, which is the status quo he was at during Green Lantern: Rebirth, which presumably did happen, right…? Or didn’t it…?

This is why, if I were at DC, I would have argued for either leaving continuity as is or hardcore rebooting it completely, because picking out a thread here and there and then trying to think through what that means for all the stories connected on either end will drive you totally insane…

(Also, the way DiDio presented the decision—“…after further review, there have been no Crisis events in the New DCU”—sure reinforces the perception that “The New 52” was planned out over a long business lunch one day rather than months of careful consideration).


—Oh, and that's why Superman is crying in the image above. He's trying to understand his own re-altered history, and weeping is the only rational response.

Check out these Aaron Diaz redesigns for various Justice Leaguers. Just costume design-wise, I like the Superman and Wonder Woman ones alot. The Wondy one could work in the regular DCU just fine. The Superman one isnt’t necessarily an improvement of the original version, but many, many, many times better than that stupid suit of super-armor he’s now wearing.

I kinda like the Power Girl one okay, too. Cyborg looks better here than in his new “New 52” redesign too. I’ don’t really undestand why Jim Lee and company made him soooooooo robotic for a guy who should be something like half-man, half-robot (that is what a “cyborg” is, right?) Is it weird that the new Justice League’s one back guy is basically like 1/12th of a black man, and 11/12ths robot now....?

Speaking of Aaron Diaz, Wonder Woman and Power Girl, this is cute, especially that scene of a tiny Penguin vs. Wonder Woman.

You know, someday someone's gonna do a well-drawn, cleverly-written comics series featuring analogues of Super-ladies like Wonder Woman, Power Girl and Supergirl and just go ahead and draw upskirts and nip slips on purpose in a mature-reader book and just straight put DC Comics out of business, I think. And you can totally use DC characters as long as you don’t call them by name and only make the tiniest cosmetic changes. For example, I just read a weird comic about Batman and Catwoman fighting terrorists a few weeks ago, and all the artist did was take the ears off their costumes and change their names.

An even better teaser tagline than this would be, “Shh…it’s around the corner.”

It took me forever to figure out who that dude in the lower righthand corner of the Entertainment Weekly cover featuring the movie Avengers was supposed to be.

Actually, I never did figure it out; I eventually had to just look it up.

Why does Bruce Banner look like that? With the styled hair and pouty lips the nice-rich-douchebag-socializing outfit?

And why isn’t he being played by Steve Buscemi? Mark Millar specifically requested Steve Buscemi in the pages of The Ultimates.

Do take some time to read Alex Pappademas’ “What the Joker was Doing Naked: Attempting to explain the DC Comics reboot.” His assessment is that it amounts to the publishers doubling-down on their current audience and their current model of making comics (which is, um, what they’ve been doing for a long-ass time now), and there are quite a few great insights in the piece.

The reboot/relaunch was definitely a success, however: “I actually bought and read all 52 of these books, and more than a few of them did not make me die inside.”

Not making one die inside! Really, what more could one (reasonably) expect from DC’s reboot/realuanch of their whole line by the same guys who were making the comics prior to the reboot/relaunch…? 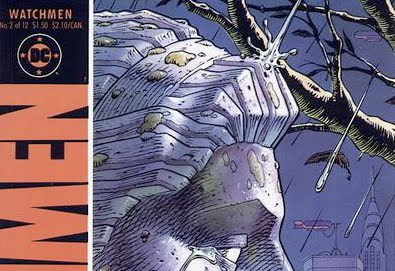 And speaking of DC’s “New 52,” Torsten Adair’s Beat piece “DC Comics: 52 Be Continued” takes the interesting tack of noting a large swathe of DC’s best-selling trade paperback and books and pointing out that the vast majority of the best-sellers are of the self-contained, continuity-free (or continuity-lite) comics, as opposed to the in-continuity, DC Universe stories in which the plot/event is the draw (and even many of those seem to be the work of a particular particularly dedicated writer, like Geoff Johns’ Green Lantern comics).

I also wanted to link to Adair’s story because it include the phrase, "Where's the Silverblade?" You don't hear that question very often in discussions about what comics need.

That…well, I can see what they’re going for with this change in Wonder Woman’s origin, but it seems like kind of a fundamental difference from her original orign, akin to changing Superman’s so that he’s being raised by a big-city single father or having Spider-Man’s Uncle Ben living to a ripe old age or something.

Well, those are terrible examples. I just mean that it’s kind of a big deal, origin-wise, of the sort that changes something fairly essential about the character, and I've long believed Wonder Woman doesn't need anything essential/fundamental from her 1940s origin changed (Although World War II’s significance and its dating of he as a character has certainly caused problems that are hard to wrestle with). If anything, more of that stuff needs embraced than changed up; what Wonder Woman really needs more than anything is simply for very good stories told for a good long amount of time (and, in comics, that means good art for a good long time too, which her book has finally got again for the first time in quite a while).

Also it's kind of a weird story in that as soon as you see the headline, the spoiler will likely be evident. LIke, it's the most obvious choice, not The Wizard Shazam or Ra's Al Ghul or Earth-1 Doiby Dickles

I remain curious what animal or weather phenomenon her dad appeared as when seducing her mom though….
Posted by Caleb at 6:58 PM

Actually, the "Diana was made of clay" facet of her origin was a Silver Age creation,
never mentioned until Wonder Woman #105 (1959). The Golden Age stories were silent about how Hippolyta had a child on an island of women...

Wonder Woman's dad is Zeus because DC looked out to the comic book landscape and said "Hm... There aren't enough characters with daddy issues." That or it was so Johns would feel comfortable writing her at some point when that inevitably happens.

Also, how is it that Grant Morrison looks like a super villain yet his former protege sounds like one?

The Wonder Woman origin bugs me because it is precisely what you SHOULD NOT DO when you reboot a franchise. I mean, reboots are supposed to provide a clean slate, right? Harkening back to the most recognizable most iconic version of a character. The thing you DON'T want to do is immediately introduce contradictory canon. Why do that? Going ahead & making muddled origins that conflict with previous origins is...the sort of thing that requires a reboot to fix. Ugh.

There's relaunch in my reboot! There's reboot in my relaunch! It's two, two great tastes in one!

Before Dan DiDio made his statement, I already thought the previous Crises weren't in continuity; they couldn't be. Two esoteric examples: Firestorm plays a role in Villains United before Infinite Crisis, but that Firestorm "never" existed; Captain Atom jaunted back and forth to the Wildstorm Universe before Infinite Crisis, but that Captain Atom didn't exist either (and if he did, the Wildstorm Universe didn't!).

The situation we have now is just the same as after Crisis on Infinite Earths: COIE happened in post-COIE continuity because Dove Don Hall died (and Barry Allen!), but at the same time didn't happen because that Supergirl Kara Zor-El and Huntress Helena Wayne "never" existed. Which is to say, all the Crises did happen (small "h") including the Final Crisis events that sent Batman back in time, but they didn't Happen the way they appear now on the page ... which only stood to reason since the DC timeline changed, Wally West and the Justice Society never existed, etc.

The weird part to me, really, was how upset people got about this, as if it might have been another way -- Crisis on Earth One didn't remain in continuity after COIE, for instance. The outcry likely stems from DC not being clear enough at the outset as to what this "relaunch" was -- it really is a reboot, not a relaunch, but with the better-selling elements of the old continuity -- Green Lantern, Batman -- duplicated on top.

I've never warmed to Millar, and this doesnt exactly help