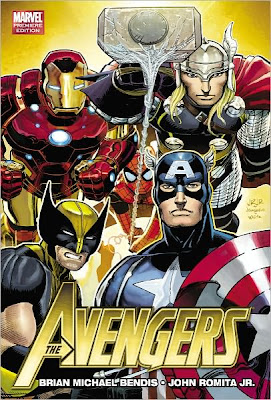 John Romita Jr. used to be one of those artists that I would always say I’d buy anything he drew, based simply on how much I liked his art. And then he went and teamed up with Mark Millar for Kick-Ass and two or three issues of that was all it took to test the limits of my devotion to his work (Sorry JRJR!).

His run on the post-Siege relaunch Avengers was something I was pretty excited about when it was initially announced—JRJR drawing all of Marvel’s most movie franchise-friendly characters smashing shit!—until the issues were actually solicited at Marvel’s reader-reaming 22/$3.99 price point. The fact that Brian Michael Bendis was writing was sort of neutral for me at that point, and I figured I’d just wait and buy a trade collection when it came out.

By the time it did come out though, I realized I had probably read all of the Brian Michael Bendis Avengers comics I needed to read (Bendis has been writing the franchise since 2004, for much of that time writing multiple Avengers titles simultaneously, as well as writing almost all of Marvel’s line-wide crossovers). For a while there—somewhere in the middle of 2007-2010 series Mighty Avengers—I was kind of enjoying the fact that Bendis was obviously incredibly bored with the gig, and was continually developing new strategies for narrating the books and telling the stories, just to keep the plodding plot production fresh, perhaps for himself moreso than readers.

I gave up on Bendis around the time Marvel raised their prices (sneakily, during Bendis’ Secret Invasion miniseries, in which the first issue was oversized for $3.99, but the second issue dropped down to the standard 22-page length and retained the $3.99 cover price) and his tie-in issues of Avenger titles became more-or-less random in focus (rather than part of a narrative concerning the Avengers characters, they featured whatever characters Bendis felt like writing about).

The collection of Bendis’ Siege, which I’m not entirely convinced even qualified as an actual story, convinced me that either Brian Michael Bendis or I had quit giving a shit—either him about his craft, or me about his work—and I lost all desire to buy the trade of his latest Avengers run, JRJR art or no.

(This, by the way, is what I see as a problem with publishers encouraging wait-for-the-trade consumption of their serial comics through decompressed story-telling and ridiculous pricing—when a reader commits to waiting an extra six months or a year or whatever to read a particular comics story, there’s a lot of time for that reader to decide maybe a story he was interested in all those many months ago is no longer something he wants to spend his money on.)

So hooray for libraries! I can look at all those pages of JRJR drawing Marvel brutes brutalizing one another with their fists and superpowers, and the only price is involved is that of reading Bendis’ often-insipid dialogue!

(Have you successfully waded through a 500-word ramp up to the actual review portion of this post? Congratulations, you’re more patient than I would have been with me were I you; of course, if I objected to my meandering writing, than the other I would have told me to stop complaining, it’s not like I was paying for the privilege to read this post or anything.)

I’m pretty sure this was the best Avengers storyline I’ve read from Bendis. It certainly had problems, but it also had a beginning, middle, end (and even a climax!); it was fairly inventive; and it was a true superhero story of the sort Bendis often seems extremely uncomfortable writing (and his discomfort is thus evident in the results).

After a spread of reaction headshots in which various superheroes respond to (former) Captain America Steve Rogers’ request that they join a team of Avengers (this was right after Siege, remember, when the resurrected Steve Rogers had Bucky Barnes continue being Captain America while he himself took the government job of Boss Of All Superheroes, formerly held by The Green Goblin), and some pages of the heroes milling around, the plot begins in earnest.

It features a lot of detritus from Marvel lore—the kid heroes from some Avengers cartoon I never saw, The Maestro version of the Hulk, Ultron, Apocalypse, Kang The Conqueror and/or Immortus—but even if the specifics are unfamiliar, they’re not off-puttingly so. It’s a time travel story, involving time being essentially broken by too much mucking about with it (thanks to Kang, whose whole deal is that he’s a time-traveling villain who fucks with time travel), and thus random, sometimes crazy-seeming things happening in both the present and various points in the future.

It reads a little like one of Jeph Loeb’s greatest hits, allusion-filled, random-crazy-shit-happens Superman/Batman arcs, except Bendis goes to the trouble of finding a believably logical excuse for that random-crazy shit.

To save the day, The Avengers must enlist the only character they know capable of building a specific type of time machine, the Grant Morrison and J.G. Jones version of Marvel Boy, whom Bendis has been gradually transforming from the noble punk terrorist (a sort of 21st century version of Golden Age Namor) into a more-or-less neutered and unrecognizable standard superhero type.

With his help, the teams splits up, with half of the Avengers staying in the presents to fight dinosaurs, Galacuts and Martian invaders from the old Killraven strip in New York and the other half jumping around in time to try to diagnose and solve the problem.

I don’t want to spoil the specifics of the story (even though it’s now over a year old, and even though I’ve already done so to a degree), but it’s rather clever, and involves certain characters reliving events from the same story arc more than once with different awareness caused by the time travel (Maybe seeing Marvel Boy just put Morrison on my brain, but aspects of the time travel reminded me of the JLA arc “Rock of Ages”). The resolution involves something other than mindless violence, too, which is kind of nice, given that much of what the Marvels have been doing to stave off various apocalypses since Bendis’ ascendancy within the publisher has been to simply kill—or at least try to kill—their way out of problems.

The biggest problem with the story was how incredibly cluttered it was. Not because of all the villains that needed fought or the problems needing corralled—that was all part of the conflict, after all—but because of all the characters on the team. There’s Captain America, Iron Man, Thor, Spider-Man, Spider-Woman, Wolverine, Hawkeye, Maria Hill and, unofficially at least, Marvel Boy, and few of them have much of anything to do.

Marvel Boy builds the machine, and Iron Man takes point on all the time travel stuff and problem-solving but, for the most part, the characters are interchangeable, and any character from Marvel’s stable could have filled their very limited roles (fight Wonder Man for three panels, fight Galacuts for three pages, whatever). Bendis takes a lot of (deserved) criticism for how all of his characters talk alike, which is evident here as well, but the plot construction makes them all more or less act the same as well—this same story could have been told with any Avengers line-up going back to the ‘60s.

Maybe demanding that every character be in every story for a unique reason is asking a lot out of a super-team comic book, but I don’t know—it seems reasonable to me to demand that any creative work be able to justify the inclusion of every piece of it through some sort of quantifiable quantity, and it’s not like it’s something that has never been achieved before. Morrison’s JLA run was especially good at having everyone in the story be there for a reason.

Part of the redundancy of the cast in Bendis’ Avengers may simply be because of the characters chosen—do you really need two Spider-People, for example*?—but it’s nevertheless problematic. One could be charitable and assume Bendis just chose character he really liked and wanted to play with, whether or not he did much with them other than spend time with them in this storyline, or one could be cynical and suggest he chose a line-up of popular characters to increase the sales and popularity of the book, whether or not he had anything for Thor or Spider-Man to do other than hit things that, say, Hercules or Nighthawk could have hit just as easily.

JRJR does not disappoint at all in the art. The great virtue of these sorts of Loeb-style “greatest hits” stories is that they allow a great artist—of the sort Loeb so often surrounds himself with— ample opportunity to draw large swathes of the universe the story is set in. So here we get to see Romita drawing everything but the kitchen sink, including more or less random elements, like Thor vs. Galactus, Kilraven, dinosaurs, whatever heroes he happens to want to stick in a crowd scene and so on.

The appearance of Apocalypse is especially welcome, as he comes accompanied by the coolest looking version of his Four Horsemen I’ve seen, gigantic monster versions of superheroes as centaurs. My relative X-Men ignorance means I don’t know if these designs are Romita’s, or if they’ve appeared elsewhere, but they were really pretty cool looking.

Aside from the designs and the opportunity to draw so many Marvels, Avengers is full of big action scenes of the sort Romita is the perfect artist for, and it’s almost completely devoid of the sorts of talky scenes Bendis is notorious for, and the conversation heavy scenes that are in here aren’t staged in the dull talking head format that too many Bendis comics include.

Next: Astonishing X-Men Vol. 6: Exogenetic
Posted by Caleb at 7:27 PM

Do they have access to "WorldCat"? I get a lot of trades through my library shipped from other libraries.

Granted, it usually takes another 5-6 months after the initial release to get it, but for a lot of stuff I wasn't ever interested in buying in comic form, I find I can wait the extra time.

(Frequently, I find out that putting it off that long, I was right in my decision not to purchase whatever it was. There have been rare exceptions to this rule...)

Darn! This was published in my country in magazine-form! Maybe I shouldv`e gotten this. I didn`t get it `cause I feared that it would be too much tied into recent contnuity.

"when a reader commits to waiting an extra six months or a year or whatever to read a particular comics story, there’s a lot of time for that reader to decide maybe a story he was interested in all those many months ago is no longer something he wants to spend his money on."

All. The. Time. I got tired of trade pacing and poor stewardship on monthlies and switched to trades. Then trades proved unsatisfying and seemingly paced for omnibus editions. Plus, say I was interested in seeing how Phil Hester redeemed the JMS Wonder Woman, only for the entire line to get rebooted before that run gets collected. Why should I buy it, then? Further, if I wait long enough, I can usually pick up undesirable floppies for a buck or less each. Publishers barely get any of my money anymore, and many of my friends treat Half Price Book as their comic shop these days.