Quick note: This is the first draft of the review that I eventually whittled down to the 150 words that appeared in last week's issue of Las Vegas Weekly , which I'm posting here because I had a lot to say about the book and not much room to say it (and also because I am moving this week, and don't have as much time to generate awesome new content for EDILW). It's a really, really tough book to read and wrestle with, and while it has considerable visual virtues—and hell, being difficult is, in a way, a sort of virtue—it's not a very good comic book. Here are a few more reasons why that is. 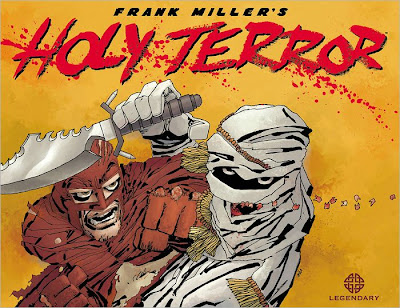 It’s amazing how much taking a single word out of a title can change a book.

A few years ago, legendary cartoonist Frank Miller made headlines with the announcement of a Batman vs. al Qaeda graphic novel to be entitled Holy Terror, Batman!, a play on the 1960s Robin’s catchphrase. The idea, apparently, was to create a WWII era-style propaganda comic, only with Batman punching out Osama bin Laden instead of Captain America socking Hitler.

When the book eventually saw print though, it wasn’t through DC Comics, but the new Legendary Comics, and instead of starring Batman and Catwoman, it now starred The Fixer and Natalee Stack, who are written, designed and drawn as if Miller simply took some Wite-Out to remove the Bat and Cat ears from drawings of the DC heroes. The action takes place in a fake New York City like Gotham, now called Empire City, and The Fixer’s police force ally resembles Commissioner Gordon exactly (There are even street and place names that follow the Batman comics convention of using the names of famous Batman creators, like Robinson Street and so on).

Without the joke title and without the cartoon characters, it’s hard to see parodic propaganda in the work, and if there’s any political ambiguity to Holy Terror, Miller sure did hide it deep. The book is printed in the same landscape format as Miller’s 300, the basis of a politically confused feature film widely interpreted as a three-cheer endorsement of the Bush-era Gobal War on Terror, and it uses the same title font.

The plot is 1960s superhero simple—terrorists attack fake-fake-New York, and fake Batman and fake Catwoman put aside their differences to destroy their common enemy, before the exotic villains can set off a doomsday device.

The terrorists are the ones people feared were attacking on 9/11, not the terrorists that actually exist outside of Hollywood movies: Omnipresent, omnipotent fantasy bogeymen. They infiltrate fake New York with a heavily armed army that includes suicide bombers, stinger missile-wielding strike forces and even an honest-to-God air force with which to shoot down a fake Statue of Liberty, with a nuclear bomb hidden in their bizarrely-rendered mosque (filled with statues of dinosaurs and animals). They even have guys on the inside, including a corrupt city official.

It would be nice to see Miller’s strange revenge fantasy as a commentary on certain American' need for catharsis, a critique of their irrational fear and hatred of one of the three major Abrahamic religions—the two leads are certainly portrayed as hateful, ignorant brutes--were it not for the fact that the book opens with a quote from the prophet Mohammed that fills two entire pages: “If you meet the infidel, kill the infidel.”

Coupled with the faceless villain of the piece's assertion that Al Qaeda means the cell, not in the sense of a terrorist cell, but in the sense of a microscopic part of a gigantic organism at war with the Americans, Miller’s politics are blunter, uglier and more indefensible than ever before.

His artwork remains incredible, rendered in a super-high black and white contrast style with only occasional dabs of color similar to his Sin City work, punctuated with rougher caricatures of various, random political figures. There’s an evocative, even touching section in which Miller draws the countless, disappearing faces of the dead from the first round of attacks, and he draws the faces of all those killed throughout the story, terrorists and innocents alike, with inset panels.

It’s beautiful artwork, in service of an ugly story and uglier still politics. I guess that’s what happens when a genius cartoonist gets terrorized, and puts pen to paper while still in a state of fear.
Posted by Caleb at 7:42 AM

This was as good a review (since it was pretty much the same) as the one in Las Vegas weekly. Nice.

I just read it. It's really lousy, but not for the reasons I expected. Even putting aside the hamfisted political "message" it's just a mess. His storytelling skills have atrophied, and a lot of it was just incomprehensible. I keep trying to think of how it could have worked. I do believe a good writer could have handled a Batman vs. Al Qaeda story and done it well. Frank Miller is no longer that writer. I don't know if I believe he's really the vile racist people seem convinced he is, but this comic is still really terrible and damaging to his legacy. The politics felt more ignorant and childish than out-and-out hateful. I wonder if a story like this could have worked with Batman vs. Kobra, or the Punisher vs. Hydra or something.
But even the art wasn't great, other than a few stark images that were well-done. His Sin City-style anatomy has gotten worse, and everyone looks insanely ugly.