Remember when Marvel used to release their solicitations to the comics news sites the day after DC Comics released theirs? Oh, those were the days! Monday at 5 p.m. DC would release their solicitations, and by Tuesday at 5 p.m. Marvel would release theirs, and a lazy comics blogger could be guaranteed of two back-to-back days of easy content, the sort that involves a lot of cutting-and-pasting and pounding out a sentence or five during commercial breaks of a ballroom dancing-based reality show competition or police procedural.

Then Marvel started releasing theirs the Monday after the Monday DC released theirs, and this week the solicitations dropped sometime on Friday, I think. They're now a moving target. Well, here's my belated preview of their previews, which you can look at in their entirety here... 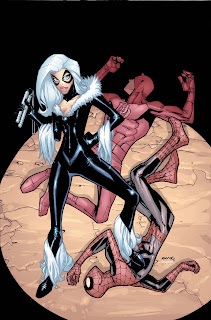 AMAZING SPIDER-MAN #677
MARK WAID (W)
EMMA RIOS (A)
COVER BY HUMBERTO RAMOS
...Spider-Man and Daredevil team up – Part One!
• When Black Cat is arrested, Matt Murdock is the only lawyer who will touch her (her case… we mean).
• The next great love triangle of the Marvel Universe begins!
32 PGS./Rated T …$3.99 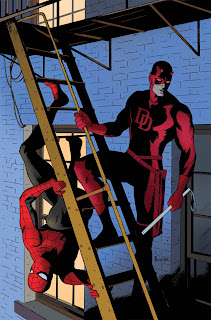 Here’s a great example of a publisher making the act of buying and reading their books as single issues seem completely screwy. Okay, I'm reading Daredevil, and it's great. Mark Waid plus one of two great artists on each issue, for $3 a pop. I'm not reading Amazing Spider-Man, which has different creative teams and, as you can see above, is priced at Marvel's "Fuck You, Marvel Addicts!" pricepoint of $4 for the same amount of pages you'll find in the $3 Daredevil. Why the discrepancy? Because Spidey's more popular than Ol' Hornhead, thus people will pay for ASM whatever Marvel charges for it, so why not jack it up a buck?

Like I said, I've been buying Daredevil in singles, but this particular story apparently begins in a comic book I don't read (and wouldn't want to at that price) and then continues in Daredevil. So I either have to skip a chapter of an ongoing serial narrative, or buy something I don't really want to. However, if I were just waiting to read Daredevil in trade, I wouldn't have this problem as the issue of ASM would likely appear in the Daredevil trade collection, and the collection process generally levels the wonky pricing (like, 22 pages of $4 comics and 22 pages of $3 comics cost about the same in terms of fractions of a trade collection...usually).

Also, in Marvel's own bulletpoint format: 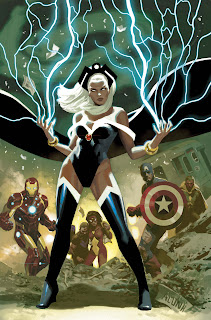 AVENGERS #21
BRIAN MICHAEL BENDIS (W)
RENATO GUEDES (A)
COVER BY DANIEL ACUÑA
...
•Storm is now an Avenger!
• How can the Avengers battle the combined forces of Hydra, AIM, the Hand, and H.A.M.M.E.R. under the leadership of Norman Osborn?
32 PGS./Rated T …$3.99

Hey, Storm! You know, they probably shoulda made Storm an Avenger pretty much forever ago, right about the time that Wolverine broke the barrier for having X-Men on The Avengers (Or re-broke it after Beast broke it forever ago, I guess...Beast is the Jackie Robinson of X-Men joining the Avengers) and Storm was a member of the Marvel Adventures Avengers.

That said, does it seem like there have been a lot of comings-and-goings on The Bendisvengers team? I've only read the first arc so far (in a library-borrowed trade, which I hope to discuss at some point this week), so I haven't exactly been keeping up, but it seems like I see a lot of comings and goings in these solicits for the series... 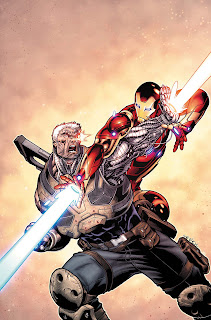 Here’s all I know about Cable: He has a metal arm and often carries a really, really ridiculously big gun. I assume he has some mutant power I don’t know about too, right? Like, he must if he’s supposed to be a match for Iron Man (or, like, any Avenger, New, Dark, Secret, Assembled or Academic). 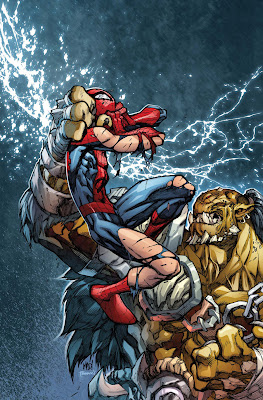 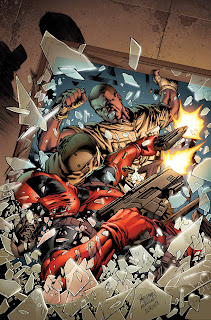 Er, who is Marcus Johnson…? 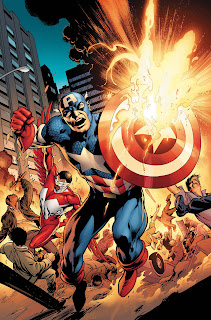 Alan Davis is a very good artist, and his is an interesting style when compared to that of a lot of the other folks who have been teamed with Brubaker on Cap comics over the last five years or so.

I wonder what the "Venom variant" covers are going to look like (there are a lot of solicitations this month mentioning Venom variants). Will they simply be Venomized versions of the stars of each book? I hope so, as that would probably pretty cool. Cooler than a bunch of random images of Venom just, like, chilling on the covers of books that have nothing at all to do with him, anyway. 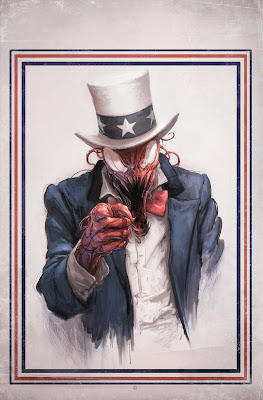 ...Another nice Clayton Crain cover for the Carnage USA miniseries. 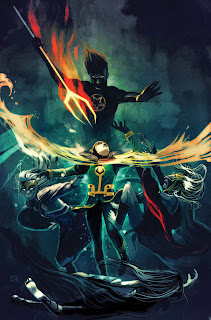 JOURNEY INTO MYSTERY #633
COVER BY STEPHANIE HANS
...
• The Son of Satan guest-stars!
• Fallout from Fear Itself leaves thousands trapped in deadly fever dreams around the world.
• Why is it Loki’s fault? Again.
• And Leah of Hel discovers the wonder and consequence of milkshakes…
32 PGS./Rated T+ …$2.99

Hey, Son of Satan! Alright! Huh, I wonder why there aren’t any creators on this book…? 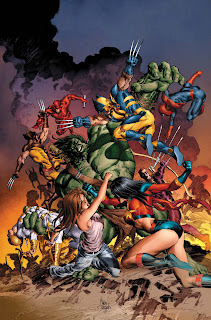 Can’t tell who’s on each of the teams from looking at this. I guess there's an evil Ms. Marvel on the team...? And maybe Daken's back, wearing his old Dark Wolverine costume for some reason…?

And is Iron Fist gonna be a Defender and an Avenger, or is he gonna be on both teams…? 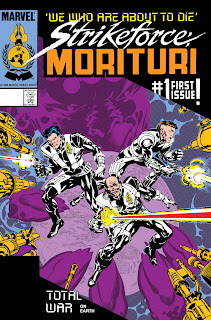 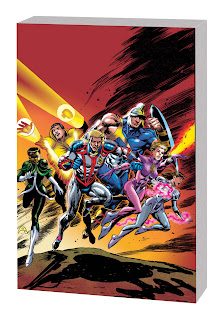 STRIKEFORCE: MORITURI VOL. 1 TPB
Written by PETER B. GILLIS
Penciled by BRENT ANDERSON & WHILCE PORTACIO
COVER BY BRENT ANDERSON
A savage alien race called the Horde has invaded Earth, enslaving its people and plundering its resources.
Scientists have devised a method of fighting back — the Morituri Process, which grants enhanced abilities to a select few compatible humans — but the transformation is fatal within a year. Now, a handful of brave volunteers make up Strikeforce: Morituri — an elite, experimental and highly effective fighting force against the depredations of the Horde. But the heat of every battle, the celebration of every victory and every quiet moment alone is tainted by the inescapable knowledge that — win or lose — their fate is sealed. Collecting STRIKEFORCE: MORITURI #1-13.
328 PGS./Rated T …$34.99

Hey old timers, is this series really good…or, like, good for its time? I have a vague understanding that it is or was very well thought of for what it was, but I have no firsthand experience, nor do I remember exactly what circles I’ve heard it talked up in before either. 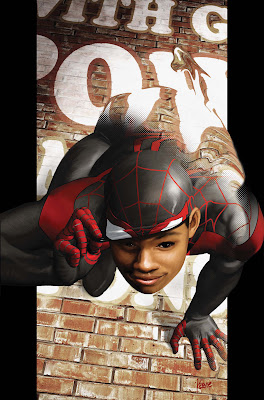 This seems like the best of Andrews’ Ultimate covers so far, which have been pretty lackluster for an artist of his caliber.

Also, does Miles’ Spider-suit have some light-bending Predator stealth tech built in…? I did not know that. 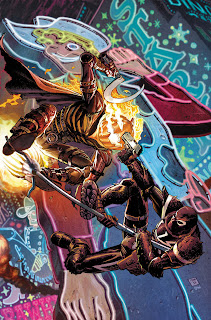 I thought the Punisher killed Jack O’ Lantern in Civil War…? Is he bck from the dead, or is this a legacy version? I really like the look in general, even if he’s wearing about 59 leather straps too many. 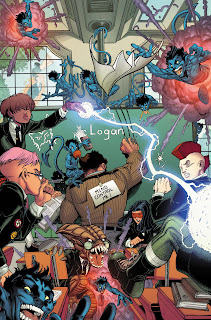 If the answer to that third question is "Wolverine" (due to a secondary mutation), then I am down with this series, $4 price tag or no.
Posted by Caleb at 4:21 PM

Caleb, I remember liking "Strikeforce Morituri" a lot when it was published here in Brasil a gazillion years ago, but my memory is quite lacking in that regard. I am tempted to buy this, though.

And the invisibility/camouglage thing seems to be one of Mile Morales' powers.

Cable is telekinetic + has all his future tech weaponry stuff. Marcus Johnson has something to do with Fear Itself, but I only flipped thru the last issue so I don't know what his deal is...

Strikeforce: Morituri should have been an Epic series. It confused fanboys at the time because they couldn't figure out how it fit into the Marvel Universe (it didn't.) I haven't read an issue in decades, but I seem to recall it being novel because each character's power tended to come with realistic consequences, like having to eat constantly to maintain a super-metabolism. The art was gorgeous and human, possibly Brent Anderson's best work. He was great about giving each character their own unique body type and facial features. The book ran in real time, and each character only had a year to live, so it was a heavy, morose book with lots of dramatic character moments/deaths. You could probably snag an entire run off eBay for the price of the trade, though. Sure enough, I just checked Lone Star Comics' web site, and you can get every issue for less than a dollar each.

What I remember about Strikeforce: Morituri was that because the characters only had (at most) a year to use their powers, the series sort of petered off after Gillis left the book after the first rounds of characters died, though I don't remember Hudnell's issues as being particularly bad, though.

That said, I have fond memories of this and I should probably dig it out and reread it.

The Jack O Lantern that Venom is fighting is a new one that is possibly the son of this big bad guy who knows that Venom is Flash Thompson and is using that as an advantage. Fun times all around.

The first 20 issues of Strikeforce: Morituri" constitute one of my favorite runs of comics ever, with Gillis and Anderson (and other guest artists) telling a mature story within the confines of all-audience title. (And by mature I don't mean T&A and gratuitous sex.

More science fiction than superhero, it shined brightest when it explored the hopes, doubts, and motivations behind each character who underwent the process to give them power. Gillis got it right most of the time, and wrote some incredibly memorable scenes and characters.

The latter half of the series stumbled a bit after Gillis and Anderson's departure, and it became more of a political thriller. It suffered from Hudnall having to clear the deck to make room for characters he created.

I read the final mini-series, Electric Undertow, at about the same time I started reading William Gibson, and remember noticing a certain Gibsonian cyber-punk influence on the series. Which was cool for my teenage self.

Okay, I'm a crappy reviewer, but this is my way of encouraging you and others to give it a try. I've been hoping for this to come out in trade for a very, very long time.

Why are you done with Wolverine and the Xmen? Interested to know, if it isn't just the silly price