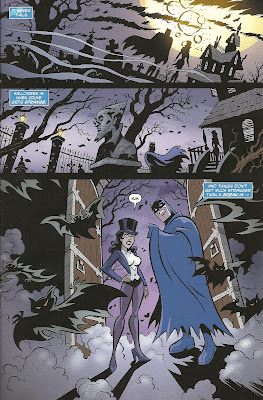 All-New Batman: The Brave and the Bold #12 (DC Comics) I was slightly disappointed to see a name other than Rick Burchett’s beneath writer Sholly Fisch’s on the cover of this issue, as Burchett’s art is one of this series’ chief virtues, but that disappointment faded as soon as I turned the page and saw fill-in artist Ethen Bevers’ moody, inky artwork, given an even spookier, month-appropriate feel by Guy Major’s superior coloring.

In this issue, Batman teams up with Zatanna to investigate a Halloween night break-in at the House of Mystery, where perpetrators unknown turned Able into a tree and toilet-papered the foyer.

I’ll refrain from excitedly rattling off a list, but Fisch digs deep with the guest-stars and cameos, including everyone from Golden Age Batman villains “The Vampiric Monk” and Hugo Strange’s Monstermen (both of whom were resurrected for Matt Wagner Batman comics in the previous few years) to Wildcat’s were-cat son Tom, Wildcat III. 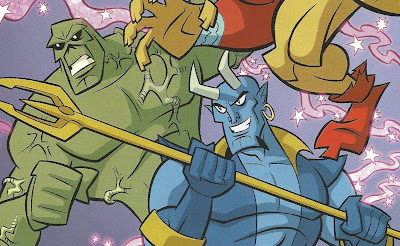 This issue features a few panels of Swamp Thing action, and the Cain and Able retain at least a bit of their Sandman flavor, with the former chasing the latter around trying to brain him with a shovel (The story ends before he manages to connect, of course).

As fun as the parade of characters is, and as fun as it is to see an artist working in a distinctive style adapting characters from so many disparate sources into that style, the comic’s greatest virtue is just how perfectly told it is. It’s a finely structured done-in-one, with a beginning, middle, end, an action-packed climax, and a clever resolution that hearkens back to the mystery that initiated and drove the conflict.

After a month of trying and reading more DC comics than I have in a few years, this particular issue of this particular comic book stood out as the best I’ve read in a while. Even in the “New 52” comics I liked, I could always find something to complain about, something I would have liked to have seen done differently, or a weak spot in the story or art or presentation. But this? This is perfect.

Green Lantern #2 (DC) If I didn’t already know from watching Superfriends cartoons years ago that Sinestro was a bad guy and Green Lantern Hal Jordan were a good guy, I would assume the exact opposite based on what’s presented within the 20 pages of this comic.

Sinestro uses his new Green Lantern ring to make the no-longer-a-Lantern Hal a ring of his own, and Hal’s first act is to try and kill Sinestro with it (Saying “Adios, Sinestro!” on a two-page splash that accounts for a full one-tenth of the comic. Seriously guys, cut that shit out! This took less time to read than it took the guy who sold it to me to ring it up and put it in a bag).

Later, when the two encounter a suspension bridge in the act of collapsing, Hal saves a single car and catches a pretty woman in his arms, making bedroom eyes at her and saying, “That’s all I get for saving you?” Sinestro, meanwhile, saves every single person on the bridge and rebuilds it in a second’s time, and flies away from an adoring crowd who want to thank him.

Yes, Sinestro does chop a very inventively designed evil alien in half with a giant green sword, which seems more villainous than heroic, but it was an evil alien attempting to kill him; Hal tried to kill Sinestro for giving him a ring, like that asshole genie in the Arabian Nights story that was going to kill the fisherman who let him out of the bottle.

Pencil artist Doug Mahnke remains phenomenal, and the month or so off that he was given in preparation for “The New 52” apparently gave him enough of a headstart that this issue only had two inkers, instead of the customary four or five.

Johns’ scripting is sharp, particularly if he’s intentionally making Hal look like a hotheaded, small-minded a-hole whose main virtue over his archnemesis is that he was never a space Hitler in pre-Flashpoint continuity, but I remain disappointed that rather than the shorter page count leading to more efficient and compressed story-telling, we simply get two pages less each month now.

SpongeBob Comics #5 (United Plankton Pictures) In addition to the normal features—an R. Sikoryak pirate-themed table of contents, James Kochalka’s gag strips, Dave Roman’s draw-something one-pager, a crazy choose-your-own-sequence strip that drives me mad trying to read—this issue contains a strip illustrated by Richard Thompson, an educational strip written by editor Chriss Duffy that taught me that sponges are animals with no brains or central nervous systems (Is that why Spongebob is so dumb? Do starfish have brains? Because Patrick is even dumber than SpongeBob, isn’t he?) and a pretty awesome comic strip from what is probably the last creative team I ever expected to see: Chuck Dixon and Stephen DeStefano.

Unless there’s another Chuck Dixon out there, then I guess this is the writer of Punisher and Batman comics uniting with an animation artist and designer to tell a story based on a TV cartoon for children…? That is the magic of SpongeBob Comics. And/or the magic of editor Chris Duffy, long may he edit.
Posted by Caleb at 9:28 PM

I'm liking Green Lantern so far. Sinestro and Hal Jordan are an unlikely pair and Johns is handling the tension between them very well, and I loved Sinestro teaching Hal a lesson about the real potential of a Green Lantern ring. It could definitely be a lot tighter (that splash page was a pretty absurd waste) but so far it's a fun read and the character work is very sharp.

Chuck Dixon has written for Simpsons comics and stuff before. Here's a pretty rad quote from after he was let go from the DC books he was writing a few years ago.

"And thank God for the awesome folks at Bongo. They don't care of you're a card-carrying anarchist as long as you bring the funny and understand their characters. They have saved my ass and my car and my house a number of times. "

Not yet, no. I dropped the TEC run because I didn't like the Question back-ups, and decided to read that in trade. So I'm waiting for the trades of this run of Williams-drawn Batwoman comics too.