Justice League #2 (DC Comics) This was an quite a Marvelous issue of Justice League, and while I don’t mean that as a compliment, I suspect its makers would take it as one.

Its format and price point is like that of a Marvel comic from a few years ago. It’s $3.95 for 22 pages, with eight pages of “extras” attempting to soften the pain of the reaming; four of those are sketchbook pages featuring Batman and Superman, and the other four consist of one of those weird prose “transcriptions” of conversations between characters whch read a bit like escerpts from an unused screenplay, of the sort Brian Michael Bendis comics would occasionally sport in the back (Here it’s a transcription of a conversation between Amanda Waller and Steve Trevor).

Although it’s 22-pages long, it reads like substantially fewer, with two two-page splashes and one one-page splash. The moments given the extra emphasis in those two-page splashes are awfully dubiously chosen—the first simpy shows Superman and Batman in the same panel together for the first time, the second shows Superman breaking a bunch of chains—another Bendisan touch in which the potentially exciting thing isn’t shows in favor of something dull (For example, Superman’s narration notes that Batman has thrown tear gars, sonic grenades and tasers at Superman to no avail, but the splash shows the aftermath, of the two simply glaring at one another rather than fighting. Later, we learn this isn’t the first time Green Lantern and Flash met; they had previously teamed up to fight Gorilla Grodd).

Beyond the little things though, the story itself reads like a classic Marvel story, rather than a classic or modern DC one. As in the first issue, the heroes are viewed with suspicion by the general population—the Central City police are frantically trying to catch The Flash, who is worried about his public perception—and the heroes blunder into conflicts with one another, misunderstandings leading to brawls which then lead to team-ups.

As a fan, something seems…wrong about the choices being made here, like having Green Lantern and Flash team-up before Superman and Batman had even met one another, or tying Cyborg’s secret origin and the origin of the entire Justice League as a unit into Jack Kirby’s Darkseid’s first incursion on Earth. As with the first issue, it seems like a decent if overpriced chapter of an Elseworlds mini or new Ultimate Justice League title, but as the new, modern version of the foundational story of the DC Universe?

It’s a terrible disappointment. Just like the first issue.


Tiny Titans #45 (DC) Do you miss Stephanie Brown as Batgirl, or, like me, Cassandra Cain as Batgirl? Don’t worry; Art Baltazar and Franco have got you covered with a Batgirl pary and Batgirl soccer team in this issue of Tiny Titans: 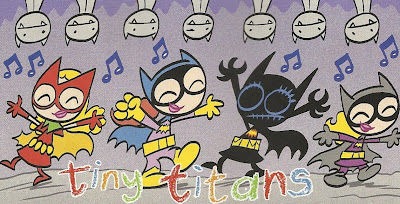 How about The Secret Six, the stars of one of the relatively few “old” DC series that didn’t make the cut for “The New 52”…?

They’ve got you covered there, too: 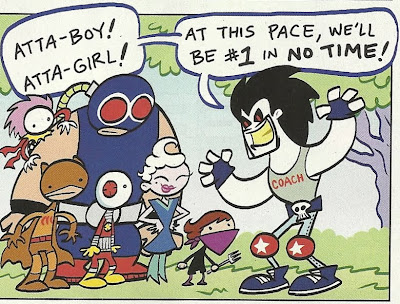 (If you're wondering what they're doing in Tiny Titans, they're Coach Lobo's soccer team, playing against Coach Huntress' Birds of Prey soccer team).


Wonder Woman #2 (DC) Return to Paradise Island for the first time with Brian Azzarello and Cliff Chiang. It’s a more butch, more realistic version of the all-girl playground of the pre-Crisis DCU, complete with a blonde Hippolyta.

The cliffhanger was pretty publicly spoiled already, but this issue moves the Hera vs. Wonder Woman for the fate of Zeus’ unborn children admirably.

Chiang’s art is still great, and in the upper tier of anything being created for corporate super-comics at the moment, and Azzarello’s plot and script are still perfectly serviceable genre entertaiment, more in the mode of straight fantasy than in the superhero genre.

It’s also educational. For example, I learned Amazons can smell penises from a great distance: 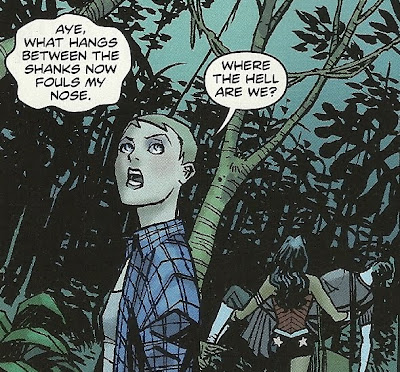 By the way, did you see the sort of technology the Central City Police Department had five years ago, back in 2006? 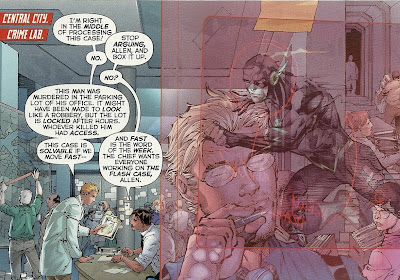 Imagine the tax rate they must have there to pay for those space-age computer shit!
Posted by Caleb at 7:50 PM

Obviously the Central City PD has access to the same technology they use on CSI: Miami.
So far I've seen nothing that makes me regret not picking up this book.

And I have to admit that I enjoyed Justice League, simply because it was so over the top. And Hal being an idiot of course.

What was up with Barry's face in that panel? Did it just miss getting inked?

Obviously the Central City PD has access to the same technology they use on CSI: Miami.

Really? The online cop shows I watch right now are the Law and Orders and Castle, and on the latter they use a plain old white board.

The thing in the CCPD looks more advanced than what the Rebel Forces used to plan attacks in Star Wars.

What was up with Barry's face in that panel? Did it just miss getting inked?

Yeah, it looks like it was miscolored. Like, Lee and Williams probably intended for it to be in black and thus have Barry's face dramatically enveloped in shadow, but the way it was colored it looks more like he's a kind of human Mr. Potato Head whose eye fell out.

The dialogue in Justice League 2 was painfully bad. Only the Flash sounds like a real person. Since I'm not much of a Jim Lee fan, I think I can confidently stop reading this book until Johns finishes his 100 issue run. Or until they reboot it.

I'm serious. The cops on CSI: Miami use the same technology as in Minority Report. The show is super-cheeseball, though it's mostly intentional.