Aquaman #2 (DC Comics) Okay Geoff Johns, I know we talked about this: If DC’s books are only to be only 20-pages long now, you absolutely, positivelyhave to stop using double-page splashes for the title page (here, a simple reveal of the authorities swarming a crime scene) and full-page splashes for the cliffhanger ending (here, nothing more suspenseful than the the lead carnivorous monster reiterating his plan to go ahead and try to eat Aquaman). Once again this is a 20-page book that reads like a 15-page one.

The defensiveness of the first issue has receded a bit in this second issue—Aquaman doesn’t fight a strawman this time around, for example—but our hero still seems extremely defensive about things like the color of his shirt or strangers getting his wife’s name wrong while asking for their help.

The problem with this defensiveness is that it supposes everyone in Aquaman’s world knows him as well as we do in our world (that is, well enough to make fun of or misunderstand aspects of the character like his powers, origins and costume), but not well enough that they’ve ever seen him do anything. (In the new DCU Aquaman has apparently never save the world, or demonstrated his powers in front of a TV camera—one wonders what he’s been doing with the Justice League for the last five years of the new DCU timeline).

Part and parcel to Johns’ attempts at making Aquaman “cool” is that Johns apparently equates cool with bad-ass, so that in this issue Aquaman and Mera brutally murder their way through a horde of humanoid monsters: 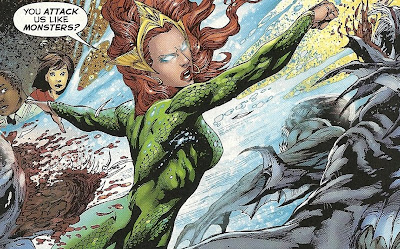 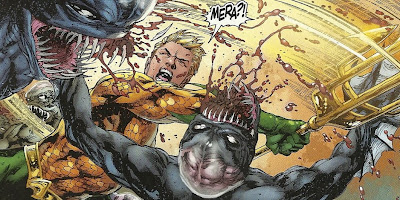 
Captain America and Bucky #623 (Marvel Entertainment) Bucky and Toro learn about concentration camps firsthand when they seek to rescued a captured U.S. spy, whom the Ratzis brought to a nearby camp to interrogate.

I swear I’ve read a Bucky and/or Cap discovera concentraion camp for the first time—maybe in one of those 70th Anniversarry one-shots?

The art by Chris Samnee is, as always, great, and colored by Bettie Breitweiser for maximum sadness.


Daredevil #5 (Marvel) Hey, have I mentioned how terrific the art in Daredevil is lately? 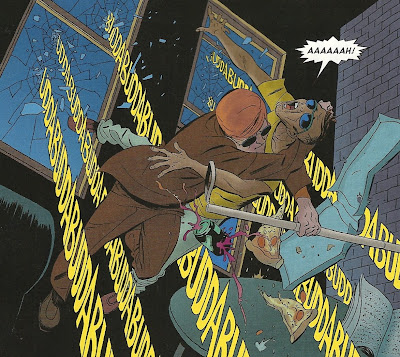 Well Marcos Martin is the best.

There’s a new villain introduced in this particular issues (or new to me, anyway), a villain I’m kind of intrigued by his costume, which sports the logos of various evil marvel Universe organizations, as if it were the bad guy equivalent of a NASCAR’s driver get-up, or that of an evil Booster Gold, I guess.

I liked it a lot.

It’s slightly over-written in the pleasingly purplish style of Moench, and the premis is super-simple in the manner of 1993’s “What If SupermanWas Batman?” comic Superman: Speeding Bullets, or 1994’s “What If Batman Was Green Lantern?” book Batman: In Darkest Kngiht. Here it’s “What If Catwoman Was Batman, and Batman Was (a More Brutal) Catwoman?”

So Catwoman races to answer Commissioner Gordon’s Cat-signal in her Catmobile and, after battling the colorful criminal of the night, retires to her Cat Cave (Where instead of a giant dinosaur statue she keeps a giant saber-toothed cat statue).

Balent has a certain…reputation for overly sexualizing his depiction of his star and for his often ridiculously sexy (well, let’s make that “sexy”) designs for and depictions of his female characters.

And yes, his Catwoman here has breasts that look swollen and held aloft as if they were full of helium (although they are much smaller than Tarot’s, so there’s that!), and yes, she walks around on her tip-toes like a Barbie doll.

Balent (and Moench) are really going for it here, too, so that Selina’s Alfred is Brooks, who wears a sexy French maid’s costume as her uniform (fishnets, garter and frilly skirt that doesn’t even cover her panties) 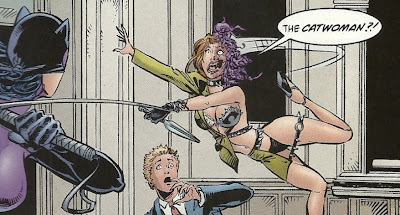 And yeah, Balent often poses his female characters so that they are practically on all fours when they’re checking something on a computer screen or dusting something.

It is, essentially, the same sort of shit that bothered the hell out of me when I would see Ed Benes doing it in the pages of Justice League of America or his recent return to Birds of Prey or in his Superman or Green Lantern stories, but doesn’t bother me a bit here. I’m not positive why that is, aside from the fact that Balent is a better all-around artist and comics storyteller than Benes is, but I think it has something to do with the context. Benes was sexing up stories in which arched backs and thrusting, barely-clad asses had nothing to do with the story or the tone of the book, whereas this is an alternate reality story in which the star is wearing bondage gear over her regular fetish suit on the cover, so it reads like a comic that keeps its promise rather than wanders into weird territory at the whim of a bored artist who would rather draw Wonder Woman’s butt than Lex Luthor’s face, script be damned.

Balent is inked by Kim DeMulder and colored by “Wildstorm FX,” and I think the art looks a lot better here than what little of his work I’ve seen in more recent issues of Tarot (Basically just scans that Chris Sims used to post on his Invincible Super-Blog)

There was a lot of visually fun stuff in this story, I thought.

I really liked Balent’s redesigns of Killer Croc, which is essentially just that of an actual crocodile head, gigantic size and huge, whipping-tail: 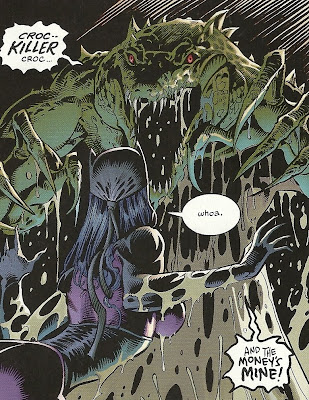 (This was before Jim Lee’s “Hush” story arcre-design, after which point Killer Croc would regularly be depicted with a more crocodile-like head)

Here’s his Joker, which I don’t really like the look of, but I appreciate him doing something unusual with, and can also appreciate how fucking creepy this Joker is—I can’t really look at him without feeling my skin crawl as I imagine what all those pins must feel like: 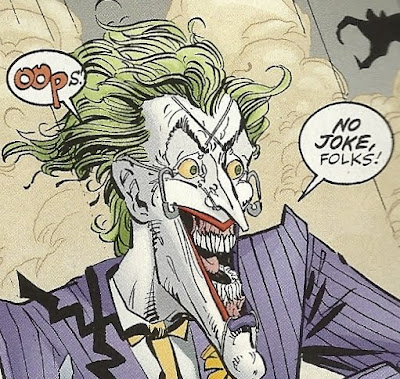 I also kinda liked his Batarangs: 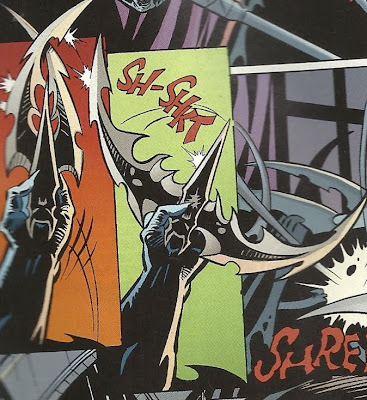 Not so much for the way they look, which is actually kind of overdone and silly, but I like how the wings fold out, so that it looks like a bat just chilling upside down on the ceiling, until he opens it up and gets ready to throw it, at which point the bat spreads its wings.

It’s the little things I appreciate in comics art sometimes, like lady Two-Face's double-baded knife or the super-pointy architecture of the cityscapes, which makes it seem as if Gotham City is all steeples.

Your mileage will, of course, vary. Moreso than usual, in this case, although I found it telling that even at his most extreme, Jim Balent under Denny O’Neil was much more restrained, classy and tasteful than the current DCU.

For example, Balent drew the gal in the French maid’s outfit dead with a huge metal blade rammed through her skull, the tableau is completely blood-free. 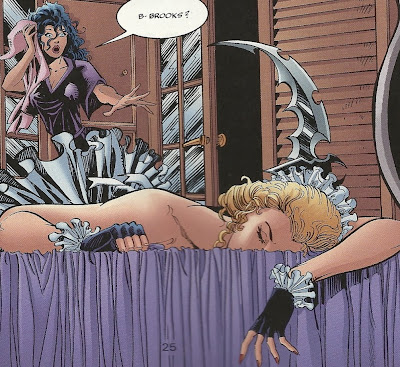 These days, Aquaman’s wife can’t even punch out a monster without a pint of blood-spray.

Justice League Dark #2 (DC) The bulk of this issue is concerned with Deadman and Dove’s relationship and how difficult it is, given that the former is Mikel Janin a gohst, and they can’t have sex unless he possesses someone else’s body to use during the act, which she seems to think is pretty gross (I agree; aside from the creepy factor of forcing someone into non-consensual sex, how does Deadman screen for STDs…?).

It’s all pretty funny, but it’s played so straight I can’t tell if it’s meant to be funny or not. I enjoyed it, whatever writer Peter Milligan’s intent was.

The few remaining pages deal with a few other characters—Constantine, Zatanna—being nudged closer into conflict with the very powerful, very insane Enchantress.

The story is okay, if slow, but I can’t take the palsticy, photo-referenced art of Mikel Janin. I think I’m going to go ahead and drop this, and maybe check back in with it via library-borrowed trades at some point in the future.

The Smurfs Vol. 8: The Smurf Apprentice (Papercutz) Three Gargamel-flavored stories are found in this collection, which appeals to both my sense of whimsy and my sense of not wanting to spend a lot of money on comics (Only $5.99 for the soft cover version!).

In the title story, Smurf, one of the Smurfs, wants to be Papa Smurf’s apprentice, but Papa Smurf rebuffs Smurf, so Smurf decides to sneak into Gargamel’s and steal a spell to practice the dark arts on his own. The second story has Gargamel capture ever single Smurf but one with a serious of devastatingly clever traps (unfortunately for him, he uses up all of his good Smurf-trap ideas in this story, I guess), and in the third a mole causes problems for first the Smurfs and then Gargamel.

"you absolutely, positively have to stop using double-page splashes for the title page"

No, he doesn't, but you absolutely, positively can stop buying the comic if you want.

Than seemed less snarky than just plain rude, not to mention obtuse. Nothing quite annoys me as much as people who get pissy over reviews. If you can't tolerate an opposing opinion, why bother reading a post that's explicitly designed for a guy to state his subjective view? Also, he's totally right. Geoff Johns used to write meatier scripts, but today if anything were to stop me from buying Aquaman, it would be its perceived brevity. The self-conscious badassitude doesn't help, either.

Michael "Hdefined" Aronson's comments get marked as spam as soon as I notice them, and blogger's spam en-markening apparently lasts about a week, at which point he gets a new comment posted until I notice it and mark it as spam and the cycle begins anew: It is the price I pay for having a blog, I guess.

Anyway, in the future, don't feel compelled to respond to anything he says, as it won't be here very long.

I will never understand what possesses anyone to be that persistent of a troll. It's like, just stop reading the site if you don't like it.

The whole 'Aquaman correcting the cops for saying Aquawoman' thing seemed kinda weird to me too. Mera is her name, right, not her "super-hero" name, so why isn't she Aquawoman when you think about it? Aquaman wasn't telling the cops to call him "Arthur", was he? If it wasn't for the amazing art I would've dropped this book already. A moody, defensive hero and a story that's barely gone anywhere in 2 issues is making it a chore to read. One more issue like this and its on the drop pile.