Review: Tales of The TMNT #7 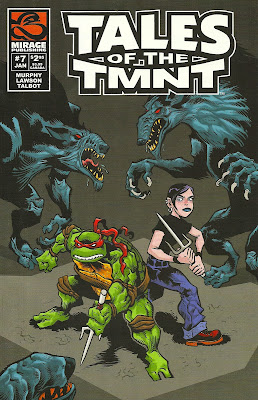 The cover for the seventh issue of Tales of The TMNT is a pretty perfect one in that it tells you exactly what you can expect to find underneath it: Teenage Muntant Ninja Turtle Raphael and teenage girl Shadow fighting werewolves.

The story begins on the rather lovely Michael Dooney-drawn frontspiece, featuring Shadow—the adopted daughter of Casey Jones and April O'Neil, born to Casey's girlfriend Gabrielle in "City At War"—reading a diary she wrote five years ago, when she was a younger, apparently angrier and jerkier teenager (according to her own narration).

The story, "Darkness Weaves," is the story of Shadow's last night as a New Yorker, and it's the work of Steve Murphy, Jim Lawson and Eric Talbot. Murphy writes the script and Lawson handles the pencil art, while Talbot contributes to both, co-plotting the story with Murphy and inking Lawson's pencils. (As I've mentioned before, one thing I really like about the old Mirage comics is the way they are so often created by a group of creators who function a little like a rock band, everyone contributing to everything, just in different capacities or degrees of involvement. Even after Kevin Eastman left, and even on this sister book to the Peter Laird-written TMNT Vol. 4, you see the same small stable of Mirage studio mates working on many of the issues together as a group).

So it's a good five years or so ago, and Casey and April have gone on vacation, leaving Shadow in the care of her grandfather and uncles, Splinter and the Turtles. She's watching videos of her favorite singer Lilith—whose lyrics consists of bad, "dark" poetry in a font I hate—until midnight, at which point she attempts to sneak out of the sewer lair she's staying in. Raphael busts her however, and after some fun banter—I really like the idea of the now older, wiser Raph trying to parent his best friend's almost-grown daughter—she gets sent back to bed.

She eventually manages to ditch Raphael and meet her friend Sloane in the city, where Lilith happens to be playing. Raph trails her to the show, where no one seems all that surprised that the entire audience is female. Hell, even the two security guards are female. After another lame song, Lilith uses some ceremonial-looking knives to cut herself and fill a fancy chalice with her own blood.

It gets passed around for her fans to drink, while a skylight overhead opens, letting the moonlight in and, well, you've seen the cover already, so you can probably guess what happens to the girls who drink her blood.

Luckily for Shadow, she notices everyone turning into werewolves around her before drinking.
Together she and Raph fight some werewolves and, before they can become completely overwhelmed, Shadow's other three uncles arrive.

In the ensuing fight, Shadow accidentally stabs Sloane with a sai, seemingly killing her (although, it wasn't silver...would that work...?), recognizing her mistake only when she hears Sloane say "frig," her favorite swear word, and apparently the only one that appears in the Turtles comics without being represented by a grawlix.

Lilith, herself a werewolf recognizable from the others only by her ankh necklace, swears vengeance against Shadow, and so Shadow is exiled to the Norhthampton farmhouse for her own safety, Splinter relocating there in order to raise her (And that's where we find the pair of them at the opening of TMNT volume four). 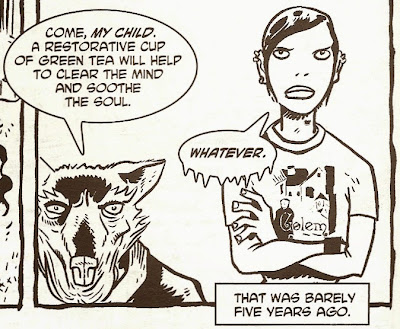 The very last panel includes a question mark after the words "The End," and the answer is, of course, no: 2007 miniseries Raphael: Bad Moon Rising by Bill Moulage, Jim Lawson and Eric Talbot would pick up where this issue left off, not unlike Leonardo: Blind Sight spun out of Tales #5 (Bad Moon Rising, by the way, features cover art by TMNT fan and EDILW favorite Ross Campbell; I know IDW is using their own rebooted continuity for their TMNT comics, but man, how great would a series set in the Mirage continuity and featuring the adventures of teenage ninja Shadow and her mutant turtle uncles by Ross Campbell be...?).

As straightforward as the plot and script for Tales #7 may be, it has some witty moments. 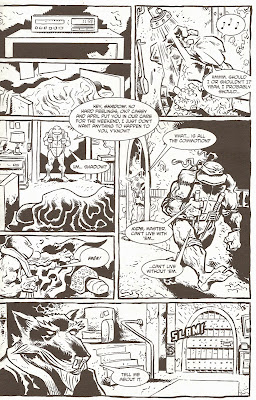 And the art is great. Lawson's work may be an acquired taste for some, but I've long ago acquired it and, as I've been working my way through Tales issue by issue, I've noticed that, perhaps because Lawson was drawing the TMNT series at the time (and/or that he's drawn the bulk of all the TMNT comics published), his contributions to the series seem some how more real or official than some of those by other artists.

This issue has little in the way of shading or toning, making for a particularly stark black and white type of black-and-white, more appropriate than usual given the faux goth nature of Lilith as performer, and the supernatural goings-on. While I would have loved to see what this issue might have looked like had it been penciled by Talbot as well (or by Eastman, whose Splinter always looked like more of a scary werewolf than a rat to me), I liked all the thick black he brings to the table drawing board.

There are several scenes in which Raphael appears more as white lines on a black shadow than vice versa...

...which looks particularly compelling when applied to Lawsons rough-hewn, semi-simplistic design for the ninja turtles.
Posted by Caleb at 7:46 PM