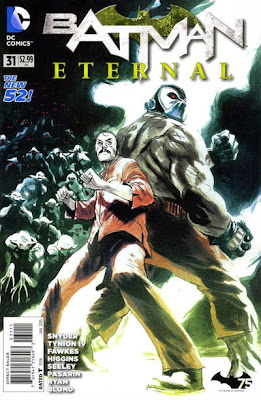 Batman Eternal #31 (DC Comics) Bane might have been he man who broke the bat, but he's no match for Alfred Pennyworth. That's what I found most exciting in this particular issue, which is focused almost entirely on the aftermath of The Spectre blowing up Arkham Asylum in order to send Deacon Blackfire's ghost back to hell or whatever he did, exactly (I like that artists Fernando Pasarin and Matt Ryan depict the post-Spectre Arkham as one of those big sinkholes that occasionally open up which will, if need be, provide a real-world, non-occult reason for what happened to Arkham in future stories).

While Batman busies himself beating up escaping inmates who survived both Blackfire's killing of 'em and the collapse—I suppose it's safe to assume that only inmates without supervillain codenames died—Bane un-buries a still half-crazed Alfred, and together they seek to escape. Once in the sewers, they're attacked by some creature-things that I guess The Spectre missed, and then Alfred lays Bane out flat.

There's also a weird scene where Stephanie "The Spoiler" Brown is apparently a stunt motorcycle driver... 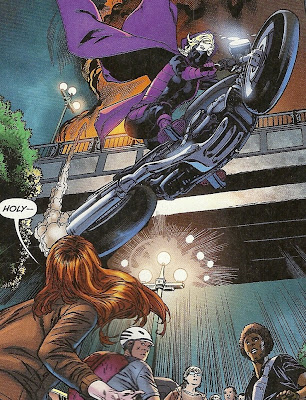 ...and then she gets clotheslined off her bike by Hush, who is about to kill her.

Is this the end of The Spoiler? While part of me would find it amusing if DC brought the character back into The New 52-iverse just to kill her off a few months later, I'm fairly certain she'll make it out of that alley alive. 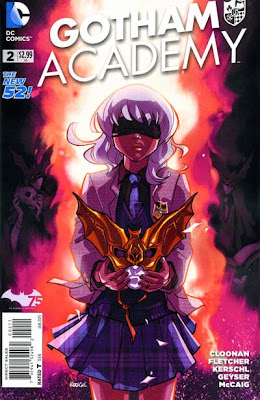 Gotham Academy #2 (DC) With this issue even more so than the first, which had a brief Bruce Wayne cameo to sort of Batman-itize it, I got the impression that this was exactly the sort of comic book DC should have been publishing in, oh, 2003 or so, and collecting them in digest-sized trades for the manga audience. The only way this comic could have read more like a manga story would have been if it were in black and white. And I, of course, mean that as a compliment. 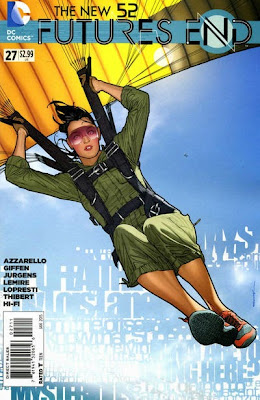 New 52: Futures End #27 (DC) This issue has a really great cover. And...well, that's all there is to say about it. It has a nice cover. Nothing else of any real note occurs within. We touch base with several of the book's ongoing plotlines, but none of them seem to have moved forward much at all, unless you count Lois Lane flying over Cadmus Island for the second time, and this time jumping out of the plane.

Oh, and Batman Bruce Wayne appears to confront Batman Terry McGinnis, but that will mostly play out in the next issue.

The only part of the interior I really took any pleasure from were the scenes featuring Green Arrow, because in every panel you can see in the middle of his beard a jagged a line that looks like it could have been a drawing of his beard, before it was re-drawn bigger.

I really like the idea of artists Aaron Lopresti and Art Thibert handing in the art for this issue, and the editor saying, "No, no! Green Arrow's beard should be twice as long as this! Redraw those beards!"

Your mileage, however, may vary. 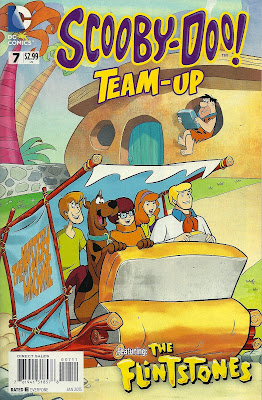 Scooby-Doo Team-Up #7 (DC) This issue raises so many questions. Scooby and the gang team-up with the characters of their fellow Hanna-Barbera franchise The Flintstones in this issue, in which Professor Albert Einstone uses his newly invented time machine to summon Mystery Inc back 10,000 years in the past.

Now, I haven't thought much about The Flintstones since I was, oh, I don't know, eight-years-old or so, but I guess I never gave any thought to when the show was set. Here we get a number, which sets the events of The Flinstones at around 8,000 BC. That seems a lot more recent than I would have imagined, given their coexistence with dinosaurs, but I suppose I shouldn't think about it too much.

"It's strange, Fred," Velma says as she and Fred Jones investigate Fred Flintstone's dinosaur lawnmower, "I thought cavemen didn't live at the same time as dinosaurs..."

Fred responds, "I thought They didn't have lawnmowers."

In the same panel, when Barney asks Daphne what the future is like, she answers him, "Surprisingly like this, actually."

Writer Sholly Fisch once more does a really rather astounding job of blending two disparate cartoon franchises into a single story, with this issue probably being the most amazing script he's pulled off, as The Flinstones and Scooby-Doo are so incredibly far apart (despite coming from the same animation studio). The comic really reads like a fairly typical Flinstones episode, save with Scooby and the gang appearing.

Einstone's time machine only works one way, so while he tries to figure out how to send Mystery Inc back to the future, he introduces them to The Flintstones and The Rubbles. Betty and Wilma are insisting that the guys take them to the opera, but they would rather go bowling. To try and get out of it, Fred cooks up a story about The Phantom of the Operrock, which, naturally, only intrigues their visitors, and so they all go. This being a Scooby-Doo comic, there really is a Phantom of the Operrock, although it turns out he's really just a guy in a costume trying to scare people away from the opera.

Fisch packs in The Gruesomes, The Great Gazoo, Bam-Bam, a reference to Pebbles cereal commercials and just about every Flinstones joke you could hope to expect. Oh, and did he slip a pot joke in as well...?

The artwork this time around comes courtesy of Scott Jeralds rather than Dario Brizuela, and Jeralds does a dead-on job on the character designs and setting. Part of me would have liked to see what a "compromise" version of Bedrock might have looked like, given how far apart the design aesthetic of the two shows are—The Flintstone characters don't even look like the same species as the Scooby-Doo characters, really, but this is probably how a crossover involving the two cartoon shows should look.

I know I only read a handful of new comic book-comics this week, so it's probably not saying much, but this was by far the best that I read. Just from a pure craft stand-point, it's a pretty amazing piece of work. 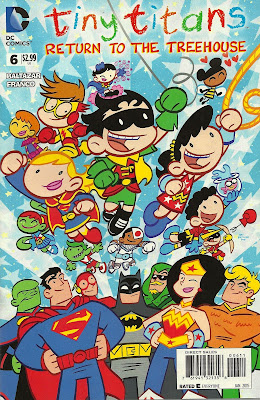 Tiny Titans: Return to the Treehouse #6 (DC) You know what they say about all good things.

Cyborg, who has "some sweet Justice League connections," uses a Boom Tube to get a group of Tiny Titans out of class and onto the Justice League satellite, where Batman is a big jerk to them, but, after a page or two of jerkiness, Batman and Superman manage to get the Titans' treehouse back from The Brainiacs. As each of the previous issues involved the Titans getting a new, less-than-ideal Treehouse HQ, they now have a half-dozen treehouses...almost a little forest of treehouses.

And then they get detention for skipping school.

This is my favorite page: 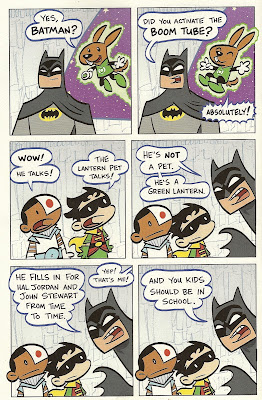 Man, I wish B'dg filled in for Hal Jordan in the pages of Justice League; it seems downright weird that there are currently three human, Earth-born Green Lanterns (Hal, John Stewart and Simon Baz; Guy Gardner's currently a Red Lantern and Kyle Rayner's currently The White Lantern), and yet the League is Lantern-less. Unless you count the new Power Ring, which I don't.
Posted by Caleb at 8:34 AM

Tiny Titans was indeed the best of the bunch. My favorite part was where Batman just flat out yells"CLARK!" when he wants Superman.

Why can't we have nice things like this all the time?