Reading Gotham Academy #2 with a librarian.

The second issue of Gotham Academy opened with our heroine Olive Silverlock in her dorm room, reading The Diary of Millie Jane Cobblepot. The entry she's reading is dated 1863 and given that "Cobblepot" is the last name of The Penguin's civilian identity (and, as recently established, the name of a particularly long-lived and influential family in Gotham City history), it's probably pretty safe to assume that Mille Jane Cobblepot is The Penguin's great or great-great-grandmother.

In the next scene, Olive and a classmate she's not fond of are given a Gotham City History assignment to work on together. While reading and researching in the academy library, they are approached by a thin, wiry man wearing the very unlikely outfit of a pair of gloves and a hat with a booklight attached, despite being indoors. Olive refers to him as Mr. Scarlett, and, as you may have heard, that makes him the New 52, DCU version of a villain from the 1966 Batman TV show.

While delivering a book to the two girls, he also hands a slip of paper to Olive, telling her, "I also think this particular book would aid you and your friend on your quest for knowledge."

Olive takes the paper and wanders off into the stacks, muttering the book's Dewey Decimal System call number to herself: "636.2, CAG." 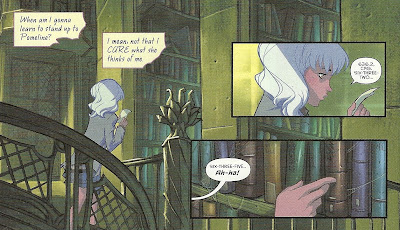 The book she pulls from the shelf turns out to be a copy of The Diary of Millie Jane Cobblepot (albeit one with a secret map and notes hand-drawn in it). There's one problem here, as you may have noticed if you spend as much time in a library as I do (That is, 40 hours a week).

A co-worker of mine, an honest-to-God librarian (as in, she has her Masters of Library and Information Science), texted me as she was reading the same scene in her apartment, wanting to know what a diary was doing filed under 636.2, the Dewey Decimal number for cattle and livestock.

A diary should appear in biography, under 920 Cobblepot, for example (although our library separates biographies out of the Dewey Decimal System, so in our library the diary would be filed under "B Cobblepot" in the biography section), or under 818 if it were a literary diary or memoir not attached to a particular subject (a memoir about livestock or cattle might be shelved under the number Bookworm gave her, however).

Trying to figure out why writers Becky Cloonan and Brenden Fletcher might have chosen that particular number, I asked if she was sure it was livestock and not, like, pet birds or something, given Oswald Cobblepot's obsession with birds. No, apparently 636.6 is pet birds, while 598.47 is penguins, if they wanted to make a Dewey Decimal System joke/sly supervillain reference.

The exact contents of the diary haven't been made entirely clear yet—based on the few excerpts we've read and what characters' say about it, Millie Jane Cobblepot apparently believed their was a dark, likely spectral force out to get her, she had some difficulties with her father and she was popularly thought of as being crazy. If she discusses livestock in great detail, it hasn't come up in the series.

"Did you recognize the librarian?" I asked. "Scarlett is the secret identity of Batman villain Bookworm."

Well, however the diary ended up in the animal care section of the Gotham Academy library—mistake, nefarious catlaoging by an evil school librarian, occult shenanigans—I know one thing. Gotham City Public Library's head librarian Barbara Gordon would have never made such a mistake in her library.
Posted by Caleb at 7:20 PM

You mess with the Dewey Decimal system at your peril!

On the other hand, would kids today even know what it was?

My students would. I've been drilling Dewey into their heads all school year. Particularly why livestock & pets aren't in the 590's with the rest of the animals.

All I can think of is the Conan The Librarian parody from UHF- "Don't you know the Dewey Decimal system?!"

The Fate of the Artist by Eddie Campbell has a much more accurate Dewey gag.

At one point Campbell imagines his own obituary, and part of it is that family found his corpse in the public library, "filed under 741.5," which is the DDS designation for comics and graphic novels.