I think Yusaku Hanakuma's Tokyo Zombie is the greatest comic of all time ever (at the moment, anyway) 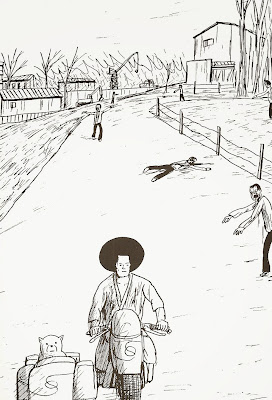 About two weeks ago I was working on a review of weird zombie manga Magical Girl Apocalypse, Seven Seas' translation and publication of Kentaro Sato's Mahō Shōjo of the End. It was a fairly typical zombie apocalypse type of story, starting out in a Japanese high school (like Highschool of the Dead, with which it shared a few other things in common), with its one big twist being the source of the zombie outbreak: "Magical Girl" stereotype characters, whose victims return to life as fast zombies...wearing frilly dresses.

At the time, it seemed to be about as weird a zombie manga as I could have imagined. While I was working on the article, I spent some time Googling Kentaro Sato and Mahō Shōjo of the End, and ran across a couple of lists of recommended zombie manga which included something with the rather prosaic, even generic title of Tokyo Zombie. It seemed to come up enough that I saw if it was something I would be able to order from the library, and it was.

It turned out to be much, much weirder than Magical Girl Apocalypse which, after all, basically only had that one twist making it so weird, and, in fact, one of the weirder Japanese comics I've laid eyes on in a while. In style and sense of humor, it seemed to have an awful lot in common with weird-ass humor comics of the West, and, well, as strange as zombies wearing frilly dresses killing people all over Japan might seem, Magical Girl Apocalypse doesn't have any scenes like, say, this: 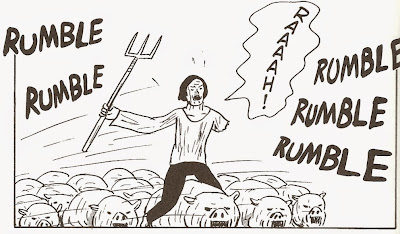 Now, if you haven't read Tokyo Zombie (yet, and you totally should, if it sounds like your sort of thing by the time you finish this post), you'll know that there's context to the panel. It's not just an incredibly weird scene of a one-armed guy with a pitchfork riding a wave of angry pigs.

The guy is a slave kept by the rich in the post-apocalyptic society that arose from the ashes of the zombiepocalypse; he loves his pigs, which the brutish guards abuse for fun. When he tries to stand up to them, they chop off his arm. As the book reaches its climax and the slaves revolt, he begs his pigs forgiveness, sticks each of them in the butt with his pitchfork to enrage them, and then rides the tsunami of angry pigs into the guards with a "Huh?" and a "!?" before he stabs one in t he face with his pitchfork, back flips over the fallen guard and gets machine-gunned to death. His pigs fight on though, eating the rich.

The thing is that even in context, the panel still stands out as a really fucking weird panel, which is one of the great things about Tokyo Zombie. So many of the gags are just as funny if you're flipping through and seeing them out-of-context (or, say, seeing them posted on a blog), or if you read the story panel-by-panel and page-by-page. It's just that kind of comic, where crazy shit happens constantly, and while there's an often strong element of the non sequitur about the jokes, they are just part of the presentation. The book does tell a story, a funny, sweet, dramatic story, a sweeping epic narrative of honor in the ruins of civilization.

According to the fine print, Tokyo Zombie was originally entitled Tokyo Zonbi and was serialized in Ax Magazine in Japan in 1998-1999, which seems like an even longer time ago when I remember where I was in 1988-1999 (still in college), and just where pop culture was at the moment, vis a vis its zombie obsession (28 Days Later was still three or four years away).

The afterword by Yusaku Hanakuma explains that he was originally planning on a 16-page story in which his usual character Afro and Hage fought some zombies (Afro is distinguishable by his afro, Hage, which is Japanese for "bald," as I learned after befriending a Japanese girl, is, of course, bald). I grew in the telling, and so, he wrote:

The result was a nine-chapter, 155-page half-serious comic presented in deadpan fashion, rendered in a rough, somewhat amateur-ish looking style more suggesting of the modern American mini-comic than what we modern Americans tend to think of as "manga style." The artwork flows beautifully, but is almost universally stage in middle-distance or long-shot images, the rare close-ups reserved for acts of gory, NSFW violence (a man's penis is bitten off by a zombie on page 11, with the sound effect CHOMP) or reaction shots from the previously mentioned little dog and/or pigs.

Chapter 1***, "Dark Fuji," introduces us to our star/s and the source of this particular zombie apocalypse. These are, of course, the Afro and Hage characters (the former referred to by the latter as "Fujio"), two laborers who are practicing martial arts on their break from...whatever their factory/wareshouse job is. A note on the martial arts: It's not the sort of spectacular kung fu one might be used to seeing in comics or films, but rather some form of grappling-like martial art. Whenever we see the pair training, they are on their backs or knees on the ground, putting one another in some form of hold, or trying to escape from a hold.

"Fujimoto from main office," a man in a suit, shows up and belittles his underlings: "Heh, you guys spend your breaks rolling around on the floor? You two sure are close, huh?"

This sequence features my favorite panel ever, due to its utter randomness: 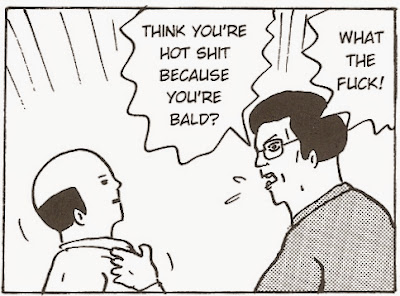 Man, "What the fuck! Think you're hot shit because you're bald?" beats out "#$%@! Werewolves! I don't get it!", another recent favorite for completely random dialogue.

When Afro/Fujio clocks him on the back of the head with a two-by-four, killing him, the pair take his body up to Dark Fuji for burial. This is a mountain made of trash, where people would dig holes to hide trash and bodies, "And sometimes the ones that got buried weren't even dead yet."

As our protagonists leave, corpses start to emerge from the ground, one of whom is a naked lady who bites the penis off a gym teacher, who was there burying the body of a student he accidentally killed. She's one of a crowd of zombies to climb out of the ground atop Dark Fuji, and then wander down into Tokyo.

Here's how the television pundits try to explain the situation... 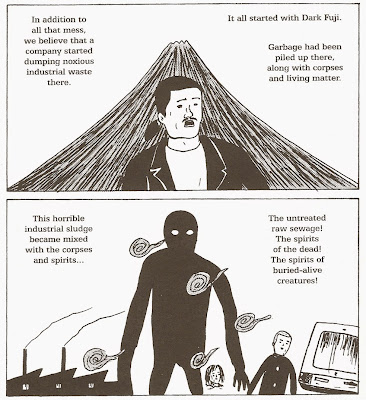 ...but those panels are followed immediately with other responding, "You don't say," and "What kind of ridiculous mumbo jumbo is this?"

Whatever's going on, there are zombies all over. Hage and Afro continue to train until zombies break into their barricaded makeshift dojo. They make a break for it in a truck, but when Hage stops to save a little dog, he gets bitten, and throws himself into he sea before he can turn into a zombie and attack his friend, instructing him to keep training and to take care of the dog.

From there, the story jumps five years into the future, with the narrator returning to tell us about the shape of the new, post-apocalyptic world, which resembles that from George Romero's 2005 Land of the Dead quite a bit.

The surviving humans have built a big city protected by a wall and a brutal, armed militia, both of which serve to keep the zombies out and the slave labor taken from the ranks of the not-rich in. And what do the idle rich do all day? Well, as the narration puts it:


For them (the wealthy), life without TV, radio, Jacuzzis, or cultural arts centers was incredibly stressful. From that stress, a new pastime was born...ZOMBIE FIGHT!


And Zombie Fight is almost exactly what it sounds like: Humans fighting zombies, in a walled-off arena from which the rich can look down on them. The fight is run almost exactly like professional wrestling, with the human zombie fighters taking on the flamboyant personalities, showmanship and moves of today's pro-wrestlers, and, the fight organizer building drama by putting zombies in luchadore masks and other such nonsense.

It's here that Afro (and his little dog) rejoins the narrative. 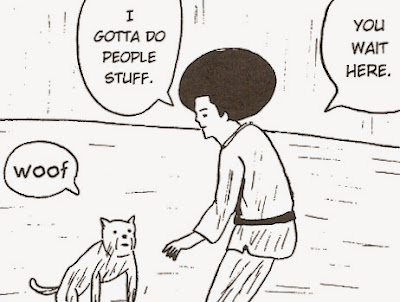 Having apparently completed his training—he now wears a gi with a black belt—he is one of the better if least popular zombie fighters, as he always wins his matches, but he does so in as boringly efficient a manner as possible.

Everything comes to a head when the crowd calls for his head, the fight promoter tries various ways to get him killed in the ring and the revolution rages outside...the various conflicts overlapping into a human vs. human war, with zombies, pigs and the little dog joining the fray: 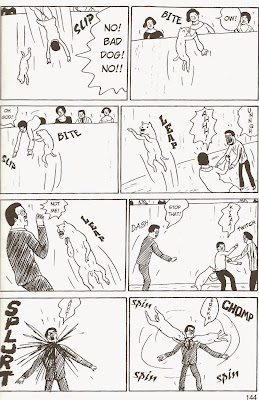 It's madness and mayhem, with the forces of powerful martial artists and animals eventually triumphing over both the corrupted living and the corrupt dead. In other words, it ends quite happily, for everyone who doesn't die horribly, anyway. But hey, most of those who died horribly either deserved it, or gave their lives doing something noble, like saving a little dog or killing those who would chop off his arm and "pig surf" on his pigs (i.e. stand on a pig's back, adopt a surfing pose and say: "Check it out. Pig surfing!") 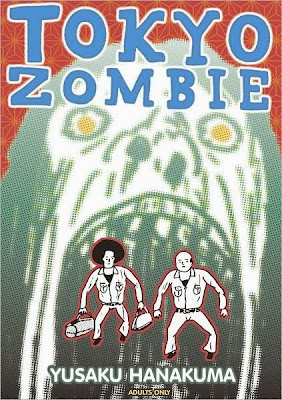 If you like zombies, professional wrestling and/or martial arts and things that are funny, and don't mind gore and occasional crude sexual humor in service of a joke, then Tokyo Zombie is a, no the book for you. I haven't read every zombie manga ever created, but I'm tempted to call it the best zombie manga ever. Just as I haven't read every comic book ever, and find myself tempted to call it the best comic ever.

*Calpis is a terrible-sounding Japanese beverage, which you can read about on Wikipedia if you want. I should note that it sounds terrible to me personally; I don't mean to sound judgmental of you and your love of Calpis if you dig it.

**That's a breaded, deep-fried pork cutlet, which a pair of guards plan to turn one of the pig keeper's pigs into.

***Interestingly, while the book is called "Tokyo Zombie," each chapter page features a full-page illustration with the title of the chapter, the words "Tokyo Zombie" at the top (in both English and...Japanese. I can't tell if it's kanji or hiragana any more, because my knowledge of Japanese culture is atrophying the longer I spend away from my Japanese friend. But I assume its kanji), but, along the bottom, these pages always have the words "Tokyo of The Dead," which is hand-lettered in an approximation of Dawn of the Dead font.
Posted by Caleb at 8:50 PM