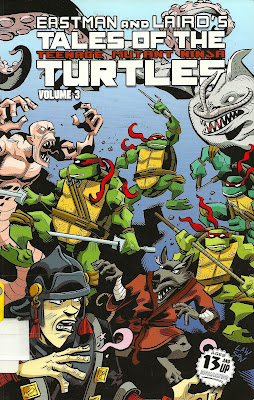 As I've been reading and reviewing my way through volume 2 of Mirage's Tales of The Teenage Mutant Ninja Turtles series, I figured it was time to check in with IDW's reprint program of the same comics. They have been collecting both volumes of Mirage's old Tales comics—the seven-issue, 1987-1989 volume one and the 70-issue, 2004-2010 volume two—in a single series of colorized trade paperbacks. Their first two collections covered the entire first volume of Tales, while this third collection features the first four issues of the second volume.

As with the previous Tales collections, this one features a new cover by artist Jim Lawson, who drew two of the five stories within (the "Seeds of Destruction" story from #2 and the six-page "The Grape" back-up from #4), and the cover scheme is basically the same as all previous Tales collections, with the various heroes (here, just the Turtles and Splinter) fighting the various bad-guys (one of the worm guys from #1, the Foot mystic from #2, the worm/shark/octopus/Oroku Saki monster from #3 and #4) in a single scene.

There are two changes of note from the original comics being collected.

First, the logo on the cover of this collection is that of the original Tales series, complete with the "Eastman and Laird's" being prominently featured as part of the logo, whereas the issues in this collection all bore the Tales of The TMNT logo, eschewing including the names of the creators and using the "TMNT" acronym, which was more prominently featured in the Turtles title this volume of Tales was tied into (I like the original logo much better, just from a simple design point-of-view).

Also, as with almost all of IDW's TMNT reprints, this collection is colorized...and no one gets a byline for doing the coloring. A Ronda Pattison gets a "cover colors by" credit, but that's it.

In the past, I've noted some strange, usually bad choices made in the colorizing process, but this volume didn't seem to have anything too egregious. The worm men in the first issue are all a fleshy, peach color, similar to that of earthworms, whereas I likely would have went with something closer to white, to reflect their centuries of living in a sunless underground cavern. And the hybrid ex-Shredder monster in "The Worms of Madness" is colored a golden brown, rather than the shark-gray I imagined him to be while reading the black-and-white original story. But these aren't mistakes, just matters of personal preference, I suppose.

This was the only panel that really jumped out at me during a flip-through as being too terribly off: 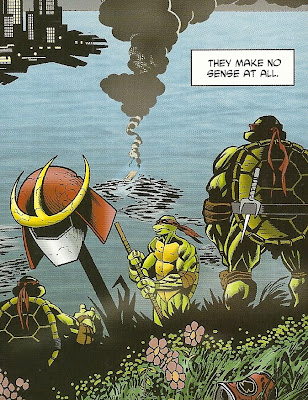 That's a panel from #3, the first half of "The Worms of Madness" by Steve Murphy, Rick Remender and John Beatty. It's a "cover" panel of one from Teenage Mutant Ninja Turtles #21, the final issue of the three-part "Return to New York" storyline in which the Turtles finally defeat the back-from-the-dead Shredder, whose helmet is always colored either gray or silver. Here, it's red and gold with a silver face plate, for some reason.

Oh, and there's a weird mistake in this Eric Talbot fronstpiece from the same issue. Check out the point of the sai in Raphael's left hand: 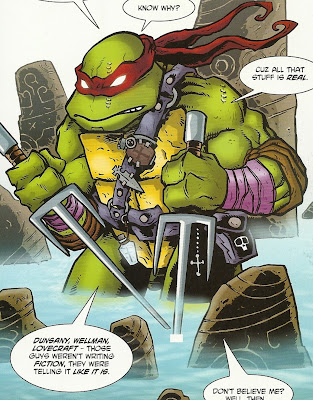 Not sure what that is, but I imagine it was supposed to be taken out before this went to press.
Posted by Caleb at 5:39 PM