There were a couple of pieces of very good news for Marvel's still rather new Ms. Marvel series, the first trade paperback collection of which was just released last month. First, the book is apparently Marvel's #1 seller digitally (and, remember, Marvel's the company that publishes all those Avengers, X-Men and Spider-Man comics), and, second, its first trade was apparently the best-selling one in the Direct Market last month, which is really quite an achievement, considering both the number of popular and exceedingly high-quality books available in the DM in October.

That's really good news for a lot of reasons, and will likely bring a lot of good cheer to a lot of folks, and not just those like writer G. Willow Wilson and artist Adrian Alphona, who probably get some sweet royalty checks. If the book sells well and continues to sell well, then it makes a compelling argument using the only rhetoric that really matters on a couple of fronts of great importance to many people. It argues the value of a female writer; it argues the value of a female protagonist; it argues the value of an ethnically, culturally diverse protagonist (the title character is a 16-year-old, Pakistani-American, muslim girl); it argues the value of allowing an artist to essentially color way outside the lines of any sort of top-down, editorially-enforced "house" style (Alphona's work on the series doesn't look much like anything else Marvel is publishing or has published before...not even previous Alphona comics); it continues to argue the value of letting particular creative teams try out highly idiosyncratic and personalized takes on solo character monthlies (i.e. "The Hawkeye Effect); and it argues the value of fun, funny comics (while Ms. Marvel is a superhero comic, it's a superhero comedy).

I myself just read the series for the first time this weekend, having waited for the trade...mostly because I thought the book would be priced at Marvel's now-standard $3.99 price point, which I won't pay for 20-22-page comics, although it was actually priced at $2.99 (There were other reasons too, most of which seem silly in retrospect after having actually read the book, including some hesitation regarding Wilson—I've loved some of her comics, and not liked some of her other comics—never being at all interested in Marvel's Captain Marvel characters, particularly Ms. Marvel, who appeared as non-entity in years worth of Bendis-written Avengers comics I read, and even that first cover gave me pause...it is a pretty terrible cover, isn't it? Most of the covers that followed it have been produced by great artists and have been really great, but even those sweet Jamie McKelvie covers have been pretty off, not really capturing the look, spirit or feel of the interiors at all).

I was pretty surprised by the book itself—pleasantly so, in terms of the quality of the book. Among those surprises were the fact that Ms. Marvel is apparently going to end up being closely tied to The Inhumans (which I guess I should suspected when they started soliciting all those awesome Lockjaw covers), and that the new Ms. Marvel's power-set has absolutely nothing at all to do with the powers of previous Ms. Marvel...she just liked Ms. Marvel, so she took her name.

I guess knew that from conversations with a friend—I know a few ladies who read Ms. Marvel, and little to nothing else that Marvel publishes—but not from reading it. Rather than having Carol Danvers' vague, generic superpowers (Superman plus energy beams, I think...?), Kamala can can stretch, grow, shrink, and take on pretty much any shape in order to disguise herself as other people or even objects.

In other words, Ms. Marvel has Plastic Man's super-powers.

This being the Marvel Universe, perhaps it would be more acceptable to say that she has Mr. Fantastic's powers, but she seems to use them in ways Mr. Fantastic rarely if ever uses them (I'm not the biggest Fantastic Four fan, but I've read a fair amount of FF comics, and I can't recall any scenes of Reed Richards shrinking, growing giant or disguising himself), and in ways that Plastic Man generally does (I think it was the many panels of her growing her hands into giant fists in particular that made me think of Plas, as an old DC Direct action figure came with giant hands attached to it*), the main difference being that Ms. Marvel can also change her coloration, whereas no matter what Plas turns into, he's limited to the palette of red, yellow, black and the four color peach of his skin (While less useful than Kamala's powers, and perhaps slightly unrealistic in the way characters often fail to notice say, a vase with the yellow and black striped belt of Plas around its middle, I prefer the comic book-iness of Plas' color limitation).

I've always loved the hell out of that character, owing in large part to just how amazing those Golden Age Jack Cole comics really are, and the fact that Plas, like Captain Marvel (the original, not one of the Marvel Cpatain Marvels), ended up surviving, but never flourishing since his 1940s hey-day; Plas, like Cap, has become something of an also-ran, and thus, even when DC is actively trying to use them, what you end up with are these compelling, interesting glimpses that serves as gateways, and then when you walk through those gateways and see what the Golden Age iterations of the characters were like, your mind gets a little blown. How on Earth did that boring-ass Captain America guy get popular in the 1960s again and stay popular, while these guys collect dust? Like that.

Plas is therefore a character you can feel a sort of ownership over. Yeah, I was into superheroes, before they went all pop culture in the Silver Age. I was into their old stuff, like Plastic Man and Captain Marvel and The Human Torch. Also, there's just something kind of fascinating about knowing there's this character out there, that there's all this untapped potential you can see, but never see really being tapped. It's kind of the way I feel about Wonder Woman, too—Golden Age Wonder Woman, Captain Marvel, Plas, they all seem like lit sticks of dynamite to me, and the spark on the fuse is never actually moving down the wick, but, oh man, if it ever actually does...!

It's probably not even accurate to call Plastic Man an also ran. It's not like he's, I don't know, The Red Bee of Firebrand. He's had his own comics now and then, at least one of which was really rather great, although it didn't last all that long (That would be the Kyle Baker one; I can't recall if it was canceled due to low sales, or because DC didn't think it fit in with the direction they wanted their line to go in at the time, or some combination of the two). Writer Grant Morrison resurrected him as a prominent member of his late-90s JLA run, and writers Mark Waid and Joe Kelly continued to play with Plas as part of the Justice League ensemble. Paul Dini and Alex Ross used him in their various Justice League related projects. And, of course, Plastic Man had his own cartoon in the 1980s, and he was one of the more frequent guest-stars on Batman: The Brave and The Bold. Not too shabby, really.

And hey, DC has recently shown a willingness to experiment with different tones and different art styles in a few of their mainline superhero comics—Batgirl, Gotham Academy, Arkham Manor, Catwoman—so maybe they'll decide to do a Plastic Man comic soon. Plas obviously can't star in a DC version of Ms. Marvel, as he's a middle-aged white guy and establishment hero, not really the sort of character who could pull off Ms. Marvel's conflicts regarding being an outsider, having trouble growing up or fitting in, or learning to be a super-powered person, but if there's an appetite in the market for people with powers like Kamala Khan's starring in fun comic books that are organically humorous, well, maybe now's the time to try another Plastic Man ongoing.

Now, where did they last leave the character in the New 52...? 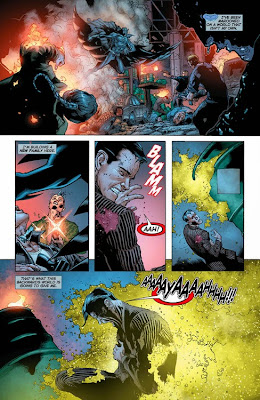 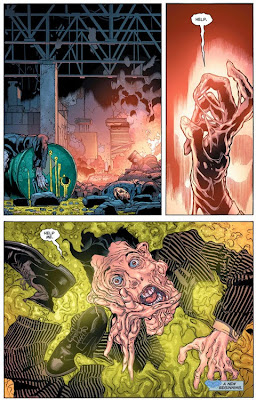 Well, nevermind then. I guess I'll just keep my fingers crossed that DC decides to publish a Plastic Man Chronicles series of trade paperbacks to get all the original Cole material out in print in an affordable format some day...


*This one, which may be the only DC Direct action figure I ever bought: 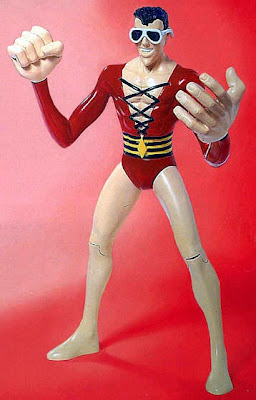 Not counting the DC Direct Pocket Heroes. I bought like a billion of those.
Posted by Caleb at 8:54 PM

Thanks for the brief review; I remember thinking the book sounded interesting and fun when the first issue came out, but like you decided to wait for the trade. I might add that there is perhaps a more direct Plastic Man analogue in the Marvel Universe, right down to the limitation on his coloration: Impossible Man, whose inability to change color was [spoiler for a 27-year-old comic] his downfall in his shape-changing battle with Warlock in New Mutants Annual #3.

My favourite use of the Plastic Man colour thing was a short Kaminski story where Plas was alone on monitor duty when a race of dog-like aliens invaded, and he scared them off by impersonating the other Leaguers one at a time to make it look like everybody was there. The first punchline was that the aliens were fine with that -- all the cool invaders lose to the JLA. The second: afterwards, J'onn congratulates Plas on realizing that dog aliens would naturally have black-and-white vision, and thus wouldn't notice the League's unusual colour scheme. Plas happily takes credit even though it obviously never occurred to him.

For the record, Reed Richards has definitely used his powers for disguise before -- it was part of his suburban camouflage with Sue in the Byrne days. (It's also a standard trick of the Elongated Man, which was used to great effect in a Flash story where the supervillain turned out to be Ralph hopped up on bad gingold.) Off the top of my head, I don't remember Reed ever using his powers to shrink or grow his whole body Hank Pym-style, but he doesn't really need to. It's more efficient to just stretch the part he's using.