Celebrity gossip followers and/or typewriter enthusiasts may have heard TMZ's report earlier this monththat Angelina Jolie put down $11,000 toward a $250,000 purchase of Ernest Hemingway's last typewriter from a typewriter collector. It was meant to be a wedding gift for long-time boyfriend Brad Pitt, but, for some reason, Jolie eventually decided not to buy the machine.

Perhaps she was outbid by someone with even more money than Jolie...? 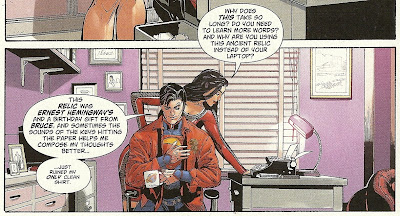 Well, given the lead time involved with the production of comic books, what a strange synchronicity that just two weeks after TMZ reported on Jolie's pursuit of a Hemingway typewriter for the love of her life, Batman buys Superman one in a comic book published just two weeks later.

This panel occurs in Superman/Wonder Woman #13, the first issue of the series by the new creative team of writer Peter Tomasi, pencil artist Dough Mahnke and inkers Jaime Mendoza (with Don Ho inking two pages; Mahnke's run on Green Lantern was one that required anywhere from two-to-four inkers per issue, for some reason). Of the three Wonder Woman books released this week, it wasn't the best (that would have been Sensation Comics), but it wasn't the worst either (that would have been Wonder Woman).

I'm a big fan of Mahnke's work, which I've enjoyed off and on since his Major Bummer comic in the late '90s; today he's one of the better DC Comics artists working on their regular DCU titles on a regular basis. He's an interesting, maybe even ideal, choice for this particular title, having had plenty of experience drawing the pair during a long if under-appreciated (and ultimately troubled) run on JLA, and in later DC Universe titles like bits of Final Crisis, Green Lantern and Justice League of America.

I also enjoy the work of Tomasi more often than not; when his comics are bad, they tend to be really bad, but to still have a strong, baseline structure to them, and to work as plots and scripts, no matter how off the characterizations might seem, or how pointless or distasteful those stories can be. I think he writes far more good stories than bad ones though, and while I'm pretty far behind in his Batman and Robin series at this point (I read it in trade), it's easily the second best Batman book; given the fact that the New 52 line consists of something like 31 Batman comics, hat's a pretty good showing (Um, I may be exaggerating slightly on that bit; someone check my math, huh?).

This particular comic falls pretty squarely into the mediocre category, I'm afraid. But hell, that's still better than bad! (And it's a great improvement over the original Superman/Wonder Woman team, which featured not-very-good-at-all art by Tony Daniel and a crack squad of fill-in artists (I reviewed the Superman/Wonder Woman Vol. 1 collection here, if you're interested). 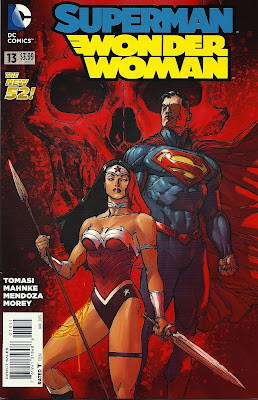 Let's start with the cover, which reveals at a glance that the comic is already better than the David Finch-drawn Wonder Woman. The cover is still a fairly generic "posed" shot that could likely adorn any issue of a comic featuring both Wonder Woman and Superman, the closest thing we get to a storytelling element being that big red skull behind them, but, well, the skull is a pretty generic symbol of the ever-present threat of death in our heroes' dangerous lives.

Unlike Finch, Mahnke goes with a very big, very strong, very powerful version of Wonder Woman. She stands straight and tall, with immaculate, confident posture and a toned, athletic build. She's unfortunately wearing her dumb, over-accessorized black, red, white and silver New 52 costume (A choker, a garter and an armlet are a little much, and I think three "WW" symbols is overkill), but I don't suppose there's much that can be done about that without editorial approval. She's also carrying a sword and a spear*, two deadly, stabby weapons that should seem super-superfluous to someone with super strength and the ability to make a fist (The similarly powered Superman, hovering just behind her, isn't carrying a blade or packing heat, you'll notice).

Do look at Wonder Woman's expression, in addition to her poster, on this cover versus on Wonder Woman's cover. She's confident, relaxed, maybe eve a little bored.

(One complaint about the Mahnke-drawn, Tomeu MOrey-colored cover? I wish there were deeper, darker blacks; part of Superman's face is in shadow, but it's a brownish-red shadow. It gives the image a sketch-like quality, but I always prefer more stark imagery, myself).

The story within begins with a flashback to the day Superman and Wonder Woman first met—the day chronicled in the first story arc of Justice League by Geoff Johns and Jim Lee; you know, the battle against the Parademons in which the Justice League united to casually murder enemies by the dozens. 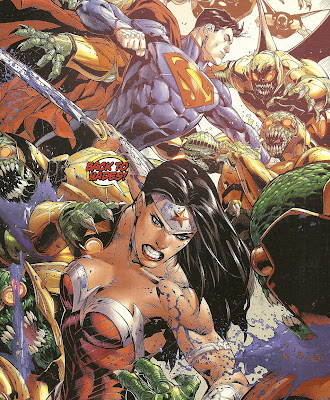 The very first page is a splash page, in which Wonder Woman and Superman are swarmed by Parademons. "BACK TO HADES!" Wonder Woman screams, while slitting one's throat, bisecting another's head and chopping another's arm off at the elbow all with one might swing.

I know we've talked about the Justice Leaguers' surprising willingness to slaughter their foes in that Justice League arc repeatedly, and the two explanations generally offered was that killing Parademons doesn't count because they are aliens and/or not human (weak, especially considering they're being fought off by alien Superman and galactic policeman on an almost all-alien beat Green Lantern) or that the Parademons are made up of some sort of Deathlok-esque combination of robot parts and dead bodies, meaning that they're not really alive.

That's pretty weak too, considering that it's no-prize thinking (there's nothing in the comic, or in this revisiting of that comic, to indicate that)...not to mention the fact that what the actual comic book does reveal is that The Parademons weren't killing anyone, they were trying to capture people alive (the League was therefore responding to non-lethal attacks with lethal force) and that they are all former victims who were being turned into Parademons against their will. Rather than seeking a way to save them, Wonder Woman was just straight up chopping them to pieces (while the other Leaguers, including Superman and Aquaman, were killing them left and right in the page of Justice League). 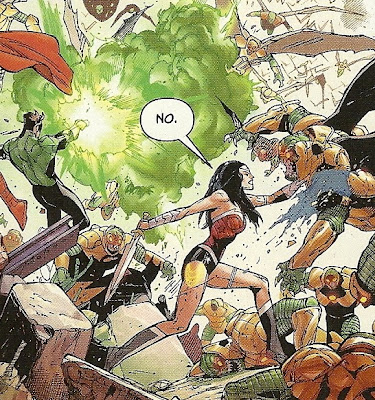 The following four pages continue the flashback to the battle, in which Wonder Woman continues dismembering**, beheading and stabbing Parademons to death.

In this issue, we don't see Superman actually killing anyone, and he and Wonder Woman actually argue tactics, with Superman asking him to help here build a buffer of rubble to keep the invaders from getting at the humans, while she prefers to kill them, getting in a nice Amazon burn at one point.

"Who did you train under?" Wonder Woman asks while Superman sets a boulder atop a Parademon and she withdraws the sword she shoved to into one's chest all the way to the hilt. 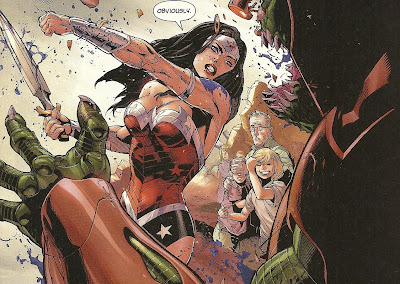 Ha ha, your dead father was a shitty fighter, Superman! (Note the background in this panel; it's easy to miss, what with Wonder Woman punching a foe's head and shattering it like an egg, but the various reactions of the three people between Wonder Woman and the Parademon are pretty fun; Mahnke provides plenty to look at in these panels.)

The pair did not get a long at all, seems to be the point, and then we flash forward to "Today," where they most certainly do.

Wonder Woman is wearing a hideous dress and impatiently awaiting Superman to finish writing on his gift from secret husband Batman so they can go on a date. For reasons unclear to me, Superman is wearing his Superman costume (I thought it was some sort of nantochech thingee that appeared and disappeared as needed now?) with a red shirt over it.

In a neat reversal of her earlier burn on Superman's dead father, Wonder Woman admires the way he uses super-speed and club soda to get a stain out of his shirt, and Superman says, "Credit my mother." 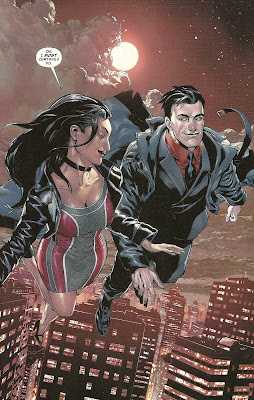 Wait, did Superman match his shirt to her dress? Where are they flying off to, prom...?

There's a cute scene about Superman giving up every taxi that stops for them in Manhattan in a freak rain storm, when an earthquake KKRRRRUMMBBBBBles, and they realize something supervaillainy's going on.

The cause of the problems are a pair of familiar supervillains, each outfitted with jet boots, and working for a mysterious employer. These are Major Disaster, who Mahnke drew exenstively during his JLA run (at the time, the villain was inspired by Superman to reform and start using his powers for good, even becoming a member of the Justice League for a while until the League's story just sort of petered off as Infinite Crisis and its accompanying continuity punches and soft reboots temporarily abolished the League, and its recent history was forgotten by the next semi-permanent-ish writer, Brad Meltzer).

The pair of villains put up a hell of a fight before suddenly cutting and running, at which point they're intercepted by a new character with the terrible costume and more terrible still name of Wonderstar.

This action scene, like the one at the beginning, is pretty wonderfully illustrated. Mahnke's great at figure work, action and expression and, in great contrast to the Daniel (and others) run earlier in the title's short history, there are pages packed with enough panels that the fight seems like a real super-powered fight, rather than a handful of poses. That is, the villains and heroes each get to use their powers in a couple of different ways to attack and counter one another. It's not exactly an action masterpiece or anything, but it is action, and that's actually something compared to so many of the fights these two usually engage in.

I'm not sure this issue was engaging enough to encourage me to read the next one, or to add the book to my pull-list, but it seems to be an improvement over the previous issues of the series I've read, and it's head and shoulders above the new Wonder Woman run.

If you only read one Wonder Woman comic, you're still better off sticking with Sensation, but if you read two, or want to read one set within current New 52 continuity, than this is your best choice at the moment.

**I've been reading a lot of Star Wars comics lately; it would be interesting to see whether those feature more arms being chopped off than DC Comics' superhero line of comics. There are a lot of arms being chopped off in Star Wars comics, but for some reason it never seems as jarring as it does in a DC comic. Maybe it's because it's usually bloodless, with the lightsabers cauterizing the wounds, making them bloodless, or maybe it's because I've grown up thinking that sometimes a Sith Lord or Jedi Knight has to chop someone's appendage off and/or kill the hell out of them, whereas seeing Superman and Wonder Woman kill enemies still seems a newer, more novel phenomenon.
Posted by Caleb at 7:45 PM