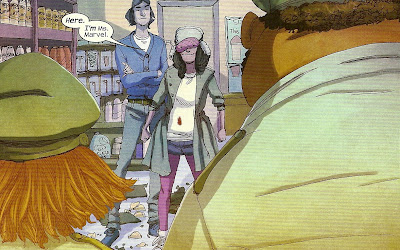 I found myself a little nervous, almost reluctant, to open the cover of this trade paperback collecting the first five issues of the hit new series Ms. Marvel. In the time since the first issue was released, the book has become very popular, it has come to be regarded as very important by a large group of fans and it has been almost universally praised online (a lot like Hawkeye before it, actually). All of which added up to my being a little wary of the book. Naturally cynical and suspicious, I worried it couldn't possibly be that good and, if it didn't live up to expectations, I didn't want to be in the position of having to be the contrarian talking smack on the Internet darling book (not to mention arguing with my friends in real life who love it, one of whom told me the above panel is her favorite panel from any comic ever, which is why I put it up top there).

Well, it turns out that I was worried over nothing: G. Willow Wilson and Adrian Alphona's Ms. Marvel is every bit as good as I heard it was, and a good deal better than I was expecting it to be.

Much has been made over the other-ness of the character, the handful of things that make her different from your average super-comic star: Not only is she a she, and a teenager at that, she's also Pakistani-American and Muslim. As conceived by Wilson and Alphona, however, Kamala Khan is more similar to her many readers (or, at least, the person many of us used to be), than she is different. She feels out-of-place in her own world, she wishes she were more accepted and more popular, she feels misunderstood by her own family and by society at large. The specificity of some of those conflicts might be a bit, well, foreign, but the conflicts themselves are universal. More than anything, she reminded me of maybe the most classic Marvel Comics character template.

Someone once said—okay, it was Chris Sims, and he's said it more than once, like here, for example—that Marvel has attempted to re-create Spider-Man each decade since they birth of their flagship charter in the 1960s. In the 1970s, there was Nova; in the the '80s, Speedball; in the '90s, Darkhawk and, in the '00s, Ultimate Spider-Man. Well, despite taking her codename from an entirely different pre-existing Marvel superhero, I think Ms. Marvel could well be the Spider-Man of this particular decade, the character having the same basic array of problems, the same super powers-as-puberty metaphors, the same basic cluelessness and desire to do good with her strange gift, she even has a pretty similar outlook, one that extends to the entire book. Kamala is funny, and her book is funny; at the risk of alienating any readers adverse to any genre that isn't superheroes, Ms. Marvel is a comedy first, and a superhero adventure serial second.

The characters origins are tied directly to The Inhumans (again, despite the fact that she's named for another character with nothing to do with The Inhumans), and, specifically, the events of Infinity, I guess, although one need not have read or even known anything about that series to follow this one: "Caught in the Terrigen Mist Bomb set off in Infinity" or just "caught in some strange, superpower-granting mist" read the same here.

After the bulk of the first issue spent introducing us to put-upon Kamala, her best friends Nakia and Bruno, her family and schoolmate Zoe Zimmerman (an inadvertent foil the characters refer to as a "concern troll," her existence kind of bothers Kamala and her friends to different degrees, but she's not a queen bee, mean girl or female version of Peter Parker's Flash Thompson; rather, she just represents the ideal of all-American teenage girlhood in a way that irritates them each in different ways), Kamala sneaks out to attend a party and, being in a place she wasn't supposed to be, she is exposed to the mist and has a weird hallucinatory reaction, being visited by Iron Man, Captain America and former-Ms. Marvel, current Captain Marvel Carol Danvers (Kamala writes Avengers fan fiction in her spare time). 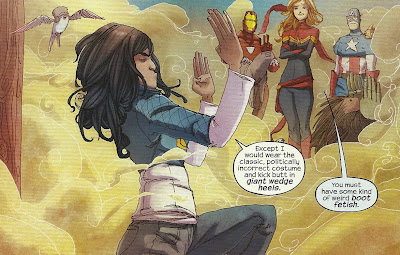 During the conversation, she tells Carol that she wants to be her, "Except I would wear the classic, politically incorrect costume and kick but in giant wedge heels."

When she wakes up, she is, right down to the paler white skin and long, blonde hair.

The mist gave Kamala powers, but they're not Carol Danvers' ill-defined powers; instead they're basically Plastic Man's powers. Wilson doesn't pound it home in this volume, but apparently Kamala keeps the Ms. Marvel name just because she admires Carol Danvers so much and, well, Carol's not using it at the moment. As for her actual powers, they are just as visually fun and, well, comic book-y as they've been in various Plastic Man comics before. The ability to change one's identity, to shrink or grow, and to have various body parts change and grow as if they had a mind of their own make for pretty potent teenage metaphors; visually, Kamala's identity can be pretty fluid, even chaotic, especially when she's not entirely in control.

The following four issues involve Kamala's trying to deal with her weird new powers, trying to keep them secret, trying to decide who to keep them secret from and who to tell about them, and facing her first trials by fire. These are very teenage appropriate, particularly for a character basically just stumbling into superheroics: She saves Zoe from drowning, rescues Bruno from a stick-up (sorta), and makes repeated attempts to rescue Bruno's brother from the clutches of the teenage minions of a new villain (failing once, and then succeeding after a training montage).

I've found Wilson's DC Comics writing to be somewhat uneven in the past—she's responsible for excellent original graphic novel Cairo, short-lived Vertigo series Air, a Vixen miniseries and an Aquaman one-shot tied into one of the many Outsiders re-relaunches—but this is by far the best comics writing I've read from her. Hell, it's some of the better super-comics writing from anyone I've read lately, and it reminded me quite a bit of Brian K. Vaughan's Runaways—there's something quite Molly-ish about Kamala—which is probably as appropriate as it is inevitable, given the fact that her artist is Runaways co-creator Adrian Alphona, who has been away from Marvel Comics for far too long.

While his artwork, here colored by Ian Herring, is undoubtedly the work of the guy who used to draw Runaways, it's quite remarkable how much he's changed and grown since then, particularly if you've got a Runaways trade handy to flip-through.

His character designs are perfect, from the fashion to the faces; Kamala looks every bit as distinct as Kamala as she does when she's wearing her Ms. Marvel get-up. His artwork has gotten a lot looser, a lot more busy and he seems to be really enjoying himself, filling up the panels with playful, often silly details, from the labeling of the products at the Circle Q corner shop Bruno works at to the signage in the backgrounds to a surprised cartoon squirrel falling out of the tree by Kamala's window when she attempts to sneak in. 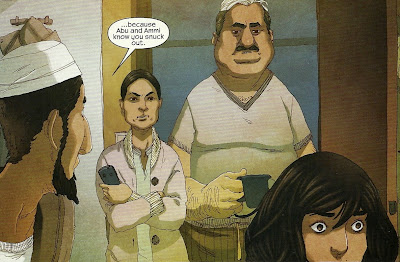 Alphona straddles the line between cartoony and over-the-top, drawing various adults at very large sizes, often with oversized, Muppet-like heads and/or hands, which may not be the best choice in a comic book about a superhero whose power is generally demonstrated via hand-"embiggening." Ms. Marvel has been blessed with some pretty great cover artists—Sara Pichelli, whose homage to Supergirl #1 got some attention, Jamie McKelvie and, for a variant at least, Arthur Adams. And all of the covers are nice, but they don't seem to fit the comic very well; if you just looked at the covers, this would look like an awfully serious series, starring a much more straightforward, even generic super-character than the one who's actually starring in it. Hopefully Alphona will get to draw his own covers as the series goes on.

I have some other, equally minor concerns about the series, like linking the character so strongly to The Inhumans, Infinity and Carol Danvers/Marvel's Marvel characters. After I finished reading, I thought back to DC's 1993 "Bloodlines" event, which introduced "New Blood" superheroes to the DCU, among them Garth Ennis and John McCrea's Tommy Monaghan, star of Hitman. Apparently created before "Bloodlines" and just sort of squeezed into the DCU through it, that became a bit of baggage regarding a character that proved more popular and more successful than the event DC meant o serve as a springboard for him.

Wilson and Alphona's work here, and the characters they've created, are obviously strong enough to stand on their own, and I can't help but wonder to what degree the connections to the wider Marvel Universe might prove a help or a hinderance in the long run. As for Ms. Marvel, my complete disinterest in Carol Danvers and Ms. Marvel/Captain Marvel was at least one factor in keeping me from reading this series when it was originally released, and I forsee those talking about the book always having to distinguish between Kamala and Carol, with a "Not that Ms. Marvel, the new one," in the same way that, say, talking about Blue Beetle or Robin or Batgirl is never as easy as talking about, say, Wonder Woman or Batman or Spider-Man. I have to admit though, I do like the legacy-carrying-as-act-of-fandom presented here. Outside of a hallucination, there's no scene where Captain Marvel Carol Danvers appears and gives Kamala her blessing to use her old name, or passes on her costume or anything—Kamala just digs Ms. Marvel, and decides to become her, despite not even having powers anything like hers. There's just something extra-relevant about this kind of legacy character in 2014, I guess.
Posted by Caleb at 8:25 PM

I'm glad that you like the new Ms. Marvel, because it is one of the funniest, and...well...sweetest books to come out in a very long time.