I tried to remain at least a little bit coy regarding the villain in my hastily-written review of October 20's Superman/Batman #77, but it's been about a week and a half, so presumably anyone planning on picking up the book has done so by now. And since tonight is Halloween, a post devoted to The Scarecrow seems apropos.

The villain menacing Supergirl and Robin Damian Wayne in the Halloween-themed Superman/Batman #77 is, of course, The Scarecrow, my favorite Batman villain and one of my favorite comic book characters in general—from a design stand-point as much as anything else. I've always loved the way that almost every artist who draws him does so differently, and yet their depictions almost always turn out looking "right."

The artist for this particular issue of Superman/Batman is Ale Garza, with Oliver Nome inking. 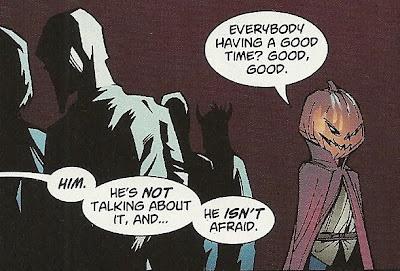 When we first see Garza's Scarecrow, he's wearing a costume over his costume, since he's attending a Halloween costume party.

The jack o' lantern head is a pretty appropriate disguise for a scarecrow.

Supergirl notices that the fellow in the cape and pumpkin head is the only party attendee not talking about a recent spate of murders nor seemingly atwitter with fear, so she accosts him, giving us a better look at this Scarecrow's attire: 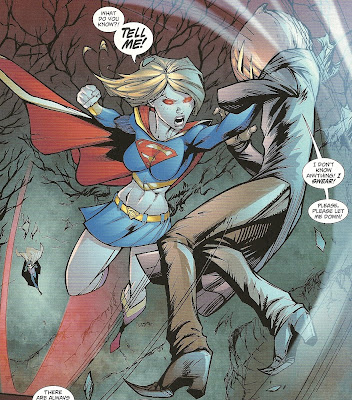 Very nice footwear! They say both "rustic" and "villain" at the same time, and are pretty far removed from the scarecrow socks tied with rope that the character usually wears.

The villain retalliates by PSSSTTT-ing Supergirl with a special, Kryptonian-strength fear gas, in a scene which gives us a nice view of his ascot: Or weren't you looking at The Scarecrow's neckwear in this panel? Perhaps something else caught your eye? (This is a pretty good example of how Supergirl wearing shorts under her skirt can be sexy without ridiculously impractical. That is, flying around in a skirt might seem kinda stupid, so sure, put her in shorts—short, tight shorts are still kind of sexy, though, so it's not like a single sensible addition to her costume suddenly makes her look puritan (Not to go off on a tangent about a different character's costume or anything here but, for the record, I don't care for this Supergirl's costume at all. I like it with shorts better than without shorts, but the half-shirt, the belt, the mini-skirt, the triangle-shapes on her wrists and the bottom of her shirt...I don't care for it).

The Scarecrow is wearing that pumpkin head for most of the panels he's in, so there isn't a really good image of him in his "real" costume in the book. I think this is the panel in which Garza draws him sans pumpkin the biggest:

Not sure what he hopes to accomplish with that wooden stake there.

Here's a close-up of his face: 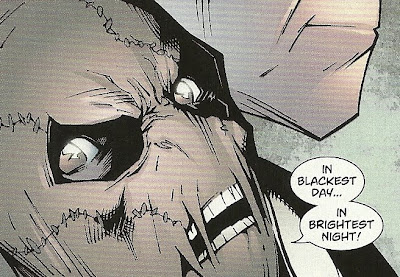 Garza draws the mask as if it is stitched togehter from several too-small pieces of cloth. I'm not crazy about how it looks close-up, but I do like the shape of the head. Generally he's wearing a hat of some sort, or, if he's not, his mask gives his head more of a bag or hood-like appearance. I like how this gives him a smooth, round head—he looks vaguely like a Dum-Dum sucker.

Finally, here's my favorite image from the book. Once the heroes KO Scarecrow, he collapses like a bug in an advertisement for some sort of household pesticide: 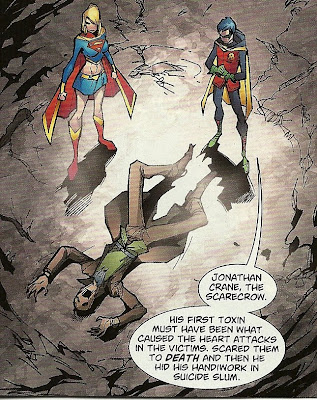 And that's Ale Garza's Scarecrow. If you'd like to see more of his Superman/Batman #77, you can download a short preview here (The Scarecrow's not in the preview, but you can see Garza and Nome's rather distinctive version of another Bat-villain in it).
Posted by Caleb at 7:55 PM

Interesting. I had a table adjacent to Ale's in Artist Alley at Long Beach Comic Con. Had no idea what books he worked on. Now I do.